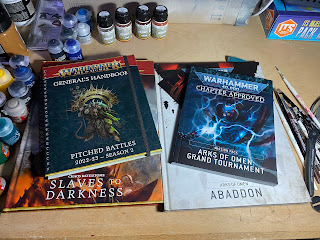 With the Infinity tournament the weekend before last, I didn't get much painting done, but I have had a few bits and pieces turn up so thought I'd share what I've got and what I'm planning to do with them. First up, I got the latest Games Workshop releases.
For Warhammer 40,000 I got the latest Arks of Omen books - the tournament rules and the Abaddon book that gives the rules for Boarding Actions. I'm definitely adding 40K Boarding Actions to things I want to try having read the rules - they really seem like my kind of thing. For now I have enough Deathwatch to try the rules out, but 500 points is a really nice size to make a fun little hobby project.
The Age of Sigmar Pitched Battles book doesn't have anything new new in it that I'm particularly jazzed about. I need to get in a game with my Stormcast Eternals. However, reading the new Slaves to Darkness book makes me very thoughtful about putting together a Chaos force one unit at a time rather than collecting piles of models and then trying to get through them. It's not high on the priority list right now, but I'll look into it once I've got in a game or two. 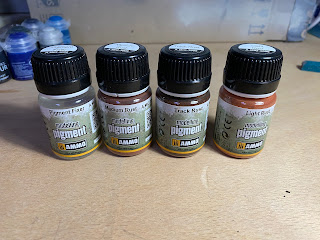 I picked up some rust pigments by Ammo, along with some pigment fixer. They're going to be one of the things I try to try and solve my Heresy Basing Problem, but there's probably a bunch of other stuff they'll do once I've learned how they work. 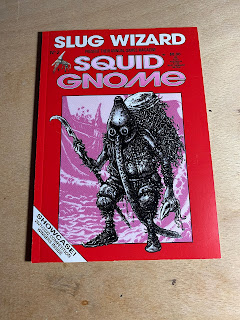 Next up is the Slug Wizard "Squid Gnome" zine. I think I saw this over on Mastodon and decided to pick up a copy out of curiosity. It seems to mostly stem from a hobby challenge someone ran, done up in the style of an old White Dwarf. 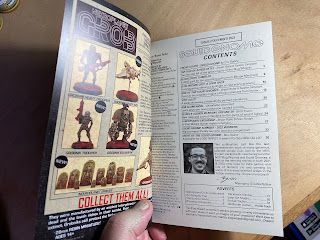 There's retro style ads for existing small hobby companies, some little mini games, and a couple of articles about the lore of the Squid Gnomes, along with the painted models of various people who entered the competition. I feel like this will probably have meant more to the people involved in the competition or who had heard about it when it was happening - but it's a really high production value for a small niche little thing, and I really like it for what it is. 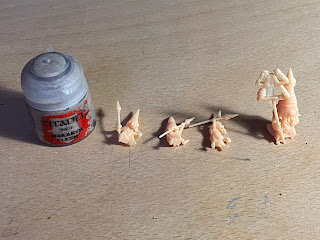 I also got some 3D printed miniatures from the Slug Wizards. I included a paint pot in the first picture because they're really small! 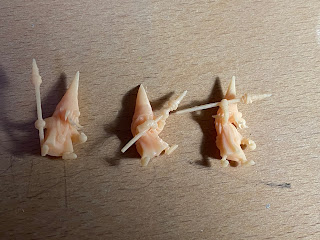 Here are three tiny squid gnomes, complete with spears, ready to be angry at things. 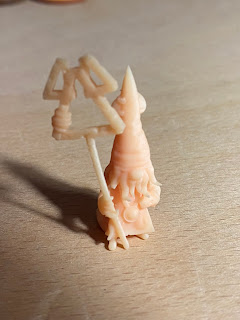 There is also a bigger squid gnome who has a big symbol on his staff so he's probably important. All four of them have gone into the box of "weird minis I'll paint at some point to be picked out when the whim takes me. 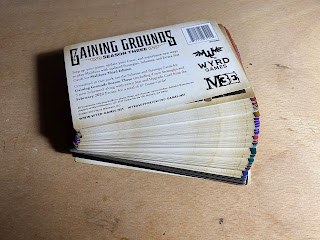 I also picked up the new Gaining Grounds Season for Malifaux. Another sorely neglected game... 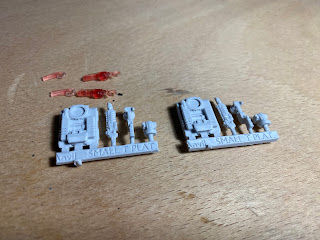 I also decided to pick up some models to proxy as Sidebots for my O-12 bike. While Monstrous Makings does make a "Judge Junior", I'm not fond of the Judge Dredd nod so went with something a bit more realistic from Anvil Industry (although they're not as fast looking as I'd like). I did grab some 3D printed weapons from Monstrous Makings to replace the default gun with, though.
Looking forward to the coming week, I'm hoping to have an assortment of undercoated models up on the blog for Work in Progress Wednesday, and a report back from the Wayland Infinity tournament on Friday. In between writing the blog posts, I want to try and get the test bases done for the Alpha Legion, finish up one of my palate cleanser minis, and maybe blitz a mini project like the Dungeon Fiends or some Scatter terrain.
I'm also planning on entering the "Mayacast Masterglass" competition, but part of the rules of that competition say no posting pictures of the models online until the photos go up in April, so you'll have to show some patience on that one!
Posted by The Responsible One at 19:00

Email ThisBlogThis!Share to TwitterShare to FacebookShare to Pinterest
Labels: Age of Sigmar, Infinity, Malifaux, This week, to do, Warhammer 40K