I have really started to motor along with getting things done now!

The silos are now fully assembled, although my wife has disputed the "fully assembled" part of that and has confiscated them to fix some slapdash approaches in assembly. She also fixed the broken handwheel on the door, achieving her first thing to do! I abjectly failed to get some pictures of them in all their glory.


You've already seen the fiction from one of my two battles against Grey Knights - perhaps the other one will come soon!

A lot of this month I've been doing some painting on one of Sim's commissions - just getting the base coating done to save her time. I'm only really doing this on commissions for friends right now - I feel like people are not just paying for the paint job, but for the sheer awesomeness imparted by the miniatures being in the presence of my wife. I got a bunch done, but they aren't due for a while, so I've put them to one side once they began to get to me, and moved on to something else.

(This does, notably, indicate to me that I really shouldn't take up commission painting. The idea of an external deadline just takes all the joy out of it, when I'd far rather switch to another project when something starts to drag...)

So, this afternoon, having put away the other work, I hit my own stuff. The Vindicare has now had a lick of paint as I try out the method of painting black suggested in the Eavy Metal Masterclass. It's looking good so far!

I've also got a little progress on the Imperial Beastman:

You'll notice I've taken off his right arm for painting - that's now glued to a lollipop stick for ease of access. I also got all the bodies, heads and horns that I need for the two squads I'm planning on putting together. A Catachan Battleforce (for all the muscled arms you'd ever need) is now on my Christmas list...

The Collodi crew now have more paint on them. I realised when I got them out again that I'd been leaving far too much very dark purple on them which just looks black under most lights. I'm correcting that now and going a little faster and being a bit less precious over them. Hopefully this will pay off.

Collodi's hands are still separate. They stare at me, accusingly.

I've also started sorting out my Malifaux corpse markers, in the hope that they'll be a quick win that I can post some nice progress shots of shortly. Also, I need to learn water effects!

I plan on writing up the rest of the entries for the blog this year this evening, and set them to auto post. That should keep people interested and happy! 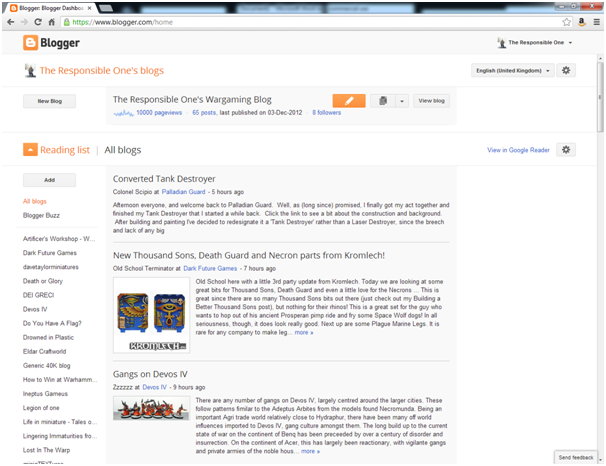 Vast quantities of these views come from the two posts I put up about stuff I found out at Games Day. Still, I'm pretty happy people are reading what I'm writing.

I am hoping that "time spent with family" over Christmas where I won't be able to paint or model can be counteracted by the days I've taken off between Christmas and the New Year, so I won't lose too much progress.
Posted by The Responsible One at 21:51