Learning water effects, and progress on a Herald and Collodi's crew

Having been listening to the Independent Characters podcast quite a bit recently, I decided to throw together my own Kanban board as well as my ongoing burndown chart / spreadsheet of everything ever. 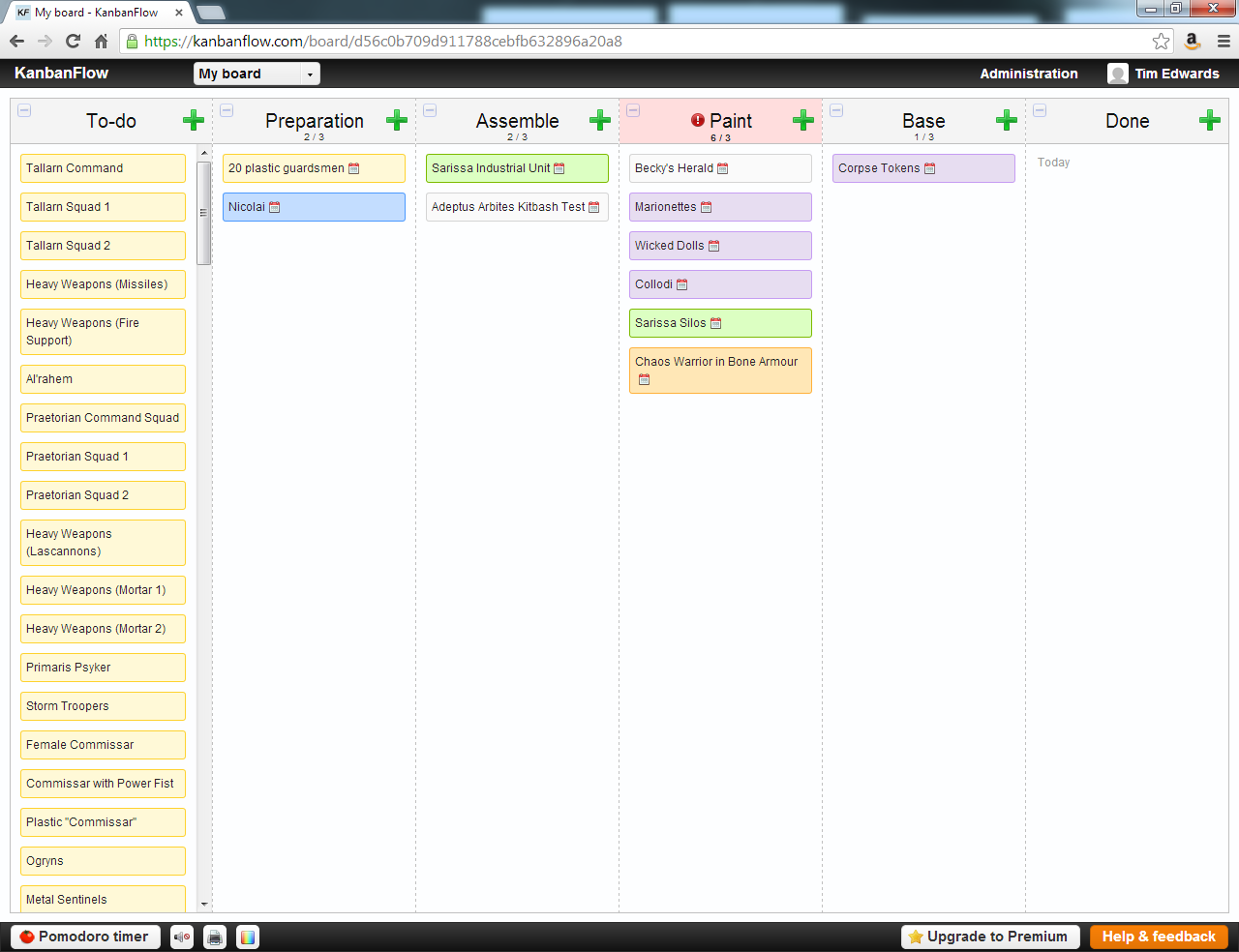 Ah, so a lot of admin to tell me that I had far too many unfinished painting projects. Perhaps I should have worked that out myself?

So, as the thing that would take the longest to see the results in, I started out by trying to learn water effects. 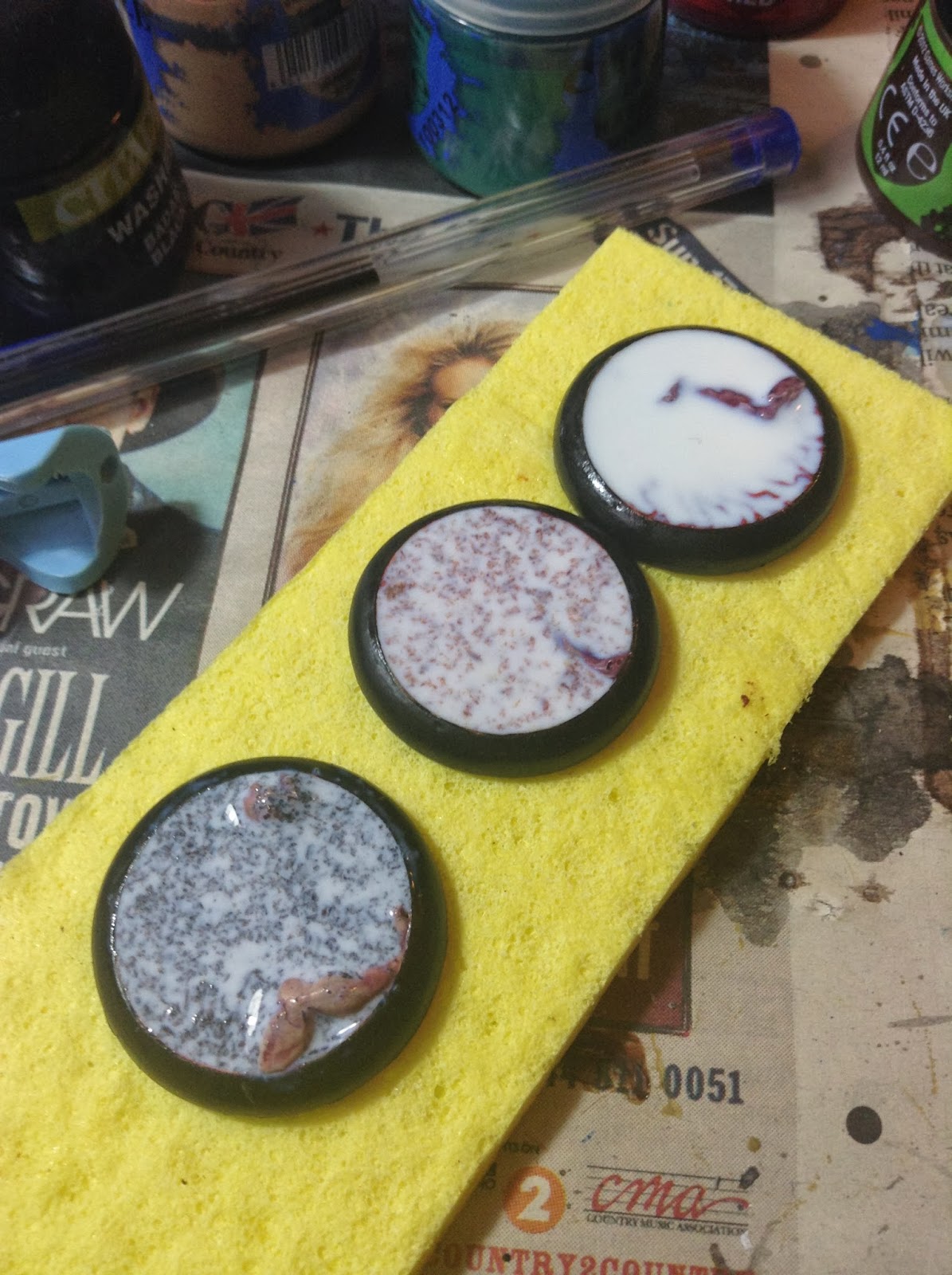 That grainy thing really, really had me worried. I had no idea how it was going to turn out. Twenty four hours later... 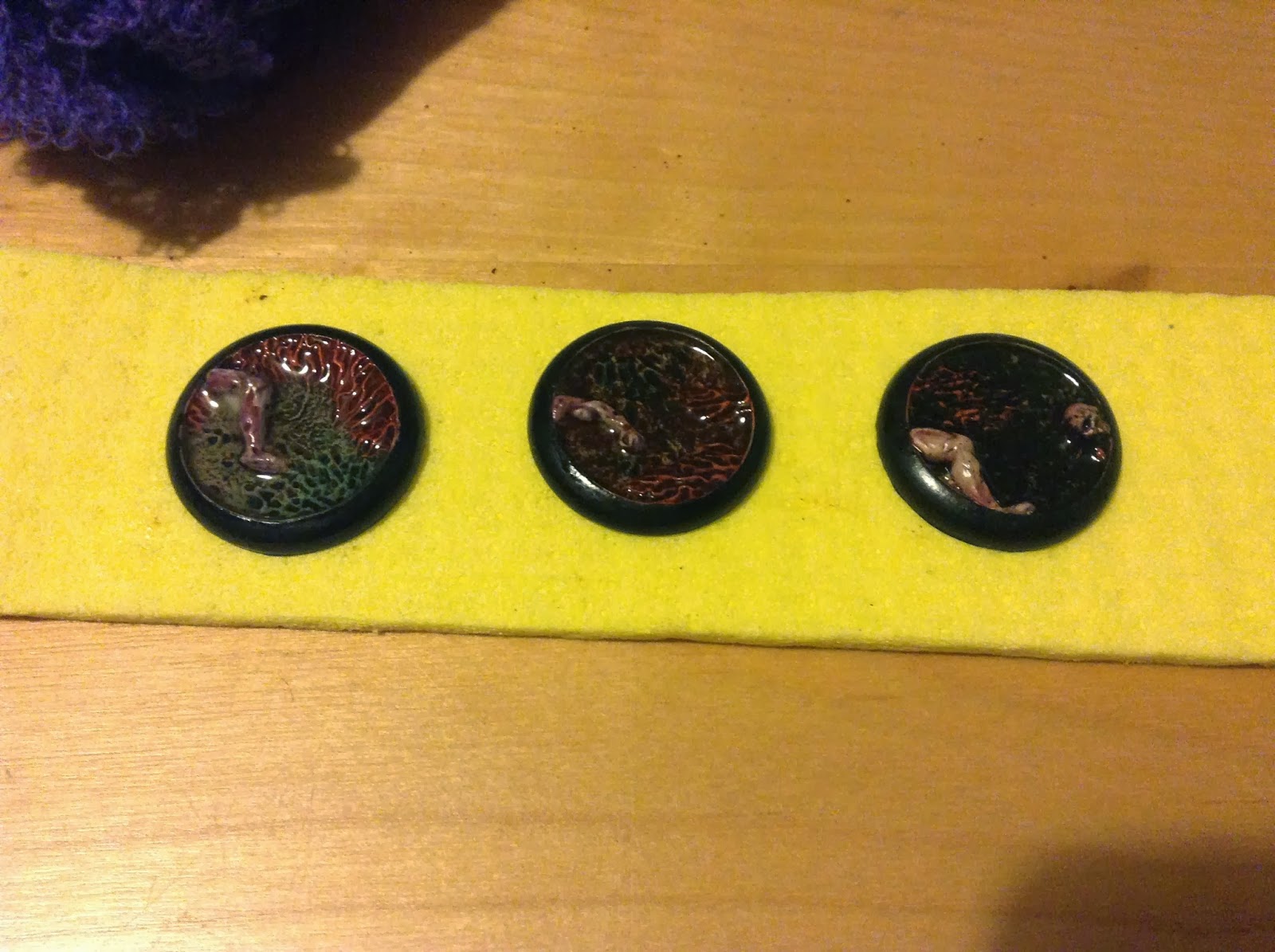 This is not a great photo, but the 'top to bottom' is now going left to right. Clear water effects are, well, clear water effects-y. The Sepia looks OK, if maybe a little dark, and the Agrax Earthshade is definitely way too dark for anything I'm trying with my swamp water. If you were wanting something really unpleasant without much detail showing through from underneath, though, you may want to consider it.

You'll also notice that the water has shrunk right down. That means I'm going to need to do a second layer. I'm also considering doing some other combinations, such as clear water effect, washing the top, then another clear layer - or sepia mixed with water effects, then clear in the second layer.

I am inordinately glad I'm experimenting with my corpse tokens, and not miniature bases with miniatures up to their ankles in water... 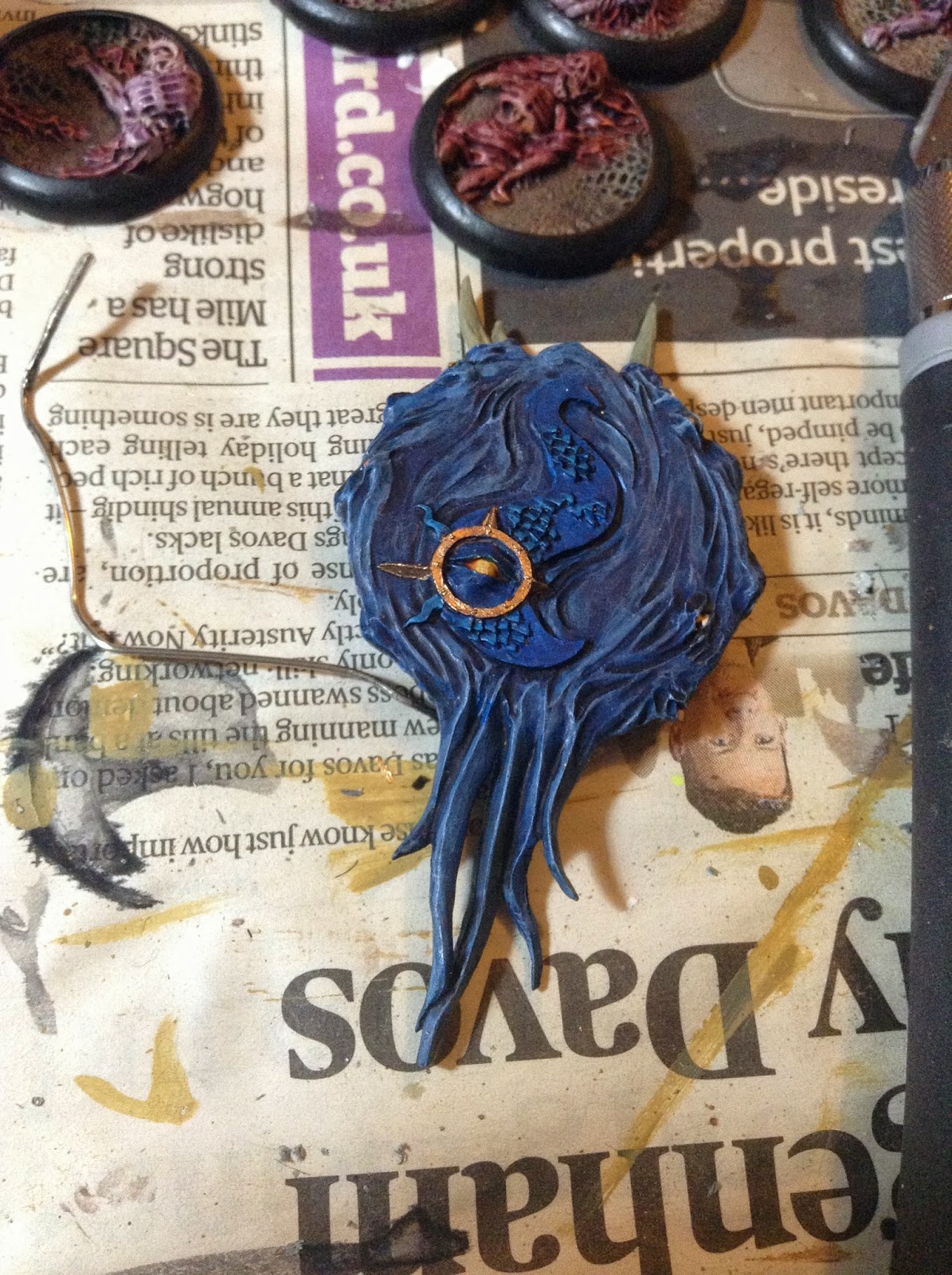 The Herald of Tzeentch is rocking along nicely now. He's a project for a friend. Here's his disk starting to get done. I tried Vallejo's Liquid Gold for the first time, and I will say, if you remember to shake it, this stuff is amazing. But it is alcohol based, so don't use your expensive brush, wash the brush thoroughly, and don't try and mix it with water - if you need it thinning, use white spirit.

You may also notice that the eyes are using the same trick I did on my Beastman - white base coat, yellow glaze, then orange wash. They've turned out very nicely. This one just needs a little ink to bring the gold back down again, touching up a few spots where paint has gone over the lines, and re-blend the underside of his tail where I managed to lose some of the work I'd already done with some over enthusiastic nonsense. 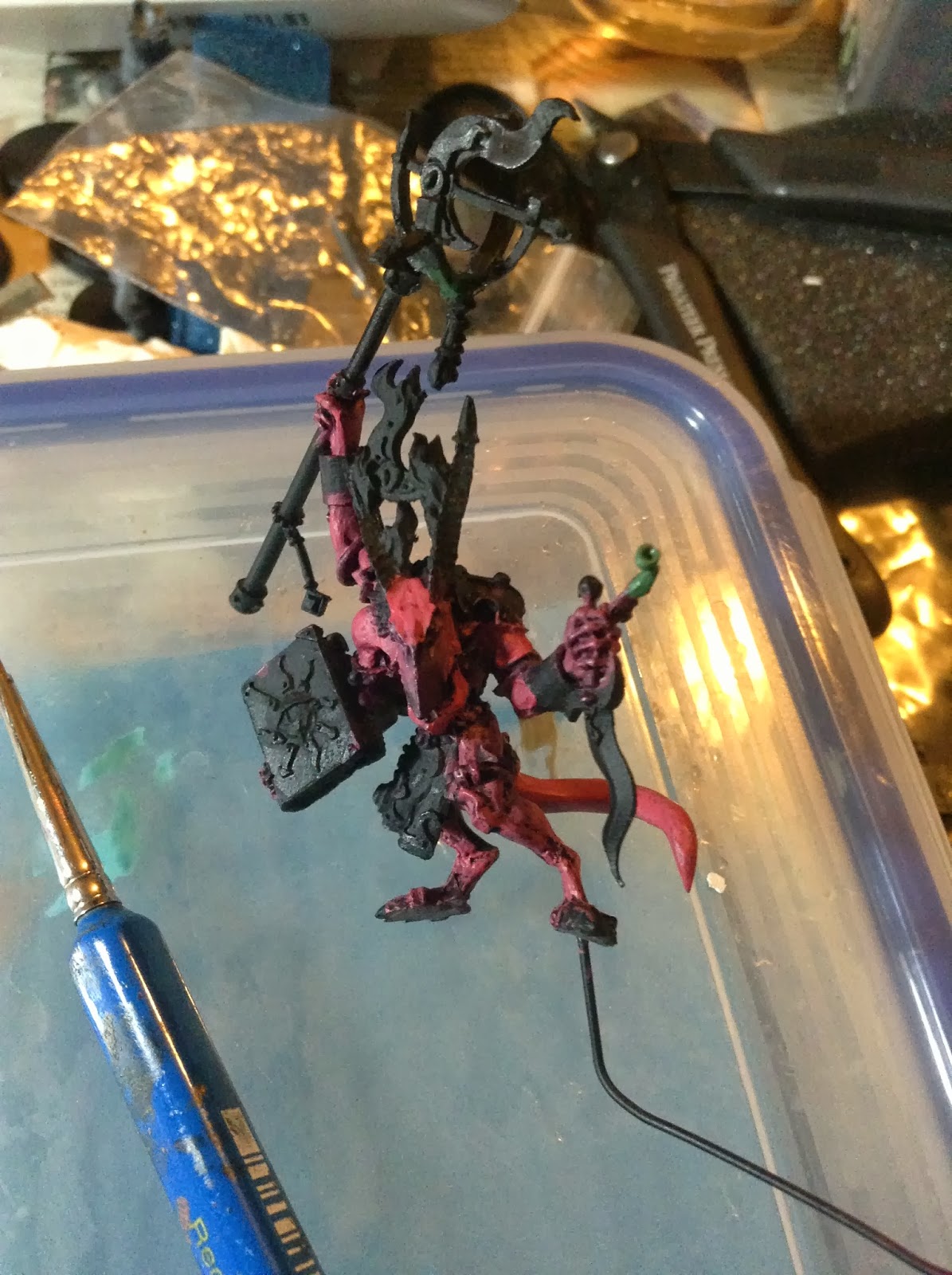 And here is our passenger, who is not as far advanced. He is ridiculously fragile, and a pain in the wossname. I had to ask my darling wife for some help in sorting out his finger, which she has now green stuffed a replacement for. There's also a pin inside that green stuff, so there's probably now more structural integrity in the hand than there is in his entire arm.

The staff has also been an absolute nightmare, and some of the stray fiddly bits there needed pinning to stop them making breaks for freedom. I do generally like Finecast as a material for larger pieces, but the Games Workshop obsession with ridiculous fiddly detail which is easy to break off is a grave mistake for models which will actually be used for gaming.

My wife is a saint and a genius, without whom I would probably have admitted defeat on this poor chap. She is awesome and I don't tell her this often enough. 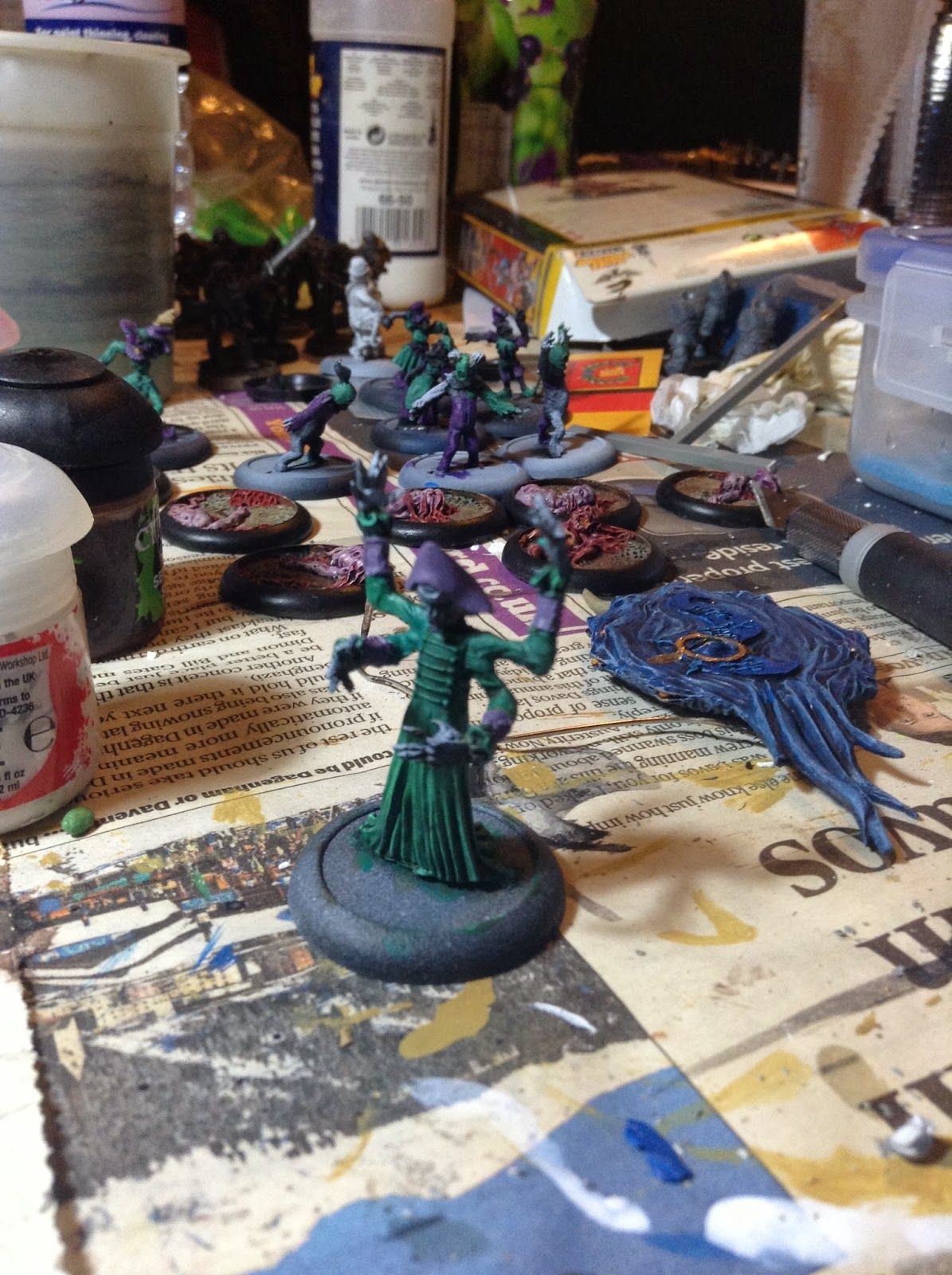 Collodi and his crew are blocking up a big section of my Kanban painting column. I decided getting them over into the basing column would really free me up to get some other things done. 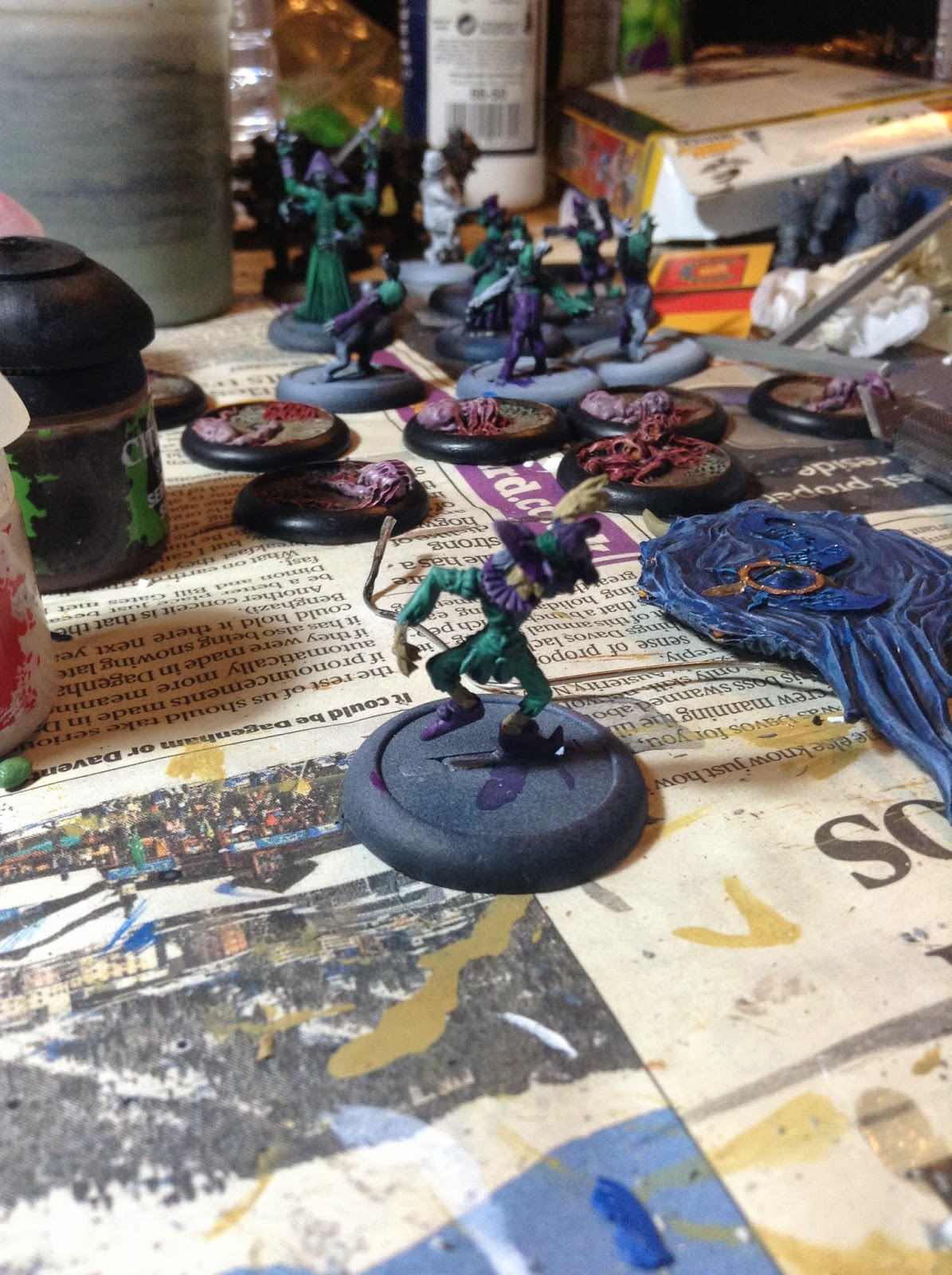 Here's the start of the first Marionette's wood being done. The green on all of them has now been completed, brought up to a much lighter tone closer to the box display.

That's all I got done this weekend - nothing is really finished, but the unrealistic targets at least motivated me to get a bunch further along. Here's hoping that the current pace continues somehow!
Posted by The Responsible One at 23:59

Email ThisBlogThis!Share to TwitterShare to FacebookShare to Pinterest
Labels: Collodi, Daemons of Chaos, Finecast, Malifaux, Painting, This week, to do, Wife