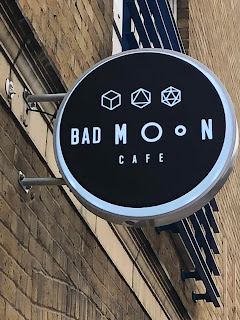 Last weekend was the Grand Opening of a new London gaming venue - the Bad Moon Cafe. It's in South London, a little south of Borough Tube Station on Great Dover Street. 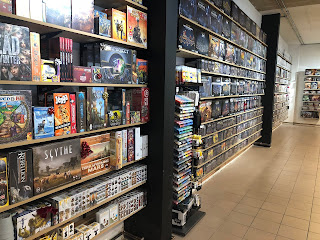 The in store stock is primarily Games Workshop, with a reasonable stock of board games as well. I abjectly failed to get a decent photo of the bar, but they serve beer (after 5pm), pastries and soft drinks, and can also order you pizza from a nearby takeaway. 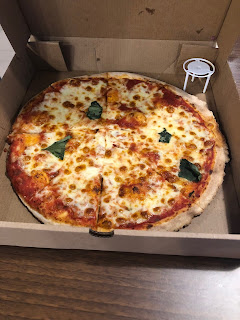 In order to provide a full and comprehensive review, dear reader, I was forced to order a pizza. It took a little while to arrive, and was dear but not eye watering (unless you're not from London). I am pleased to report that it tasted excellent and was absolutely worth the price. The cookie I ordered to eat on my way home was also well worth it. 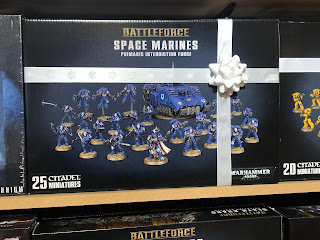 Your intrepid reporter is also pleased to report that he did not buy a Battleforce on a whim because "I'm planning on using all these figures in my new force anyway", and is continuing to at least try to paint more things before he buys new stuff. 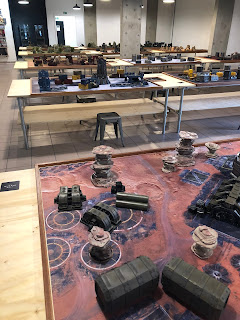 There are plenty of tables for gaming. At the moment they're set up for either Age of Sigmar or Warhammer 40K, but there's plans already underway for a Kill Team / Necromunda board. 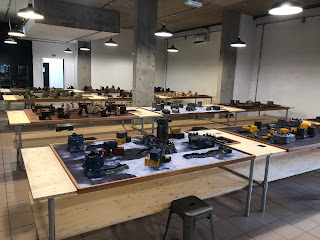 The space has clearly been set up by gamers. The nice tables (more on that to come) are well spaced, both in the space you have to move, and also a bit of room to place miniatures or rule books between tables. There is good light, and there's stools to have a bit of a rest on in your opponent's turn. 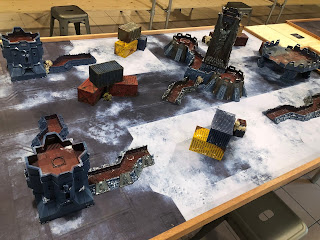 The terrain is all painted and not too sparse, at least for Games Workshop games. There are nice mats on every table, and you can see there's a small lip around the table to stop dice escaping or miniatures making a break for the floor. 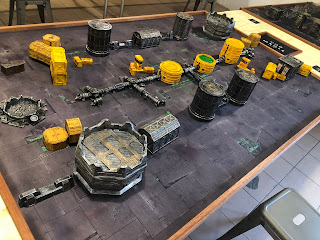 The terrain at the moment is a mix of Games Workshop produced terrain and a bunch of tables using pre-painted scenery from Gamemat.eu. (A smart move if you're opening a gaming store with a good dozen tables or so to populate with scenery.) 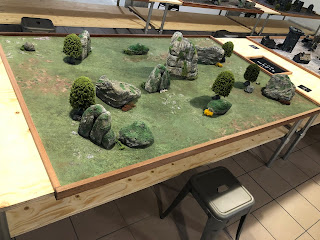 It's not just 40K that's catered for, either - there's a good few fantasy tables set up for Age of Sigmar as well. 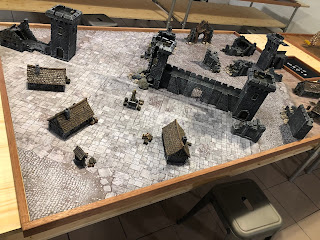 You can also see on a few of the photos that there are cafe branded dice trays to roll your dice in as well. It's a nice touch. 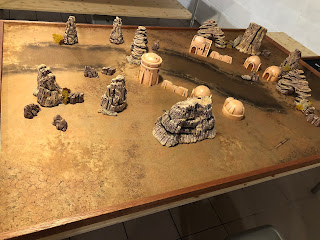 The gaming tables are varied and nicely put together. There's no weak ones that I can see, and I'm definitely keen to get down to the cafe at some point to get a game in. 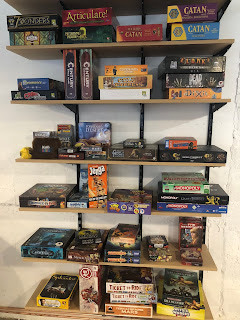 There's also a shelf of board games you can play should the mood take you. They're right next to some student accommodation so I can see this getting a bunch of use as well. It feels like they've thought about their business model carefully.

The owner was also wandering about asking for feedback and writing up the feedback and snag list. It was mostly small stuff - pizza taking a little long to arrive, the lack of hooks on the back of the toilet doors and a lack of low sugar options for the soft drinks (I wanted to assuage my guilt for the pizza but was unable to). The fact they're asking about these things up front is an excellent attitude to have and hopefully that will help them improve as they go.

So, all in all, a big two thumbs up from me for the Bad Moon Cafe in London. It's worth a visit. But more importantly, it looks like it's going to be useful for gamers looking for a venue. I'm a massive fan of both HATE and Dark Sphere, but the market is big enough for more gaming spaces. It looks friendly and welcoming, and the amount of space to move around and nice tables is really drawing me in. I was already planning on getting some 40K games in the new year, and I might be playing some of them here...
Posted by The Responsible One at 19:00