Trying out Warhammer Underworlds (AKA Shadespire) 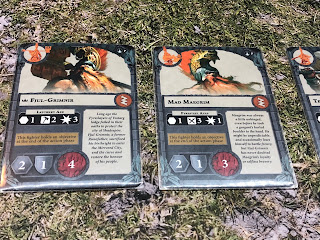 I've mentioned trying out Warhammer Underworlds in a previous blog post, but I thought it merited its own dedicated post. For those who haven't encountered it before, Shadespire is a 2 - 4 player skirmish games played out on a hex board. You use a fixed set of miniatures, but use two decks of cards with objectives and tactics that you can change to vary how the models play and what you're trying to do to win.

For the purposes of the demo game, I borrowed our tutor's "Chosen Axes" warband, who are Fyreslayers. My opponent had put together "The Farstriders", one of the Stormcast warbands. 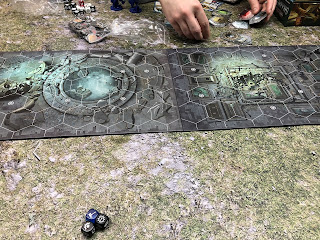 Before you even start the game, you need to set up the board. You play over two sections of board, and you roll off to have one player and then the other place a board section each, which can lead to a long, thin board like this one, a more traditional square, or even an off-set S shape like board. You then take it in turns to place objectives.

My opponent and I both quickly cottoned on that this stuff was Important. The roll meant my opponent placed his board second, so he created a long thin board to balance that his warband had lots of ranged shooting compared to my tough and stabby group. Similarly, the rules around objective placement meant you could do interesting and clever things to place objectives where they are useful to you or to prevent your opponent placing objectives where they would be useful to them. 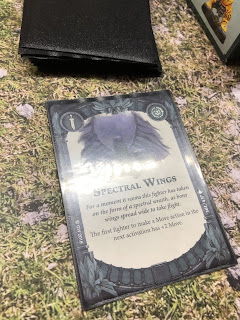 This is an example of one of the cards you can play. It added a bunch of move to one of my models so they could really rocket up the field. 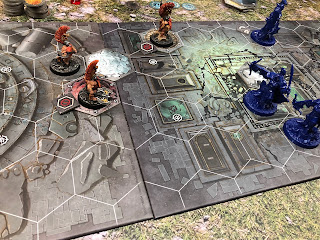 Here you see me pushing up the field to claim objectives and try and beat up some Stormcast. Meanwhile, they skulked away like the cowards with ranged weapons they were shooting me full of holes. 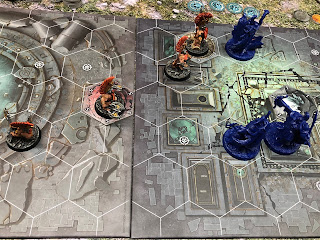 You'll notice a couple of my fighters standing on objectives. That's not because I was trying to score using them (you need a card for that) but ending a turn on an objective meant that my fighters "Inspired", which means you turn their fighter card over and get a cooler stat line.

Other warbands inspire by different means - so a Khorne warband might inspire due to people dying (no matter whose side they're on) while the Skaven warband inspires by successfully playing sneaky trick cards. The Fyreslayers, obsessed with finding treasure, get inspired by staying on objectives (presumably to give them time to search them for loot). 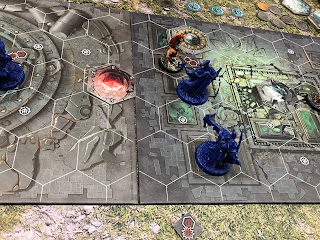 Unfortunately, I was out-manoeuvred and started to lose more of my brave Dwarfs. 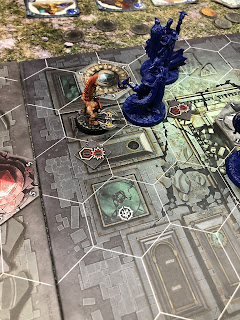 Slowly but surely, they were whittled down by the Stormcast, and I simply hadn't acquired enough Glory to win. 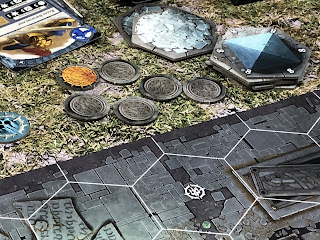 You get Glory for completing objectives. You can then spend it on cool upgrades. Whoever wins is the person who collected the most Glory overall. There's no benefit for having it unspent - you want to score early to get cool stuff. You can see the six glory the treacherous Stormcast amassed here - with five spent on upgrades and one left unspent. 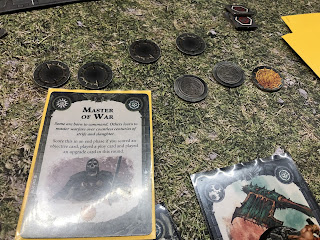 Meanwhile, I amassed a mere three (the other four tokens are activation counters, unrelated to the game score). You can see an example of an objective card here, with an upgrade below it to the right.

As I said before, this is a really cleverly designed game that's easy to pick up but hard to master. It needs a few tokens but they all come in the starter box, along with the special dice with weird symbols you can see in a couple of the photos that you need to play. I hope to get a few more bits and bobs painted soon so I can pick up a starter set and start getting some games in.
Posted by The Responsible One at 19:00