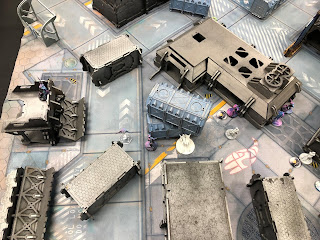 As I mentioned in last week's post, I attended an Infinity Tournament back in November at Dark Sphere. First up in the mission pack was Frontline, and I drew an ALEPH player whose ITS nick is jc.haynes.

I set up my Druze relatively aggressively, knowing I was going to need to cause some serious damage to the ALEPH forces if I was going to have any chance of getting a win. 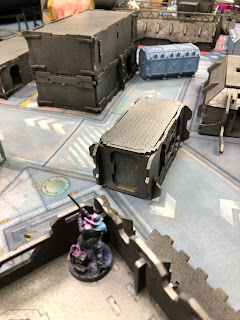 For the first time, I was taking Armand "Le Muet", an alien mercenary sniper with a plethora of weird rules. I was intending to mostly use him on the offensive, but as I was so worried about ALEPH storming the midfield I set him up to defend in the first turn and hoped he wouldn't get too shot up! 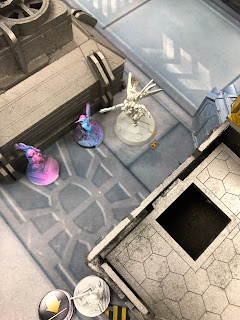 The attack started with a Garuda Tacbot dropping in to disrupt my lines. Unfortunately for it, my hacker successfully hacked the transport aircraft, it went off course and ended up dropping flat footed in front of my entire link team. It was shot to pieces as it landed, and I breathed a sigh of relief. 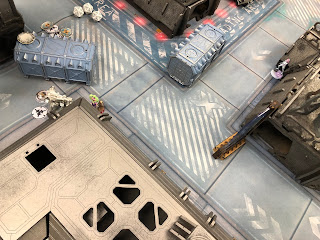 A brutal crossfire was set up by the ALEPH player as they got an Asura and a remote of some kind firmly set up in the middle of the field covering the fire lanes. 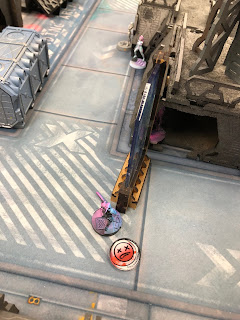 I managed to take the remote down with Armand, ten moved my HMG Druze up to take out the Asura. It did not work, and down he went. I then spent most of my turn moving up to get him back up. My Killer Hacker tried to take the Asura down (as it was also a Hacker) but it was my Hacker whose brain melted first. 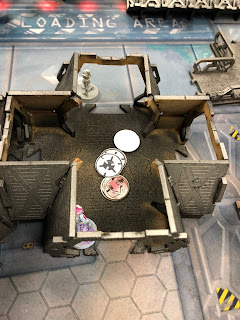 However, little by little, I managed to get wounds off the Asura, and, now injured, she pulled back to a safer spot. I managed to put a link team back together using the models I had left alive, and one of the combi rifle armed Druze managed to get a hit in and take her down, meaning I won the game 6-1. 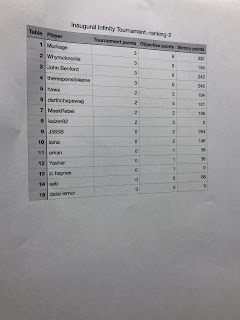 I was pretty pleased at this point, as it meant I was fourth in the rankings and doing well. My constant goal at the moment for one day tournaments is to win two out of my three games. 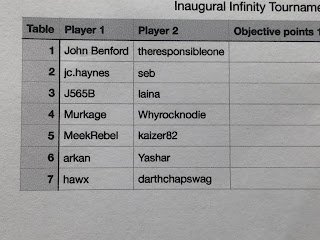 So, next up it turned out it was John Benford, Infinity celebrity and one of the hosts of the Totally Crit podcast. 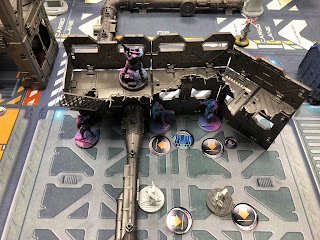 John was running Steel Phalanx, and was taking first turn so I deployed relatively conservatively with Knauf sticking his head out as a reaction piece. I was hoping his second wound and ODD would mean he could delay them a couple of orders before ducking back into cover. 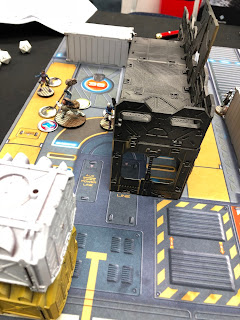 I decided to have my Bashi Bazouk come in on the side Ajax was, hoping he'd charge forward and I could start gleefully shooting him in the back. 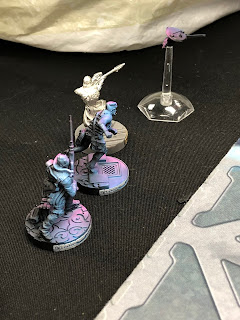 Sadly, my speed bumps were ineffective, and all three of my ARO pieces bit the dirt without really breaking the Steel Phalanx's stride... 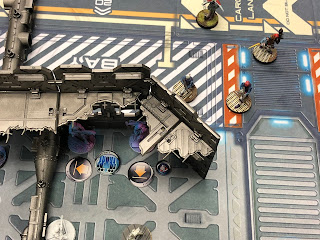 I spent a turn trying to recover from the damage, but didn't get very far. Next, Steel Phalanx came for my link team... 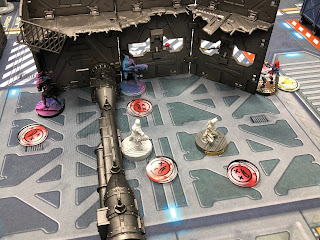 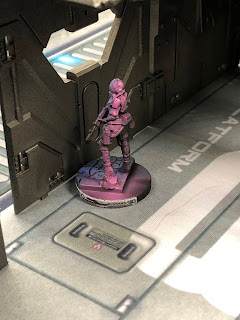 My Lieutenant took a shot at one of the link... 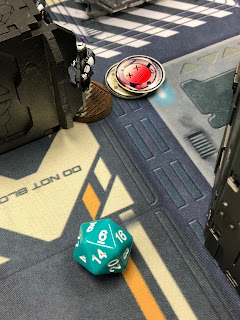 Well, at least a crit made up somewhat for the damage done to the link... But there just wasn't enough left to recover from the casualties taken. John was able to score a solid 7 - 0 on the scenario by not quite pushing me into retreat. So, onto my third game, and playing Yashar, also from HATE, who was bringing his much feared MRRF. This was a nice friendly game of Decapitation to finish up the day. 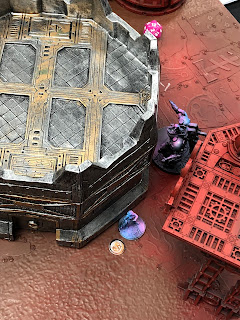 I decided to mix it up a bit and bring the list I'd not used yet with Scarface in. Partially, this was because the list was lead by Arslan, who's the toughest Lieutenant option available to the Druze, and I thought I might need the extra resilience. 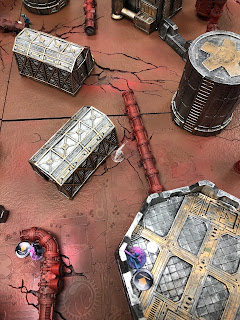 Arslan was deployed prone on a roof top, while Saito Togan snuck into the midfield in Hidden Deployment. 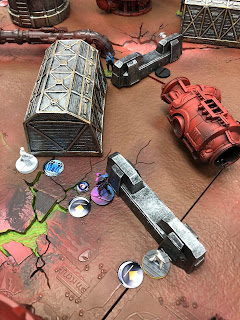 The open table meant I was mostly pinned down by a Zouave sniper and a Loup Garou link. 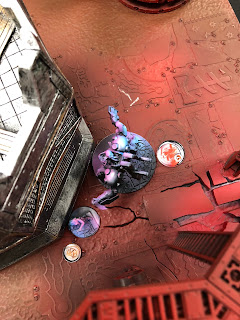 Scarface took an early wound that Cordelia was able to fix up. 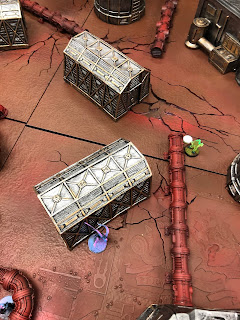 Saito was able to run around and do a little bit of damage. 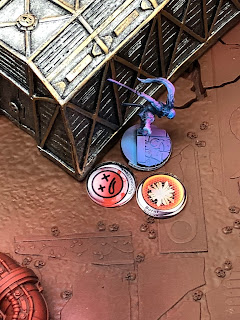 But then he was hit by a Heavy Rocket Launcher, and all was woe. 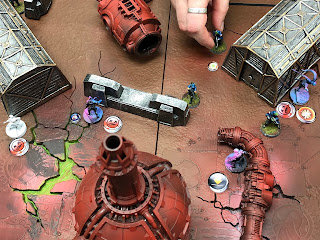 Chasseurs started clearing up the middle of the field with clever antipersonnel mine placement mixed with surprise shots. 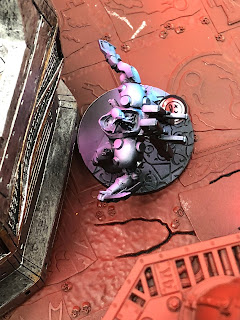 Scarface did a little more damage before being taken down, this time, with Cordelia in the blast radius. 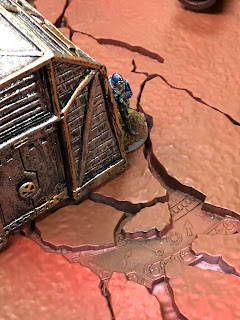 I think this is the model who managed to take out Scarface. 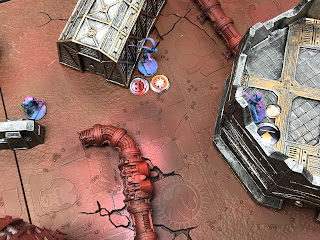 A model had made a break for when Arslan was hiding out, and my Brawler broke cover to shoot them in the back and put paid to whatever Yashar was planning. 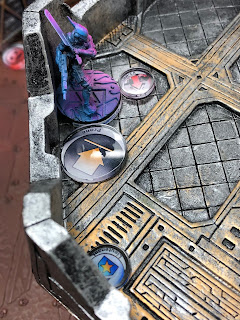 The game ended with Arslan being the only model left standing, on No Wound Incapacitation, which stopped Yashar from getting a clean sweep on the points. I'd only managed to kill the Designated Target, leaving it a 7-2 win to Yashar.

All in all, it was a fun tournament and I definitely feel I'm learning a lot about the Druze. I'm doing a lot of Satellite tournaments this year, so hopefully I'll pick it up quickly!
Posted by The Responsible One at 19:00