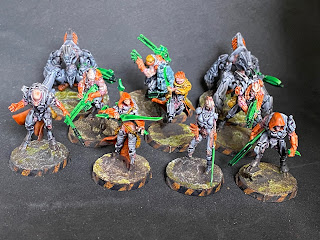 I'm pleased to say that I managed to get all ten models I committed to for the Corvus Belli "Organised Play at Home" painting competition finished in time for the deadline. It was a bit rough at times, but we made it! 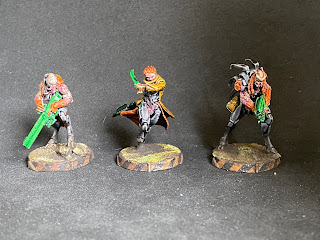 Here's some extra photos of the more recently finished ones. I'm sure I'm going to spot all sorts of bits I missed as I go over the photos that I'll invariably need to go back in and touch up. But in theory, they're ready for varnishing!
The model on the left here is the Mentor with Shock Marksman Rifle. I already had the model with Boarding Shotgun painted up, but got some advice that sometimes the extra range of the Marksman Rifle was worthwhile in later turns. I've definitely had that come in handy from time to time.
In the centre with have Sheskiin. Her background is that she was a Cadmus trooper, whose specialist ability is to scan the physical abilities of nearby enemies and copy it - and she was able to do that to the Aleph recreation of Achilles. She was ridiculously good in third edition, but has toned down a bit in N4, while still remaining an absolute beast of a model.
On the right, another stalwart of the attack pieces, a Caliban with Spitfire. Basically a forward deploying attack piece with a squad support weapon, he can be an absolute terror, although I've not used him enough yet to really get him dialled in. 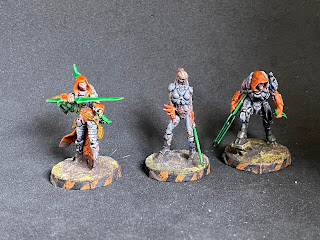 The second batch include a couple of older models, whose level of detail is variable, while still having some rather fiddly to paint areas.
On the left and the right are the old and new "Spec Ops" models, respectively. Used mostly in campaigns, they're also widely accepted as proxies for other models as needed. In this case, as both have hoods similar to the released Shrouded model, and you often want two or three, I'm expecting they'll both most regularly see service as another mid field specialist . . .
In the centre is the old Speculo Killer model. Weirdly, I've already spent some time today talking about how she plays in a Facebook group as a returning player found her Impersonation skill A Bit Much. With the ability to deploy as a marker anywhere on the board, sometimes even in your opponent's deployment zone, she's a really deadly assassin piece who can absolutely wreck an unprepared opponent. Broadly, though, I find she's more commonly a disruption piece, forcing my opponents to try and dig her out before she has an opportunity to cause mischief.
With another ten models painted, I'm spending a bit of time reorganising the hobby room before launching into the next project. I haven't timed it well given the current UK heatwave, but I'll get it done. Eventually.
Posted by The Responsible One at 19:34