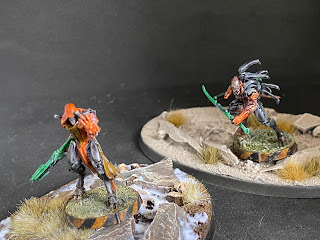 Proving once more I have a Bad Squiddo habit, Annie recently announced she was starting to stock Gamer's Grass Battle Ready Bases, and I bought some. I'd been planning to for ages as an experiment in getting "ready out of the box" Infinity Special Terrain areas.
I went for the Oval bases in 170mm, 120mm and 105mm, using the Winter and Arid themes. I felt that these were the best options to very clearly represent "Mountain" and "Desert" terrain respectively. There are five terrain types in Infinity overall. I don't think that Battle Ready have good options right now for "Aquatic", "Jungle" or "Zero-G".
Shown above are the two 105mm bases. These are, I think, the smallest I'd go for scenery pieces. They wouldn't have much of an impact on the game if used in isolation due to their small size, but careful placing around other pieces of terrain could get you some really interesting tactical challenges. 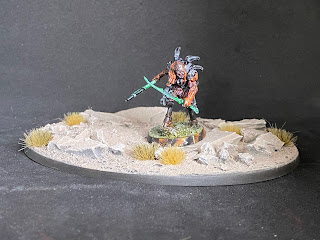 This is the Arid 120mm. Size wise, I think this is the sweet spot in terms of interaction with the table and price. While not much bigger than the 105mm in theory, the extra space really feels like it makes the difference for only a small difference in price. 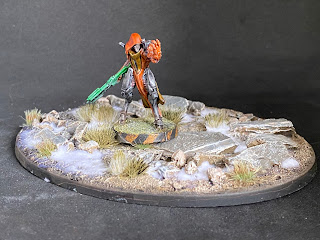 Infinity "special terrain" has three impacts on the game: Difficult Terrain, Visibility Modifiers, and Saturation Zones. For me, these bases are intended primarily to count as Difficult Terrain. I don't think that they instinctively look like they'd make it hard to see things through them, or catch some of the shooting going through them, which would mean that a player might have trouble remembering that in play.
I want any scenery I put on a table to immediately make sense to a player (and preferably, have them able to guess without you telling them). This is why I went with the "Winter" bases over "Highland", because while both, out of the options available, say "Mountain", the snow makes it far easier to guess. Easier to guess means easier to remember. 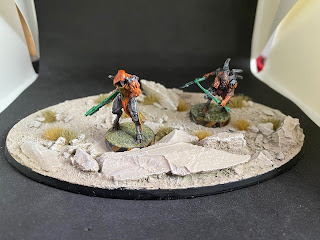 Then we get to the 170mm bases. These are amazing. They're really big. Too big, as you can see, for shots in my photo box shoot without going outside the backing material. They're big enough that they'll be a difficult choice to move around or go through if you don't have the appropriate Terrain skill.
That said, the step up in cost is significant. I'd not recommend them to a gamer on a budget - you get more coverage, in practice, from two 120mm bases for a comparable price. But if you can afford, then they give you a really big chunk of area to be Difficult Ground.
I'd also take a moment to nod to the 100mm Round base as an option for terrain too. I am personally not a  fan - while using bases at all is a bit of a compromise in terms of realistic looking scenery, I feel like a circle is more likely to "stand out" to the eye than an oval. That said, it has nice table coverage for the price, and if you're looking for variety, it could work quite well mixed in with ovals to give more variety to the space. 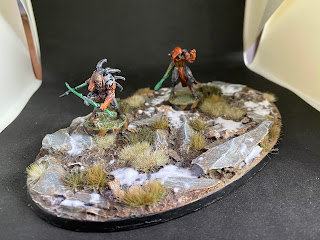 Now, obviously I haven't had a chance to use them in anger yet. That means that the current review is missing two key things. I can't tell you how they've worked in actual games. And I can't tell you how sturdy they are with regular use and transport. I think I'm going to be putting them individually in bubble wrap pockets for transport, as they look pretty tough, but I'm worried about chipping and smaller rocks getting knocked off.
I tried putting a few figures on, as you can see from their photo shoot. There are a few places that models won't rest nearly on because there is texture, but I'm happy with that compromise for the sake of looking pretty. Infinity already has a rule that you can't finish your move anywhere your base doesn't fit, so if it doesn't stay where you put it, you can't finish your move there. I did use plastic bases for this test, so a solid resin base with a completely flat bottom might have more problems.
With those warnings in mind, I would definitely recommend these to anyone who is willing to spend a little bit more money for something that's table ready. If you've got more time and less money, you'll be able to put something together yourself quite easily. I don't think either approach is wrong - they're based on your own personal circumstances, and you'll need to make a decision based on your own balance between available funds and free time.
Posted by The Responsible One at 19:00