Forty Percent there isn't quite as catchy 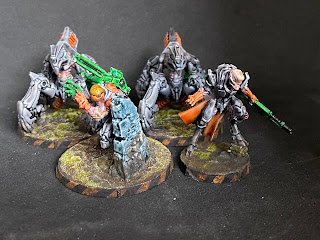 With the Corvus Belli Organised Play at Home painting competition deadline bearing down on me, I've been focussing in on getting my entry finished The good news is, I've got four of the ten models totally finished with three days to go! 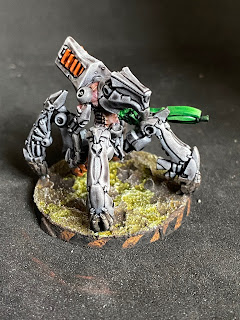 So, as a bit of a preview, here's what's finished so far. First off is the M-Drone. This is the utility remote for the Combined Army, getting the usual suit of Sensor and Forward Observer that all the similar models in other armies get. Meanwhile, the Combined Army's Total Reaction remote, the Q-Drone, is a little infamous for gaining Mimetism -3, and a second profile with an option for a Plasma Rifle. This is an excellent piece and I've been using it extensively online. In fact, I think I need another one . . . 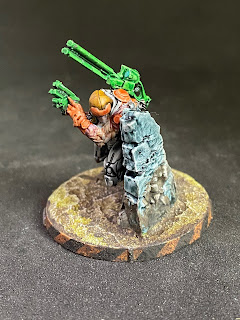 Less commonly used, we have the Haiduk. Which is a shame, because it's a lovely model. With a combination of a Multi-Spectral Visor Lvl 2 and the ability to dig foxholes, it's a fascinating profile I want to play around with a bit more to get used to how it works. 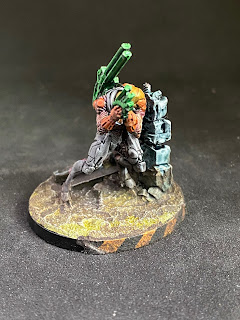 I love how the model is crouching behind a ruined bit of wall. It was great fun to paint. 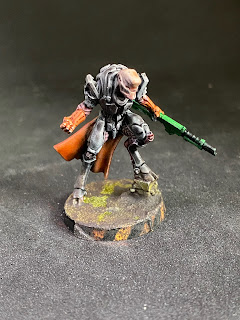 Meanwhile, in the category "definitely good but I don't know how to use yet" is the Malignos with Boarding Shotgun. With Hidden Deployment meaning I can just write down where it's hiding until I want to move it, rather than deploying the figure, it's got a lot of potential for the deception games that Shasvastii do so well at.
He's just quite a few points and I've not found the space for him in many lists yet. I should fix that.
Anyhow, I'm writing this post on Sunday evening, scheduled for Monday evening. The other six models for the competition are all done, less their bases, and I'll be blitzing through what's left to do on those on Monday night so I complete the competition goal with a day to spare.
Wish me luck!
Posted by The Responsible One at 19:00