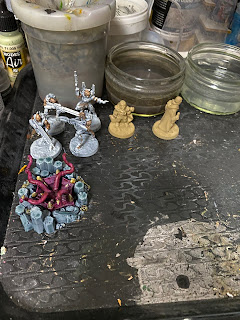 At the start of the month, I wrote that I should pick one job and finish it, rather than jumping around from one to the next and half finishing it. I have spectacularly failed to do that. I haven't got halfway through the Shasvastii I was planning to do by the end of June, but did get a nice assortment of gaming quality D&D models ploughed through. 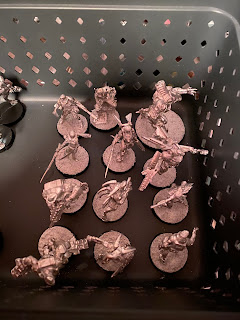 I've now got an Infinity tournament in August, so the priority has moved from "painting up old Combined stuff that needs doing" to "get things I'm likely to use in a list painted". All the platinum pledge Combined Army from Defiance are getting to the point of paint ready over the long weekend the UK is having to celebrate our Queen having survived for ages. I'll be starting with things that are likely to see a bunch of list play, then as I firm up the lists I want to take, focusing in on anything I don't have painted. As we get towards the middle of July, I'll start on any specific things that I'm taking in my lists. 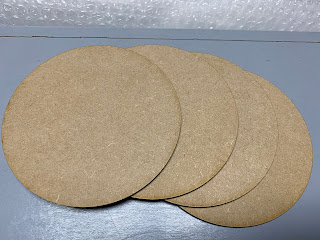 Also for the tournament, I've picked up some MDF circles of the right size for "blizzard templates" for a specific mission at the tournament. The plan is to MDF seal them, undercoat them, then use basing mixes and snow to make them look all winter-y. 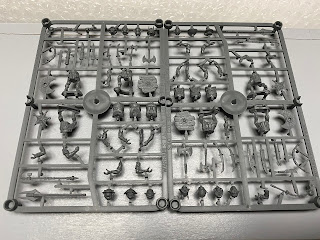 A lot of the slowing down of painting has come from me selling a whole ton of stuff on eBay. When we moved all the boxes of stuff, we have to get our new fibre installed, it was clear we both had a ton of abandoned projects and stuff we're never going to get to.
While I've decided I'm not going to do a whole mercenary contingent of Half Orcs for Warhammer Fantasy Battle 3rd edition out of the Warlord Games orcs that used to be made by Wargames Factory, I decided I did have use for a couple of sprues for them as generic orcs for fantasy skirmish and D&D. I've started work on assembling them straight away so they don't just go back into a stash for years. You may also have noticed a degree of hype around Games Workshop releasing a new edition of the Horus Heresy game, complete with a whole ton of new plastic. While it is super tempting to take the money from the clear out and quickly make the whole problem worse again, I decided instead to dig out these two Praetors a friend gifted me a while ago for a now cancelled project, and paint them up for Heresy. If the game is still appealing after that, I have time, and I like the look of the rules, then maybe I'll expand out from there a bit! 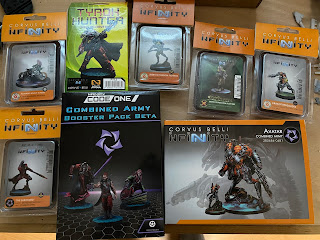 One of the missions at the August Infinity tournament has a free Motorised Bounty Hunter, so I've dug mine out to get assembled. I'm just waiting for the foot version to arrive to cover the Bounty Hunter when they dismount, then I'll be sending this lot off. It's the start of me prepping to run the Vanilla Combined Army in the future, although given how many Shasvastii I have to paint, it's still some way off!
Posted by The Responsible One at 19:00