The long weekend - mini prep and a sorcerer 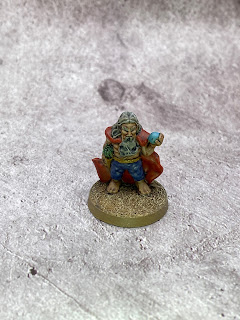 This weekend, I've been away at Empire, but in the UK, last weekend was a four day weekend to celebration our Queen ruling for a whole bunch of time. That means lots of painting, right? Not really. This Encounter Terrain dwarf sorcerer was all that got finished, despite some high aspirations. 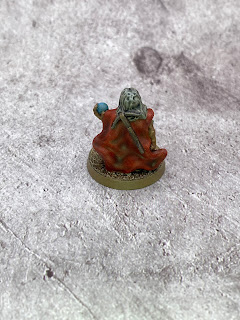 (You may be wondering why he's got a bunch of quarrels at his hip - he's got a crossbow on his back! It turns out that low level sorcerers often end up carrying a crossbow for some reason...) 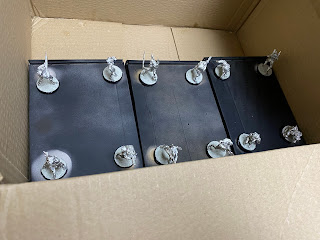 That said, it wasn't a slack weekend for hobby! With the good weather, and a huge backlog of assembled models back from my commission assembler, it was time to get a chunk of them done, as there's several stages, each of which have a long drying time.
First up, I add basing paste. Then, it's a black undercoat, which once dry, I go over with a brush and catch any bits I've missed, as fixing it later is an absolute pain. Then it's outside again for another zenithal spray. With four separate drying periods, a long weekend is absolutely perfect! I got one batch done all the way, and another batch halfway. 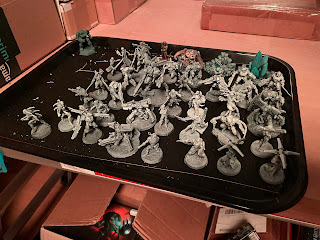 That is leaving a whole ton of Combined Army models assembled and ready for paint. These earlier steps have ended up happening faster than the last steps of painting and varnishing! Still, they're ready for me to grab and paint if I need something for August's tournament!
I also coated both sides of those MDF circles I got in MDF sealant and undercoated them, ready to add basing paste and snow - another bunch of jobs with a whole ton of intermediary drying times well suited to a long weekend.
Posted by The Responsible One at 19:00

Email ThisBlogThis!Share to TwitterShare to FacebookShare to Pinterest
Labels: Combined Army, D&D, Painting, Shasvastii, to do