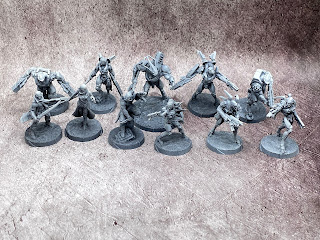 I'd realised that I'd fallen a bit behind with getting assembled models ready to paint, so spent a bunch of time getting the Combined Army from Defiance ready to paint. I got half done, and the other half based and sprayed black to finish up later. 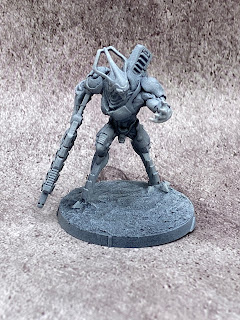 First up is the big bad for Defiance, the Charontid. You can't take one in the Shasvastii, but in Combined Army he's tough Heavy Infantry option with some nice weapon and equipment options. He'll be one of my early "big hitter" options when I move from Shasvastii to vanilla Combined. 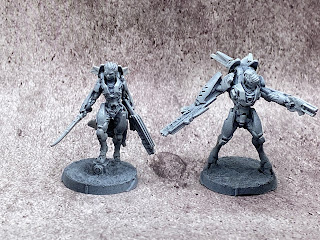 Two more heavy hitters that I'm not so sure on - Boarding Action Sheskiin and the Gwailo - who I think has an AP Spitfire rather than a Heavy Machine Gun. Boarding Action Sheskiin gets a bit more armour, but becomes hackable - and the "normal" Sheskiin already starts with two wounds. I'm not sure whether the extra armour is worth her becoming vulnerable to hacking.
Meanwhile, the Gwailo AP Spitfire is better at dealing with armoured targets than the Heavy Machine Gun at a shorter range. With the lack of longer ranged guns in Shasvastii, and plenty of other solutions to armour, it seems a bit more niche than the Heavy Machine Gun. 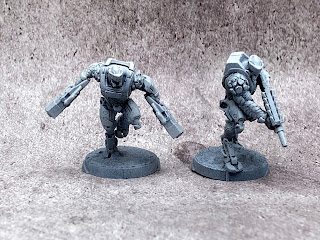 The pair of Jayth Cutthroats round out the Jayth profiles, providing a Chain Rifle and Red Fury weapon load out, both of which I'm keen to try out. The Chain Rifle profile also comes with E/M Mines which helps with area control. The Red Fury profile is also the main attack gun they use, so will be central to trying to make their Haris Fireteam work. 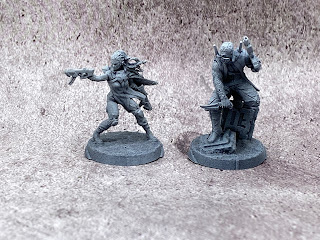 The other two named characters in the pack other than Sheskiin are Aida Swanson and Victor Messer. I've already painted a different version of Victor and have found him a useful Hacker toolbox. Meanwhile, Aida recently received an upgrade in the recent Fireteam rules, allowing her to join Shasvastii fireteams, and counts a Nox for composition bonuses. I'm definitely curious as to how the Nox will play with her in particular. 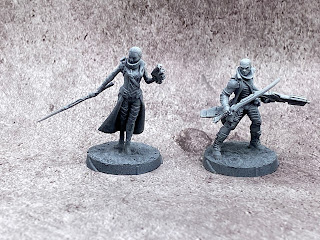 The two Speculo Killers are particularly appreciated. I've been using the old sculpt, and I'm not a fan of the current retail Speculo Killer so these this gives me the models I need with the new quality of sculpts. 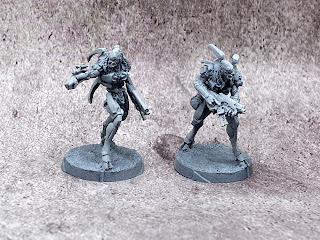 Finally, there's two Caliban armed with submachine guns. The two Caliban SMG profiles are the Engineer and the Chain of Command model. Both of those profiles are ones I use a lot, so I'm super happy to get these two ready for paint because I'm expecting to get a bunch of use out of them.
All in all, there's plenty of models I'll get a bunch of use out of, and getting them to this stage gets me excited to get them on the table. Hitting this milestone of assembly is excellent for my keen.
Posted by The Responsible One at 19:00