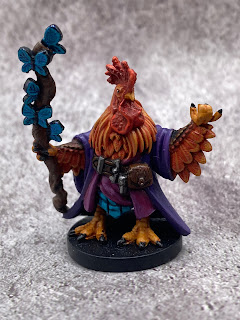 While doing some tidying up, I decided to send a few models I had out to be commission painted rather than put them away. It resulted in quite an eclectic selection being sent to Blood Medusa Paints. They're now back, which means you get to see them!
First up is a Gallus Druid from the Humblewood setting. I got the box he came with for the Strig Knight, who I adore, and wasn't sure what to do with him. He's now painted, and I still have no idea what to do with him... 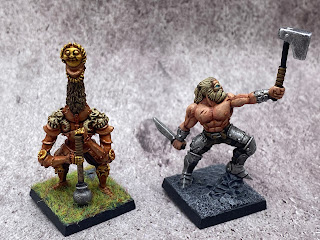 The square bases here hint that I assembled these a while ago - I usually base on rounds these days. These models were from the "Circle of Chaos" Kickstarter - described as "The Guardian" and "Brok the Barbarian". These will be useful as characters or weird monsters in D&D. 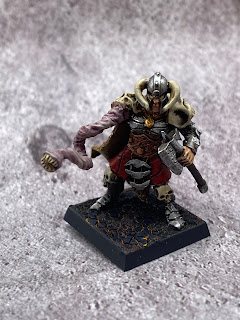 Next up is Adira, the Dark Champion. This villainous heavily armoured lady is made by Bad Squiddo. I assembled her ages back with the tentacle arm, and while looking quite "Warhammer"-ish, I think will suit quite well as some sort of Eberron servant of the Daelkyr, or some other D&D follower of creatures from the far planes... 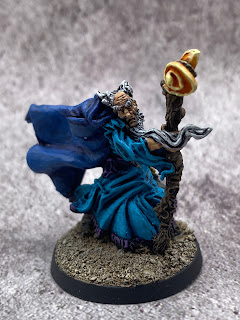 I picked up this Otherworld Miniatures Elementalist in a sale, without a clear plan to use him. He's an excellent generic wizard model, and would suit a misguided villain or character ally in D&D or other roleplaying game. He might also see some service in Frostgrave depending on my mood! 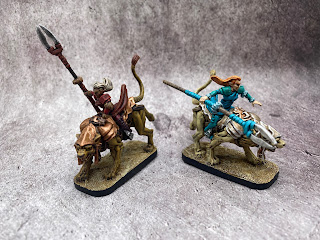 Finally, I sent off these two elf cavalry for painting as well. They come from the now defunct Runewars wargame, but I picked them up to use as NPCs or monsters in D&D games. They're pretty good models and going cheap in quite a few places, so worth picking up if you see them!
Posted by The Responsible One at 19:00