The week after Salute . . . and future plans 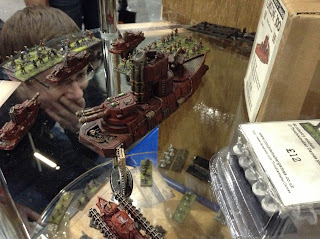 So, how has my week gone? I've made a few posts about Salute, with the pics of the Forge World display unsurprisingly doing well, but with a surprising amount of interest in my post about Troublemaker Games. I'm guessing this is because I got a shout on the Tactical Command forum. God knows what will happen if I actually start playing Timeline 300 rather than just the wife.


On Wednesday I pottered down to Dark Sphere and saw that things have been getting busier on 40K nights since I was last there. ClauseIV1918 has been expanding his Grey Knights, and his blog is mentioning he's also branching out with some Imperial Guard allies.


I got in a game against the Ravenwing on a cityscape board, and got comprehensively beaten - although it wasn't, on reflection, the massacre I first thought it to be.

Which leads on to my upcoming posts! I still have one more Salute 2013 post to do, which will be a general summary of how the event went for me. I should write up a battle report about what happens when Sammael and Mephiston decide to hang out together and shoot some Guardsmen. I've also been tinkering about with Sarissa kits to add some extra detail to them.


Finally, I've booked in for some events. I will be at Grumpy Old Wargamers Con in June, and Enter the Citadel at Warhammer World in July. They will likely, in turn, lead to some more blog posts of their own...

I'm going to shelve the aborted attempt to paint the Salute Mayan for now, try and finish off the Scribe and Vindicare, and really knuckle down on the Tzeentch Herald, Malifaux Collodi Crew and Sarissa Buildings, with any spare time going into getting a little more progress with my currently stalled Imperial Guard.
Posted by The Responsible One at 23:51