Getting Someone Else To Do Your Painting: Squidzilla Ink

After a couple of small "too good to miss" deals turned the "to do" column of my Kanban board to the red of shame, I decided that some of my hobby budget should go towards getting more models painted, instead of making the backlog even worse. This was made doubly important because I knew that the Eavy Metal painting classes I was about to go to would also give me a bunch more half painted miniatures.

Yes, I had decided to dip my toe into the world of paying someone else to paint some of my models - commission painting. It is worth noting that for the sake of marital harmony, I had talked to my wife about this first - given that she is also a commission painter and had not been in favour of such things in the past. However, given her current backlog, she agreed it was fine for me to commission some work outwards. 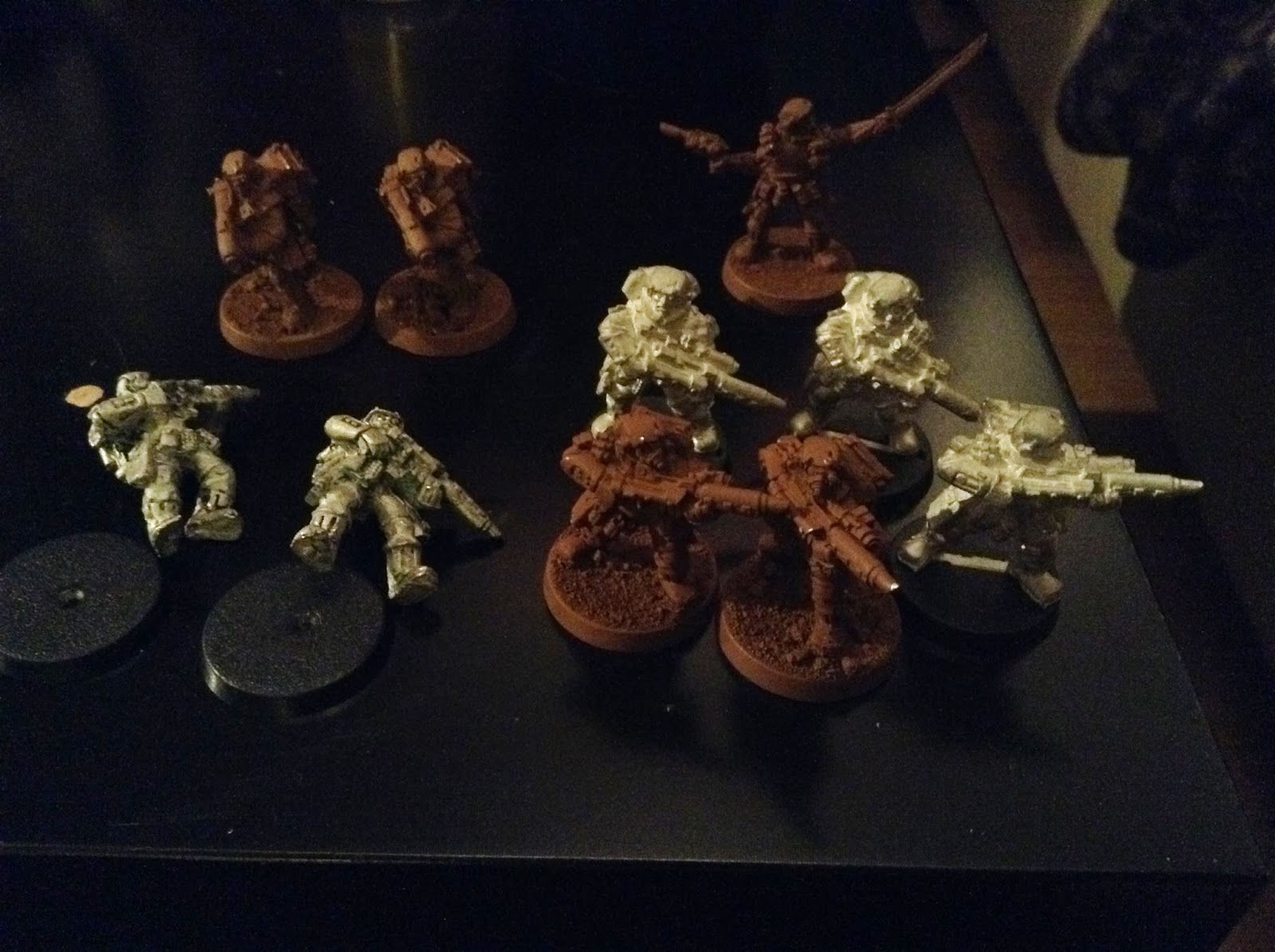 For the purposes of this experiment, I selected my second Storm Trooper squad. They were ideal for a number of reasons. They had a little bit of awkward base pinning to do that I really wasn't looking forward to. Half had been undercoated by a seller and half were not. Half had been bought from Lesley's Bits Box at Salute 2012, the other half from a variety of low ball bids on ebay.

In addition, as an elite unit, I'd planned on painting them up a bit differently from the Storm Trooper unit I already had painted, and it didn't matter if they looked a little different from the other units I have. In short, they were an excellent unit to try out a new painter on.

The willing guinea pig I selected for this experiment is the chap who runs Squidzilla Ink. He was new to the area, and I met him through Dark Sphere and playing Infinity (I still have a battle report with him to post up at some point). His website is still a work in progress as he's just getting set up, but having seen a few example models both on his site and in person, I decided I was comfortable with handing him some of my models. (He also has an ebay store which will sometimes have models passing through it - worth having a look every now and again!)

It was certainly an odd feeling to be handing someone models and money, rather than handing people models and receiving money! His prices were reasonable, but I will do the very British thing and not go into the detail of how much I paid. Like many painters, he ran to a system of paying a deposit up front, with the remainder being paid on completion of the work. 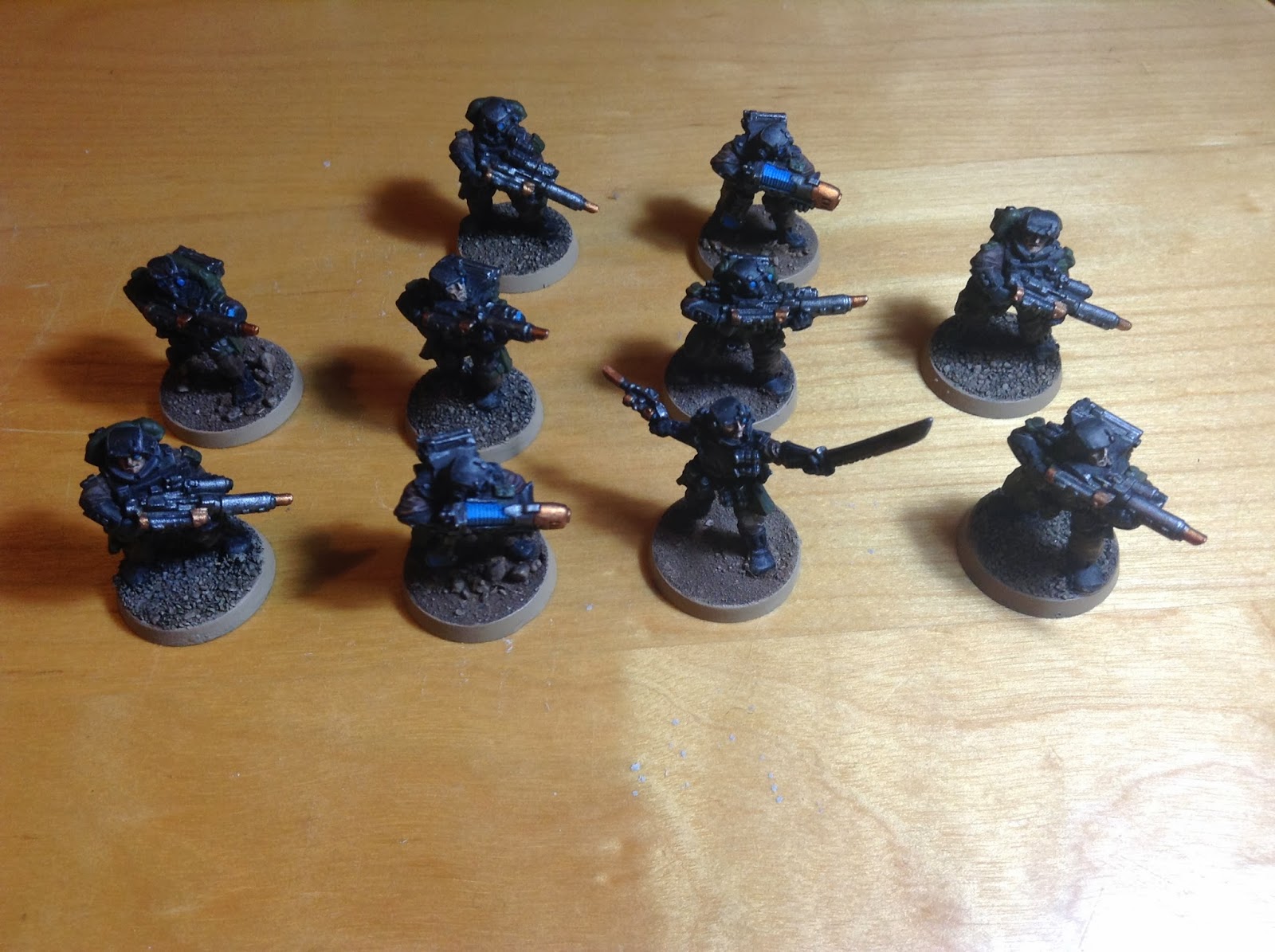 I gave him the models on a Friday evening, and picked them up the following Tuesday at Infinity night. This was because there was a gap in his schedule, but if you need models painted in a hurry, its entirely possible he'll be able to oblige! I have, sadly, been a little incompetent in my photo taking, and I really need to take the time to take a better photo of them. You may think that they are a little dark, but this was part of my brief, as my Guard army uses a pretty dark set of colours, and I wanted them to fit in.

All in all, I am very happy with both the results of the work, and the service provided. The proprietor of Squidzilla Ink is a craftsman and a gentleman, and I would most definitely recommend his services to others. I am already looking thoughtfully at my backlog trying to work out what else I'd like to get on the table quickly...
Posted by The Responsible One at 23:22