Painting Review of the Year

So, I took a little time to look at what I've managed to achieve this year from a modelling and painting perspective.

That's it. Seriously, that is all I've managed to finish painting in a year. It gets worse, because the Sentinels need a touch up, and have done since their first game.

I have managed a few other bits and bobs, though:

A year. That's a year's progress, basically. I'm not showing pictures of the 15 models I'd painted last year and threw a quick bit of basing sand on this year. That would be too desperate. 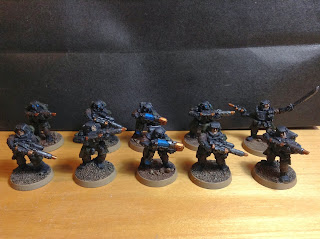 However, an honourable mention does go to Squidzilla Ink, who completed more of my models in a week than I had managed to do in an entire year.

I do, however, end the year more or less where I finished, despite the massive purchases and minimal painting progress. This is because I've been ebaying off my massive cancelled Skaven army project, and not buying a whole army at once to replace it. This did somewhat disguise on my tracking systems how little was actually getting painted.

So, what are my plans for next year?


So, really, given how much I have to paint, I can really step back on things on my "to buy" list. As far as new models goes, I can really only see me getting:
Beyond that, I think I just need to finish off the current round of ebaying things, buy more books (and ebooks, to save space) and try and keep spending down a little more this year. I do need to work out what I am going to do for Salute this year, as I do want to get something, but it needs to be more manageable this year - anything I get in the first half of the year needs to be painted in the second half. This year is about, hopefully, getting in control of spending and hoarding habits, and trying to buy less than I'm painting.

Posted by The Responsible One at 16:18