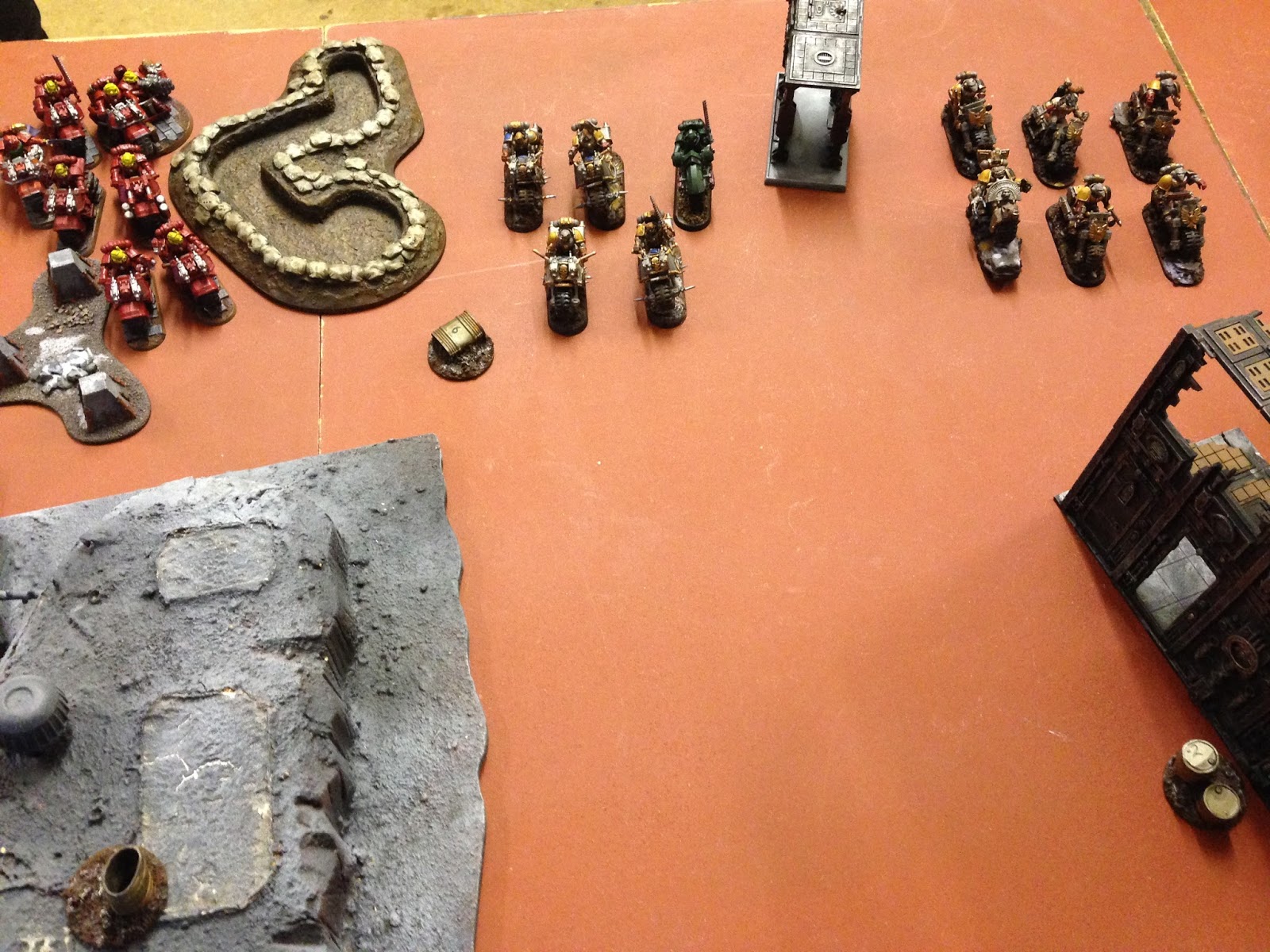 For the first battle of the Christmas party, we had to make "Squigfall" - landing our forces on the giant squig and winning objectives from a custom deck the Overlords had prepared for the event. To keep my life "interesting" I decided not to read any of the cards until I drew them.

I was a bit nervous about the first game - I didn't have much in the way of AP3 weapons, and only the Hellhound could ignore cover, and we were up against two bike army lists - one using a Gorgon Chain. 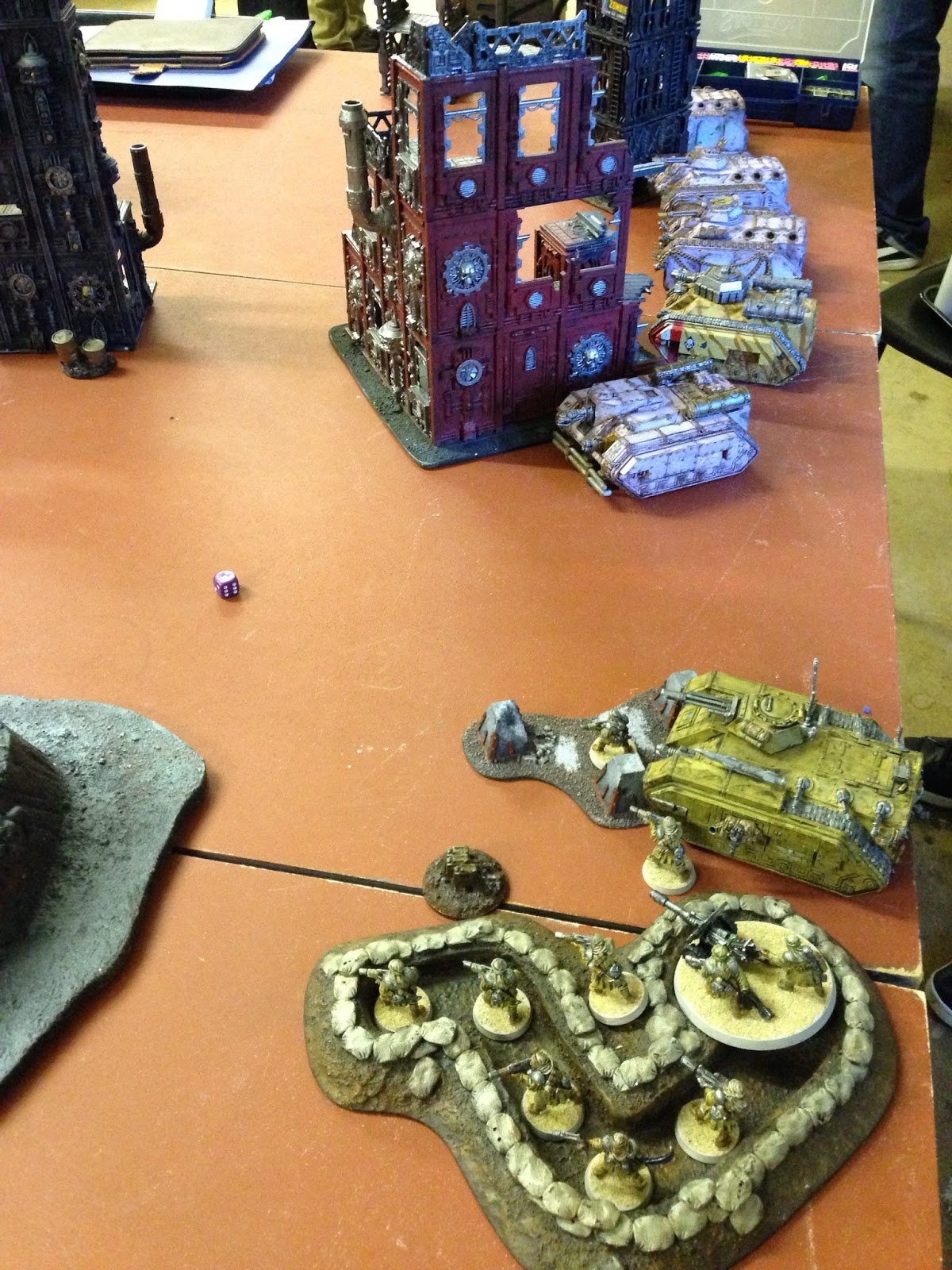 My somewhat ropey allies were a bunch of renegades and cultists using the Lost and the Damned army list. Their BS2 means they're much cheaper, so there were a few more troops on the table, filling me with reassurance. 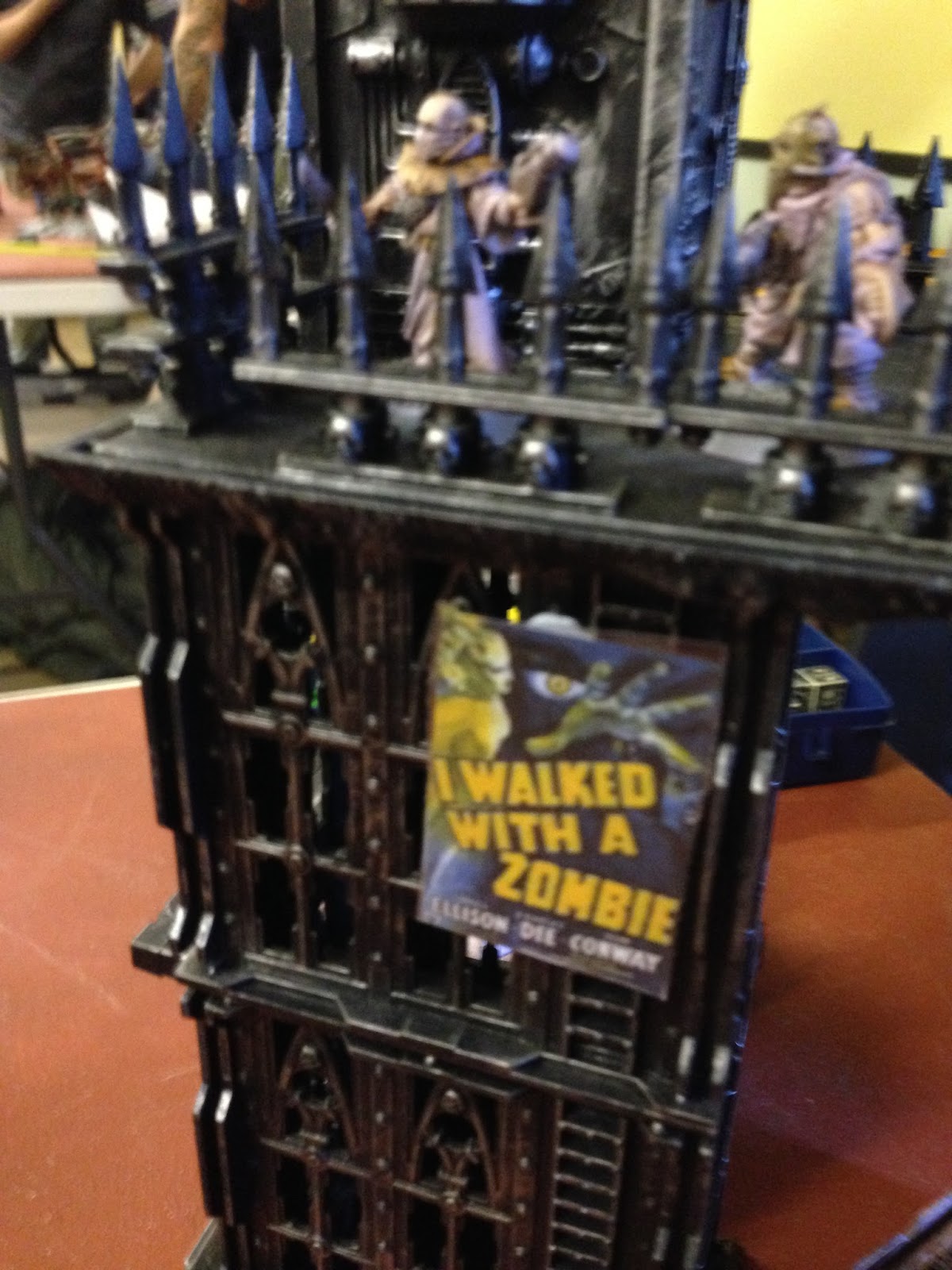 I was impressed by both the terrain quality the Renegades. I didn't get much of a chance to take a close look at the bikes we were facing, though, which is a shame! 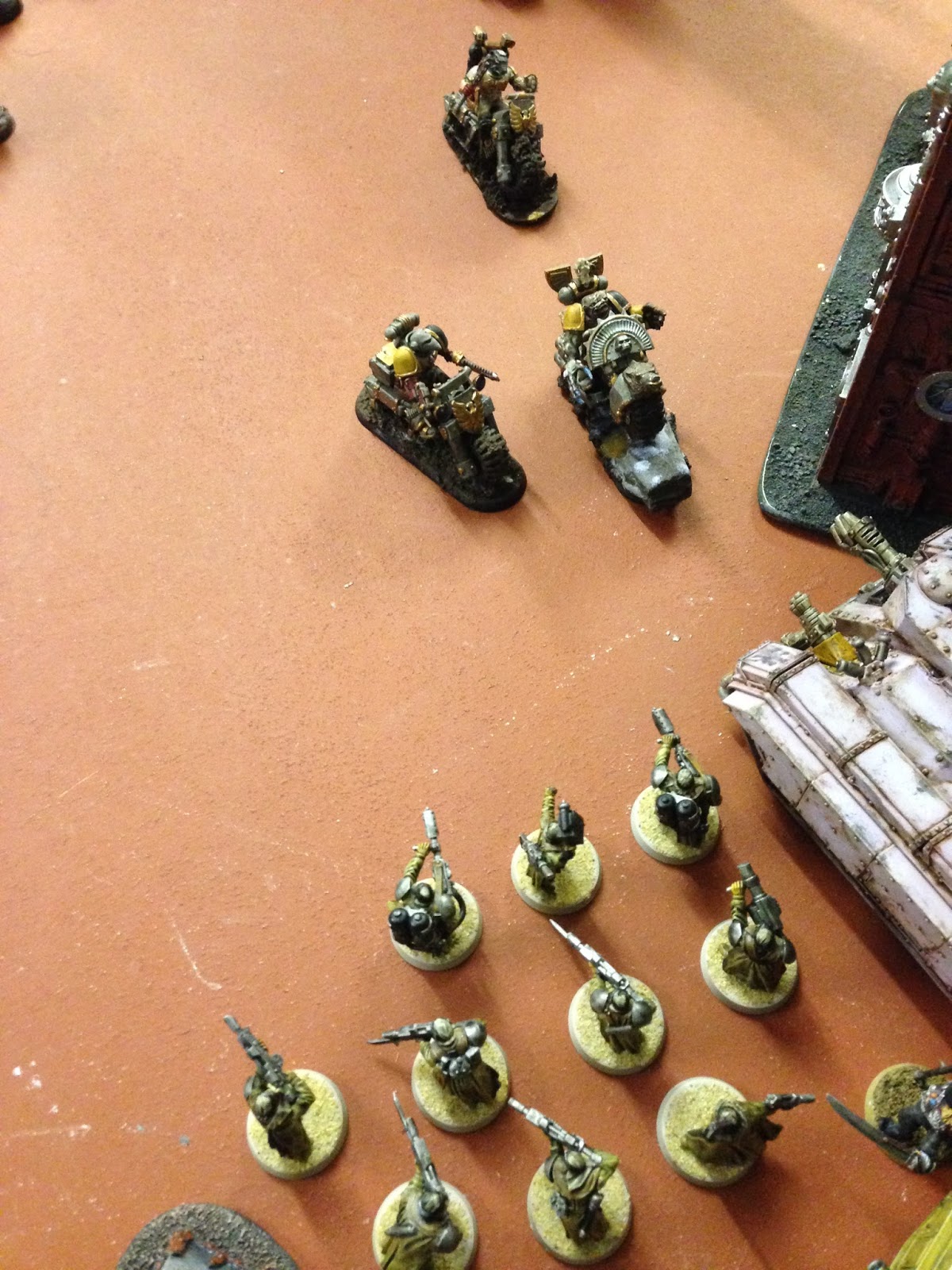 We spent our first turn trying to blast the bike command squad to bits, but with the apothecary, Gorgon Chain and other equipment, it proved really hard. In the end, getting units around the flank and shooting the other guys really helped. The Apothecary had a couple of "Look Out, Sir" rolls, but refused to roll over. 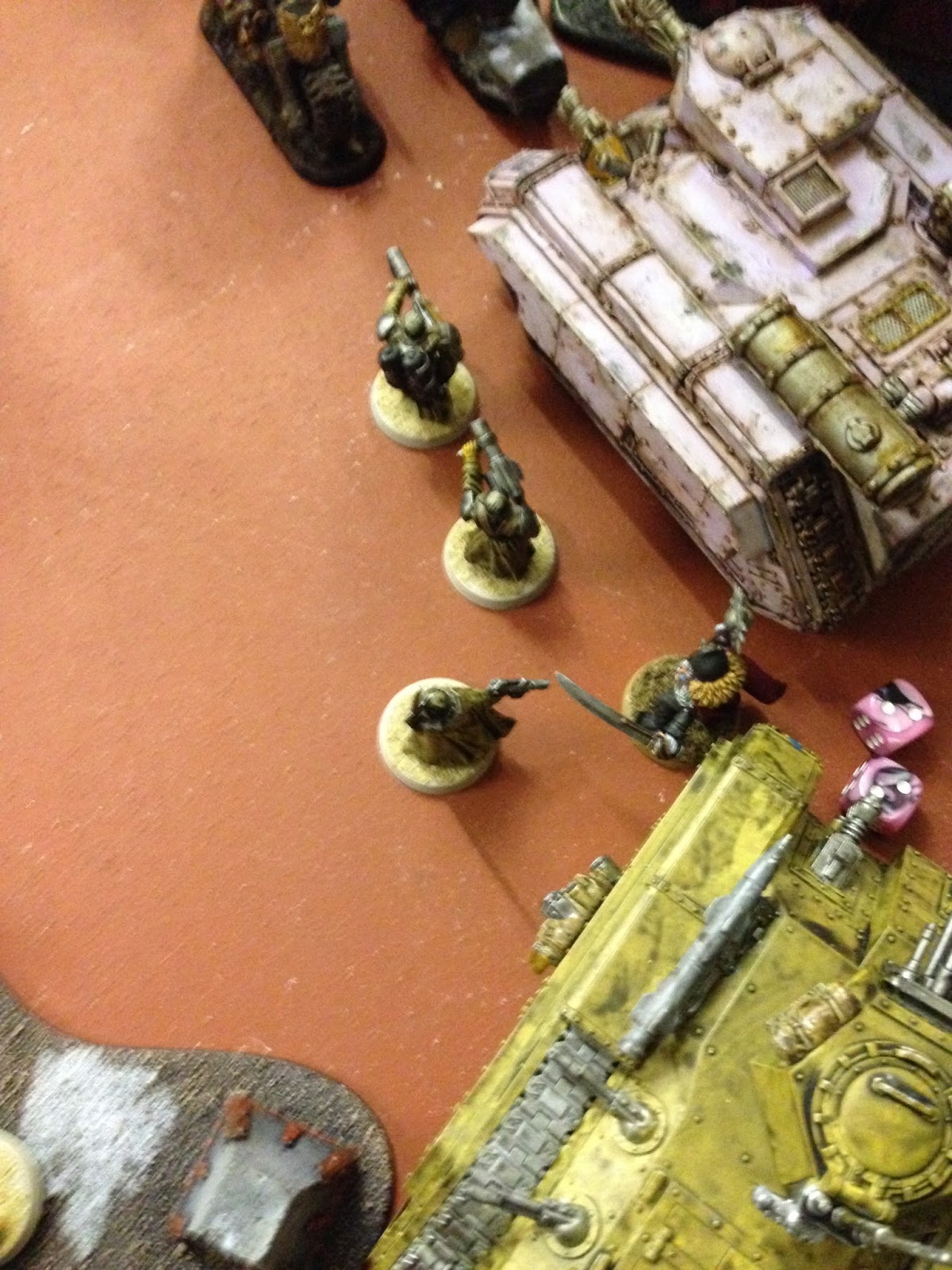 With the Captain having shrugged off the demo charge, the return fire blew most of my demolition veterans to pieces. It wasn't looking good! 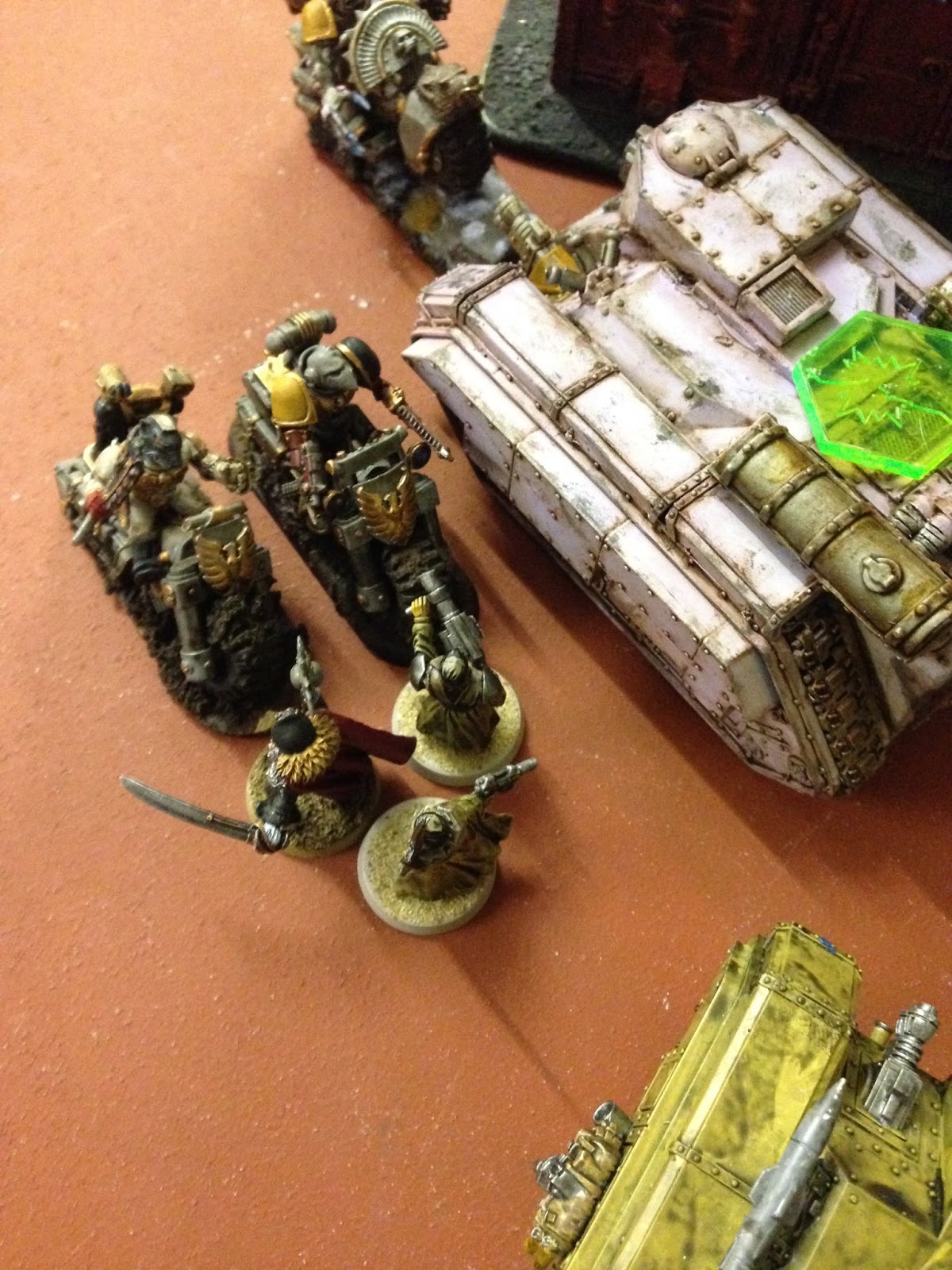 The meagre survivors were charged by the bikes, and it wasn't looking good for our heroes! The Commissar Lord issued a challenge to the Apothecary, as the Captain was off punching a tank to pieces, but sadly, the high toughness and Feel No Pain kept him up. 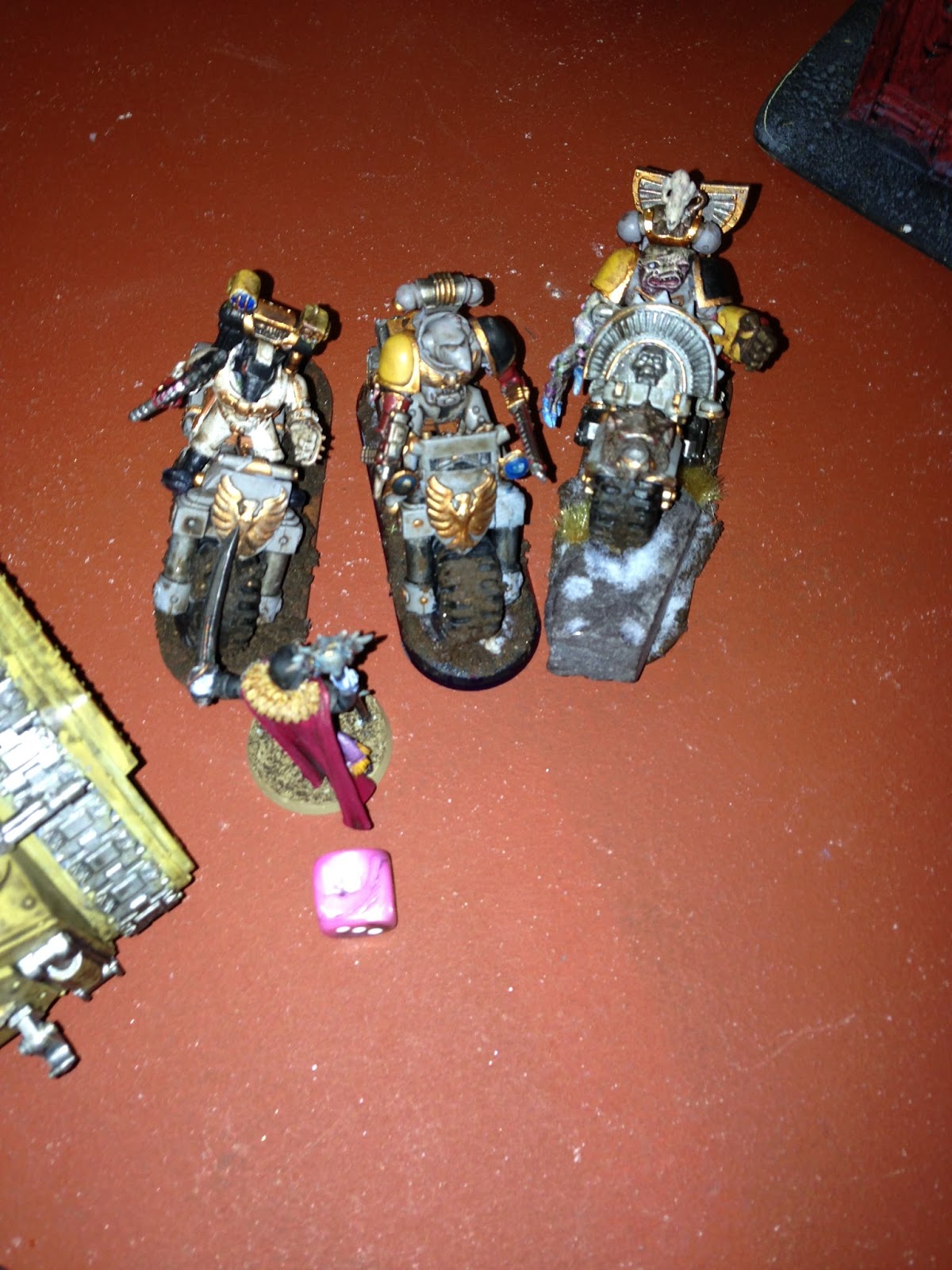 Remarkably, the Commissar Lord stayed on his feet. Unfortunately, this meant that we couldn't shoot the command squad as much as we wanted - a lot of units ended up effectively unable to shoot as a result! 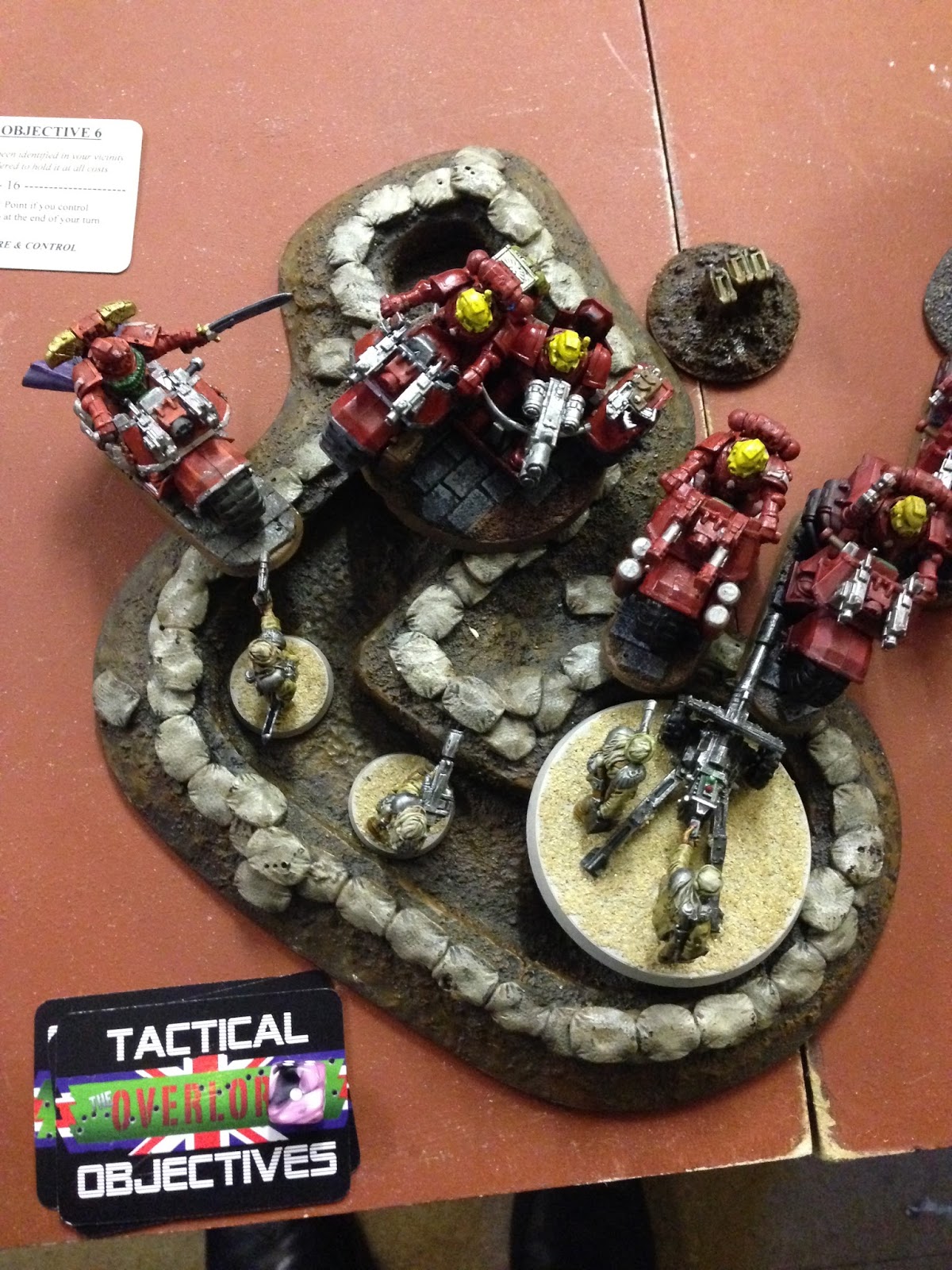 Meanwhile the Blood Angels poured into the trench network to dislodge the other Veteran Squad. 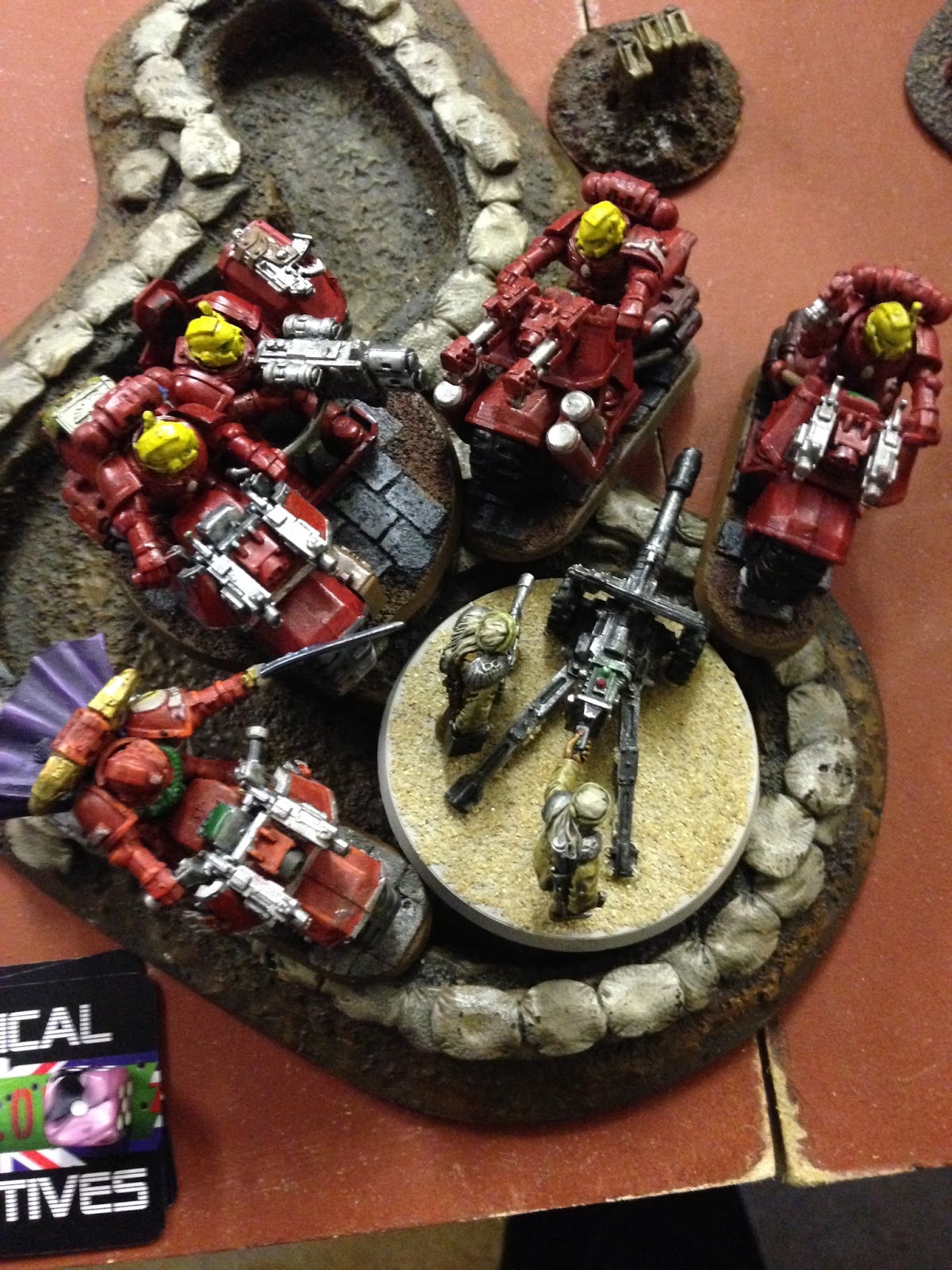 This assault, similarly, did not go well for me. 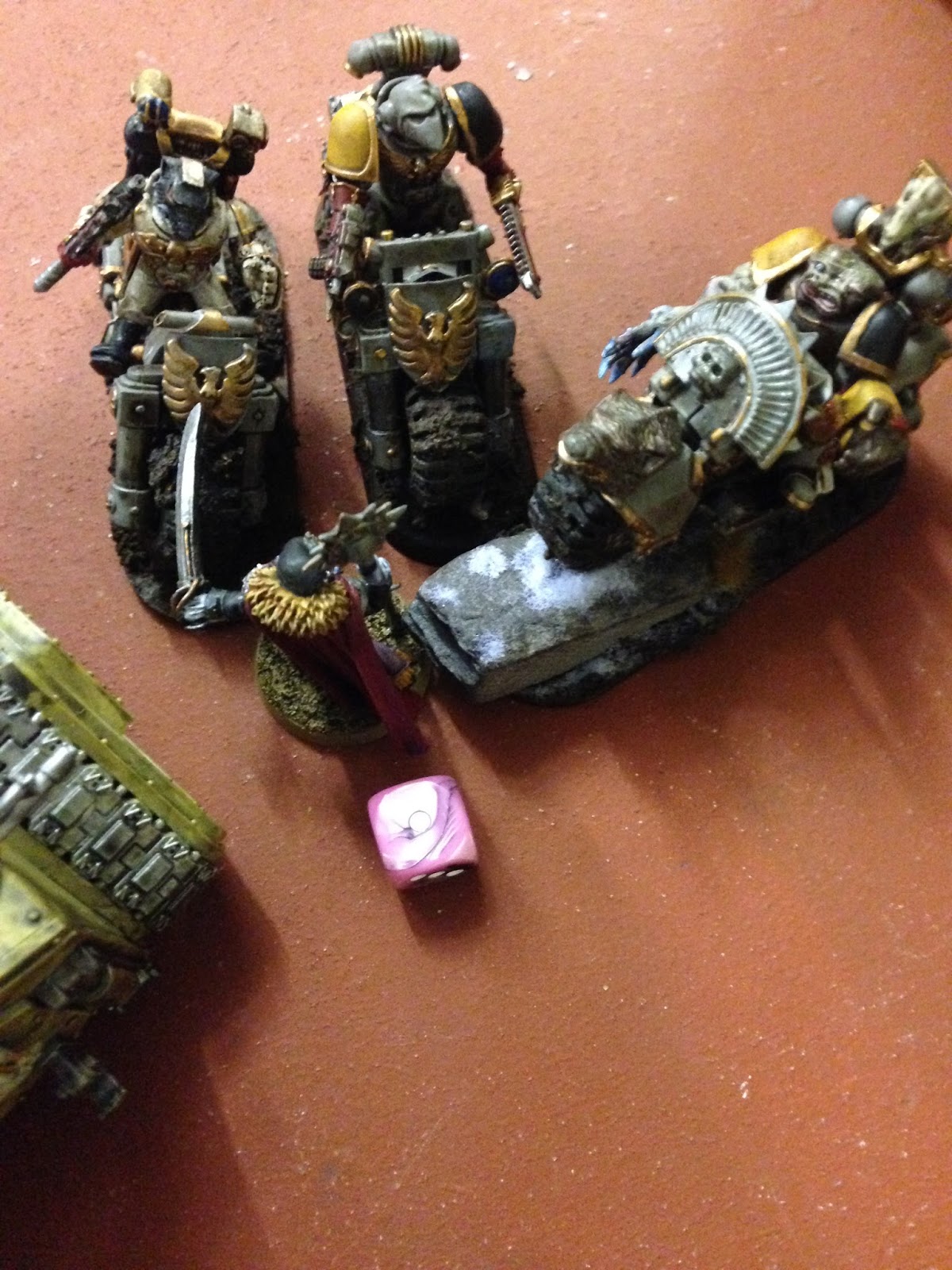 The Commissar Lord did his best, but eventually, he was run down. 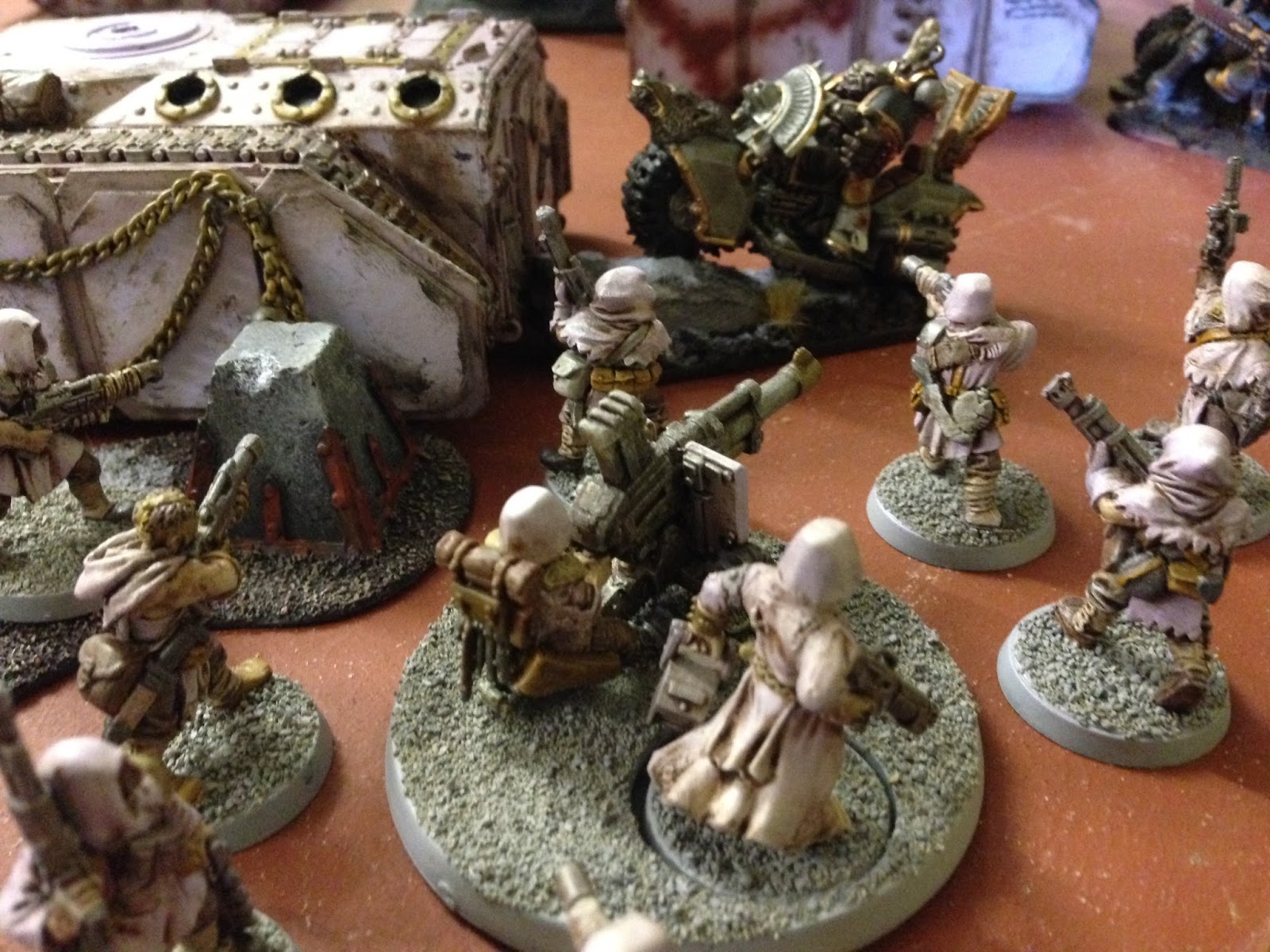 And now the renegade militia would come into their own and quickly dispatch the Space Marines, right? Right? 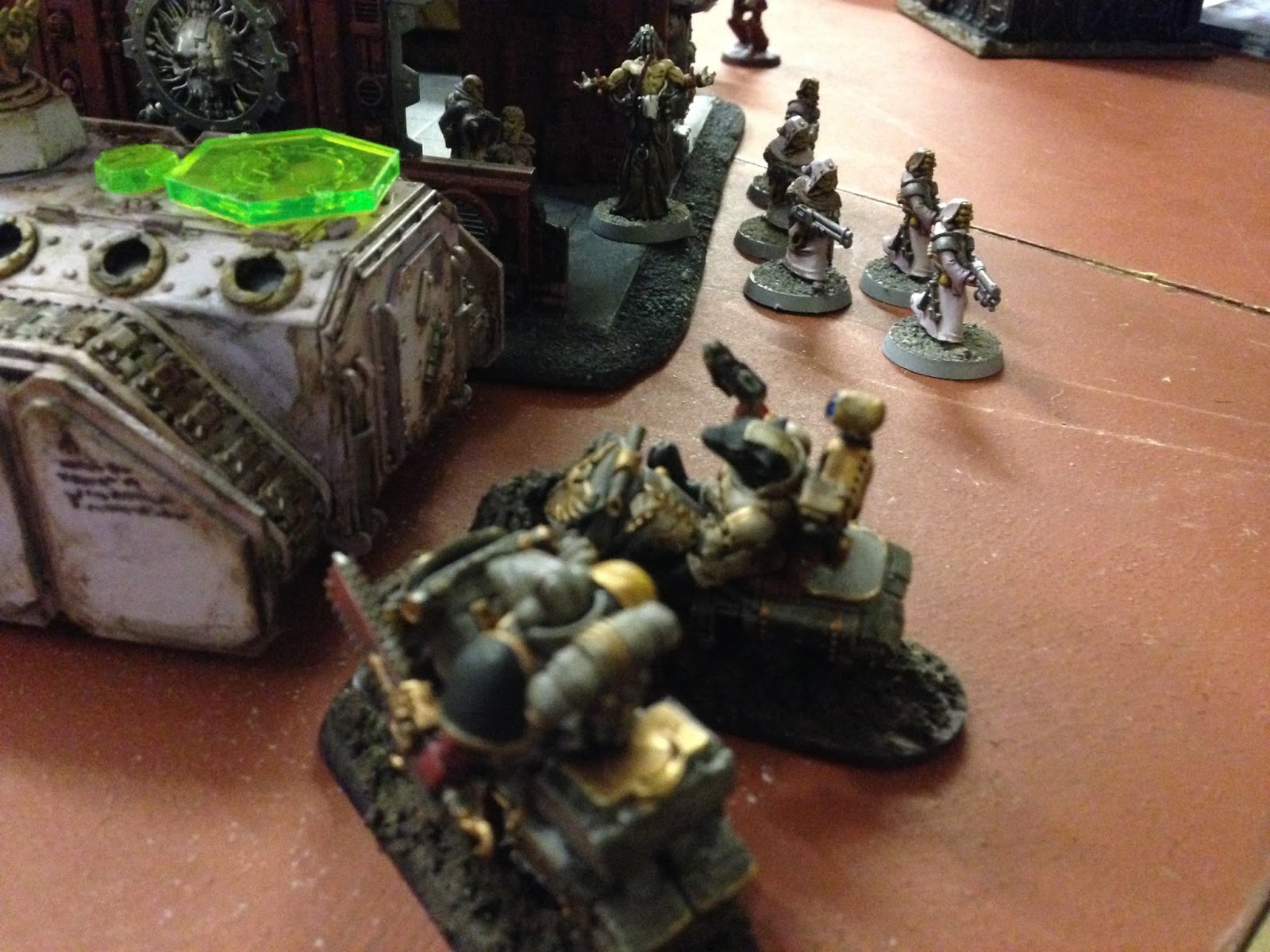 Sadly, it seems that gene-enhanced super soldiers outmatch a ragged mob of renegades, heretics and cultists, and our remaining fire was shrugged off, leaving the field in the hands of the "Nice" team, represented by the Space Marine bike teams!

At the end of the first round, the "Naughty" list were on the back foot, with the forces of "Nice" moving in for the kill. Were we luring them into a false sense of security and a trap? Tune in again soon for another instalment of "The Battle for the Pakeshi Squig"!
Posted by The Responsible One at 17:13