I have not forgotten the remaining battle reports from the Overlords Christmas event! After the first games were totted up, it seemed that the Nice forces had earned an early lead, seizing key objectives, and now looking to put the Naughty forces on the back foot. Many pockets of Naughty forces found themselves cut off and surrounded as the Nice Forces went in for the kill. 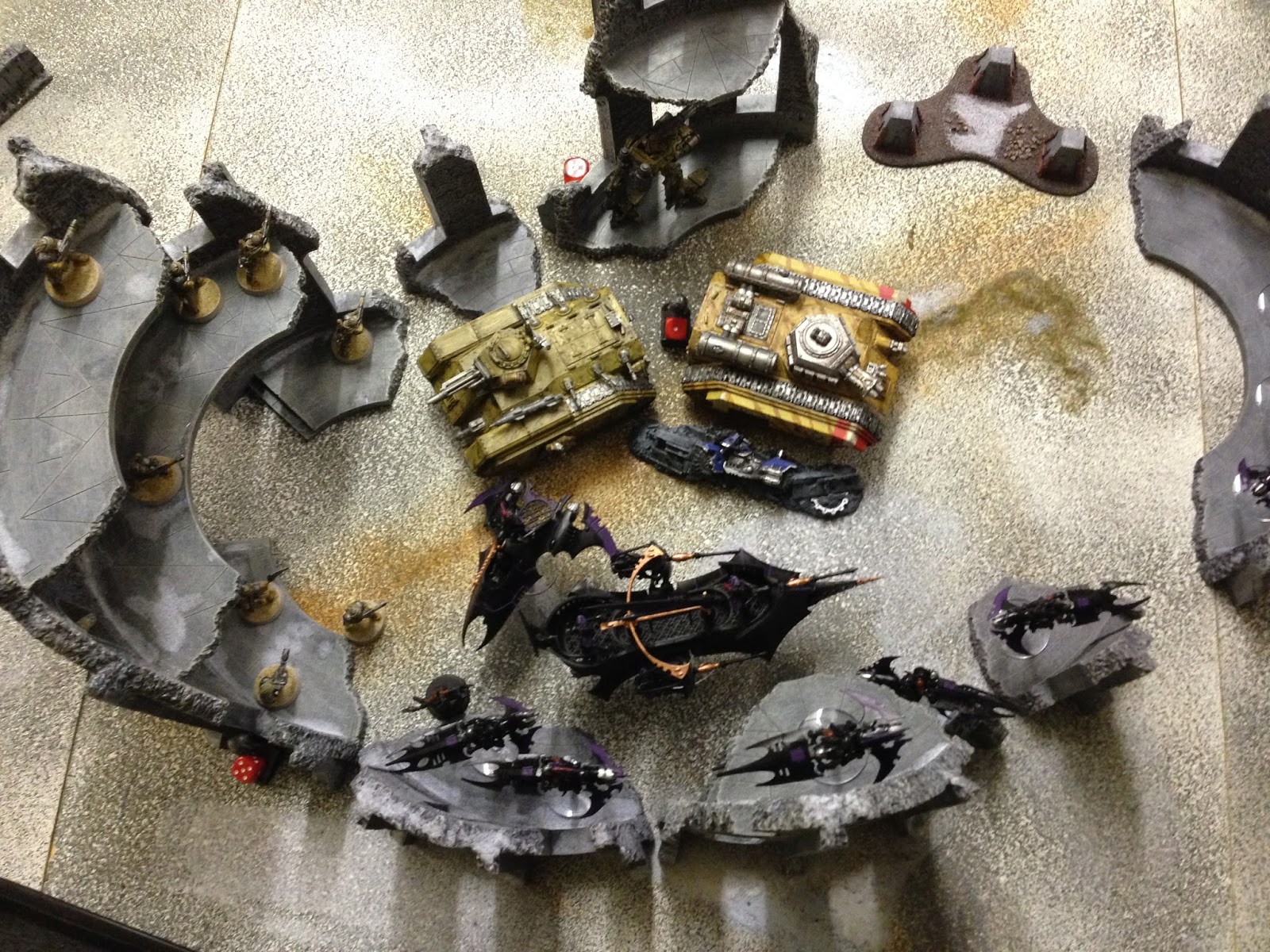 This game I was assigned some Dark Eldar allies, and the mission deployment was that we were deployed in the centre, with the Nice forces surrounding us from all sides. We had both Kill Points and the random card draws for victory points. 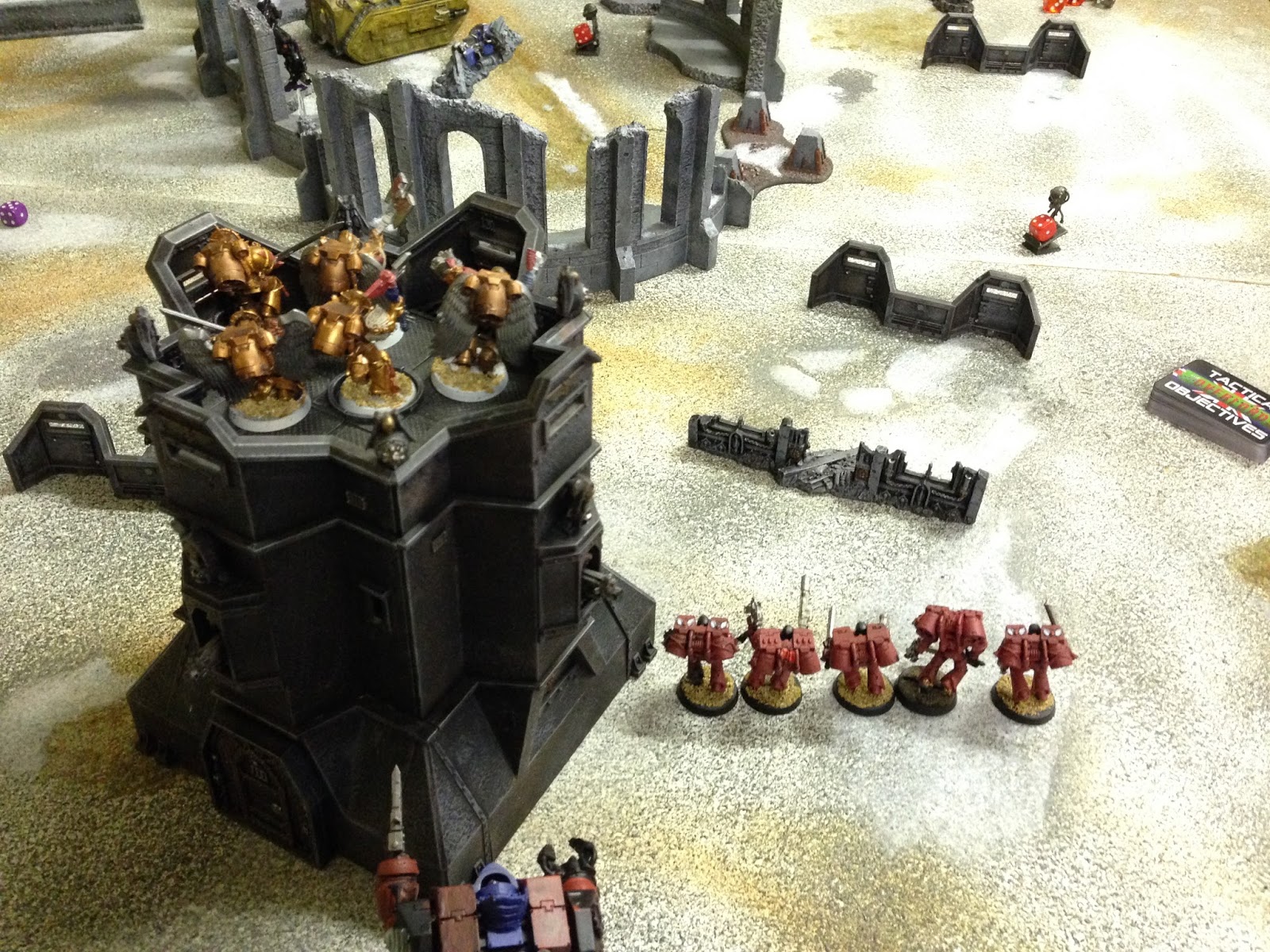 With the Blood Angels down one end of the battlefield, the Dark Eldar player grabbed me for a quick huddle and we agreed to run over and beat up the Eldar, hopefully before the Blood Angels got to us. We needed to do it that way around as the Eldar were much quicker and would have been on us before we'd finished off the Blood Angels. 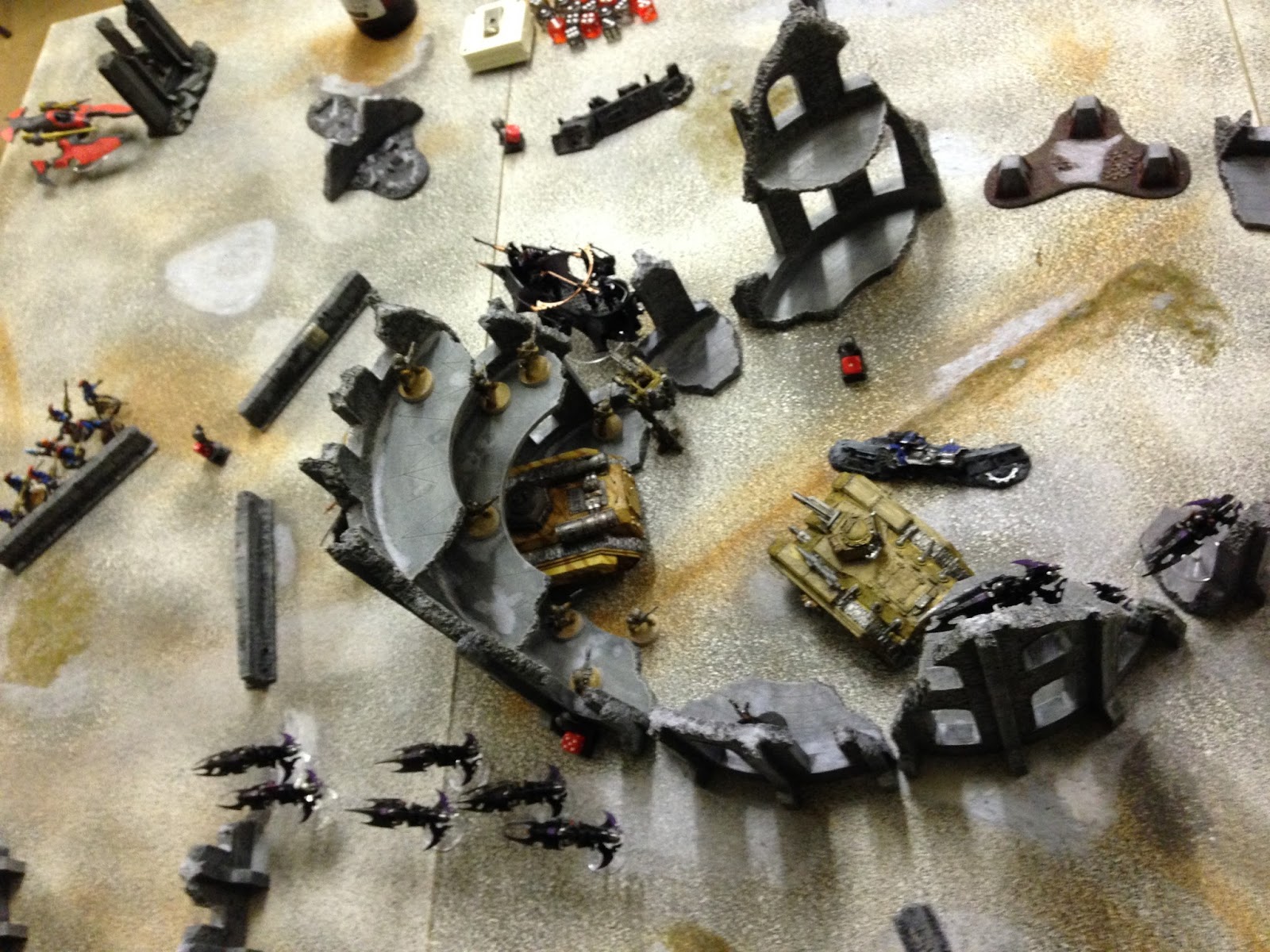 The plan started off reasonably well, although in the first turn, we didn't manage to kill quite as many of the Eldar as we'd have liked. 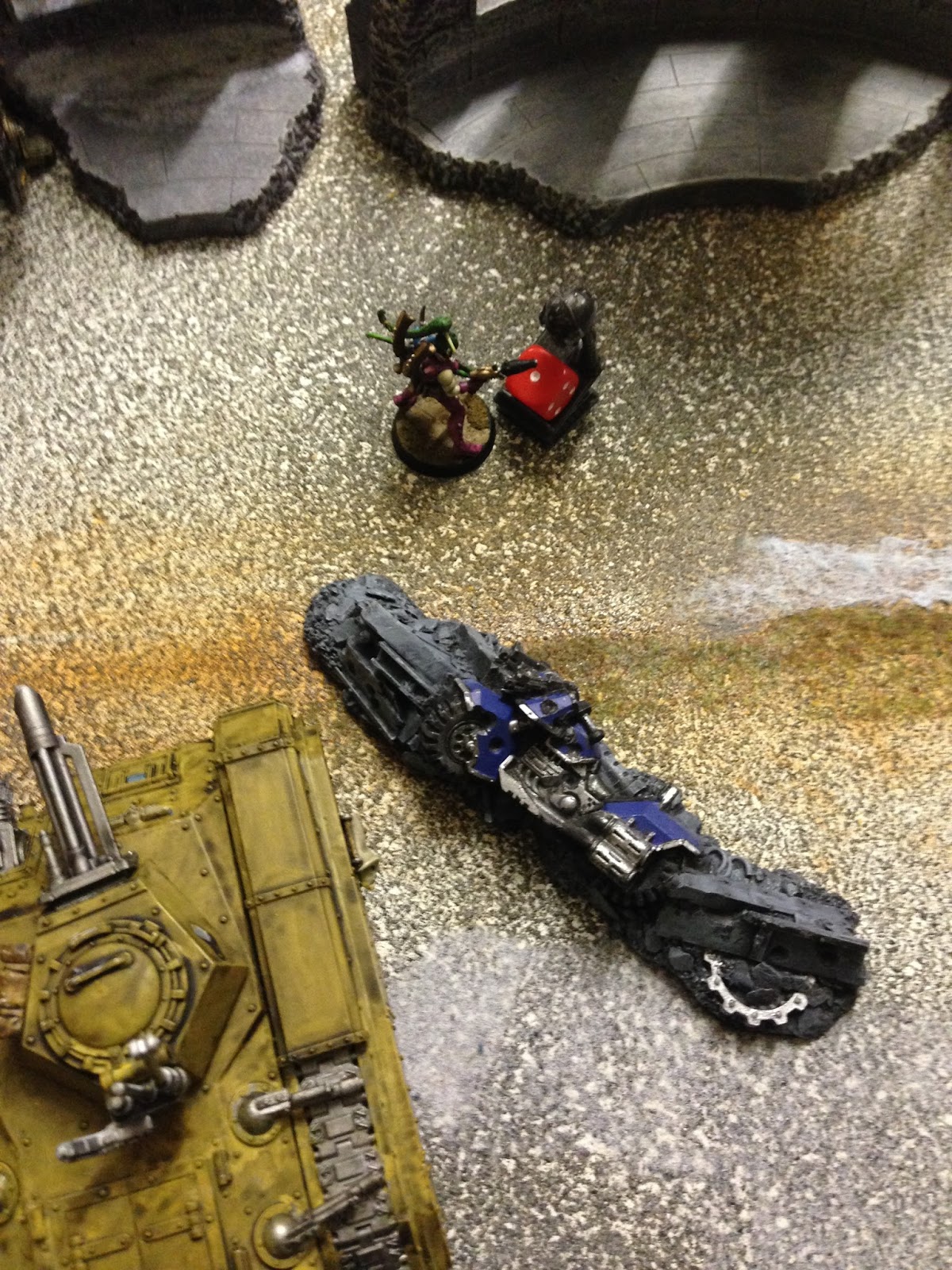 The Nice team rolled up the "Governor's Daughter" objective, where they had to rescue the civilian from a randomly determined objective. They were unlucky enough to have it turn up at the objective at the centre of the board! 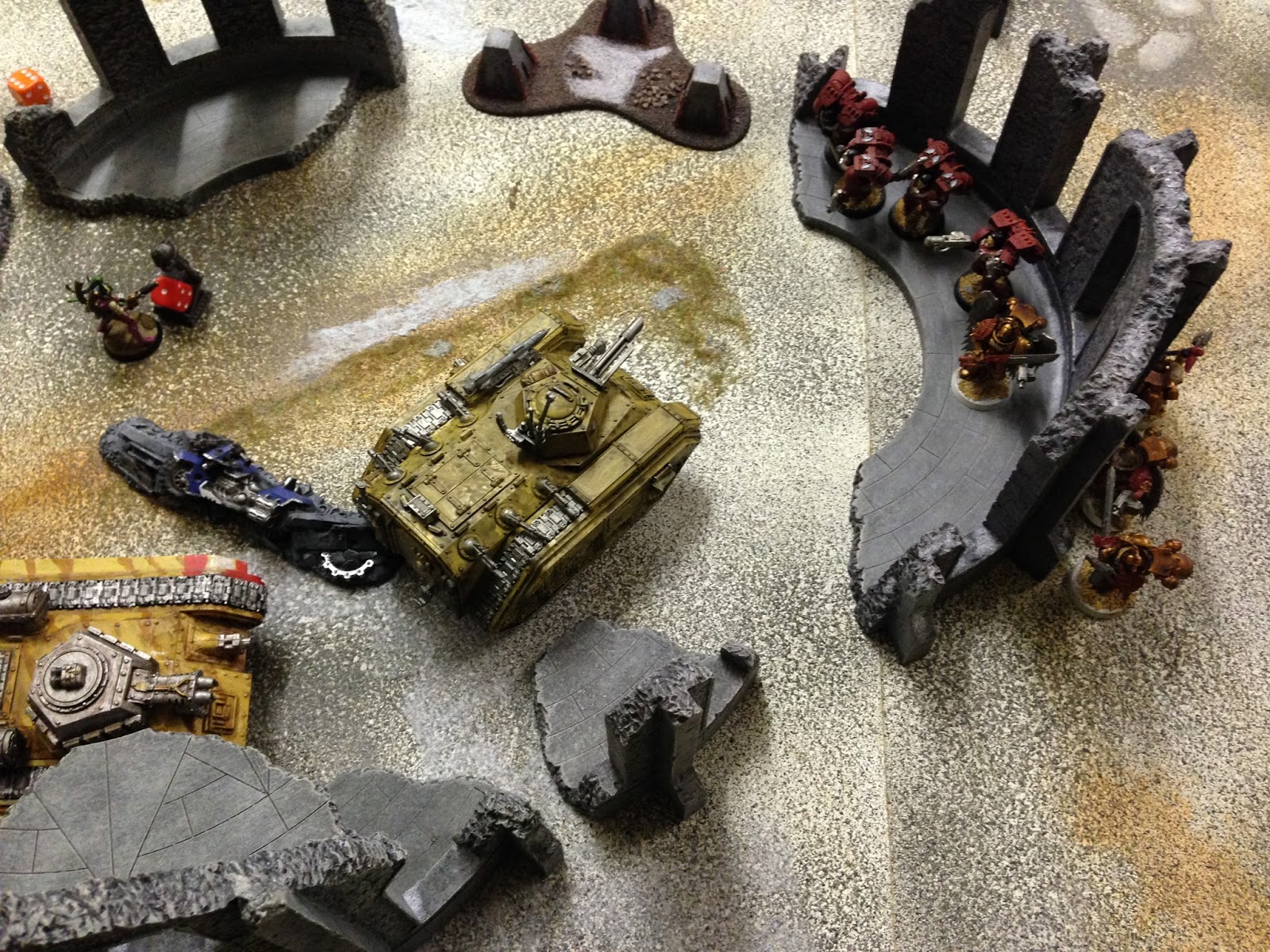 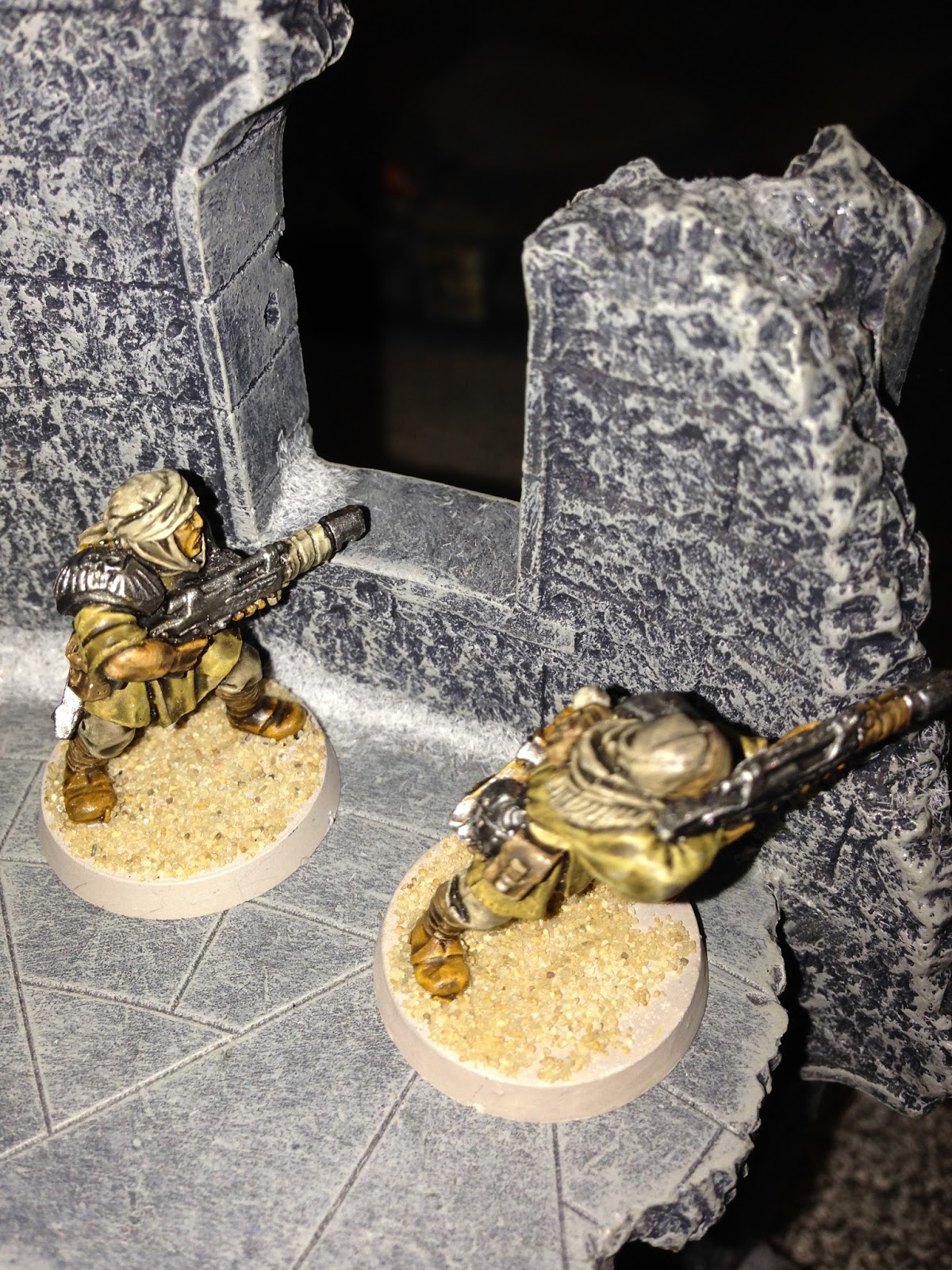 The Eldar were still taking fire from the foot squad in the ruins. 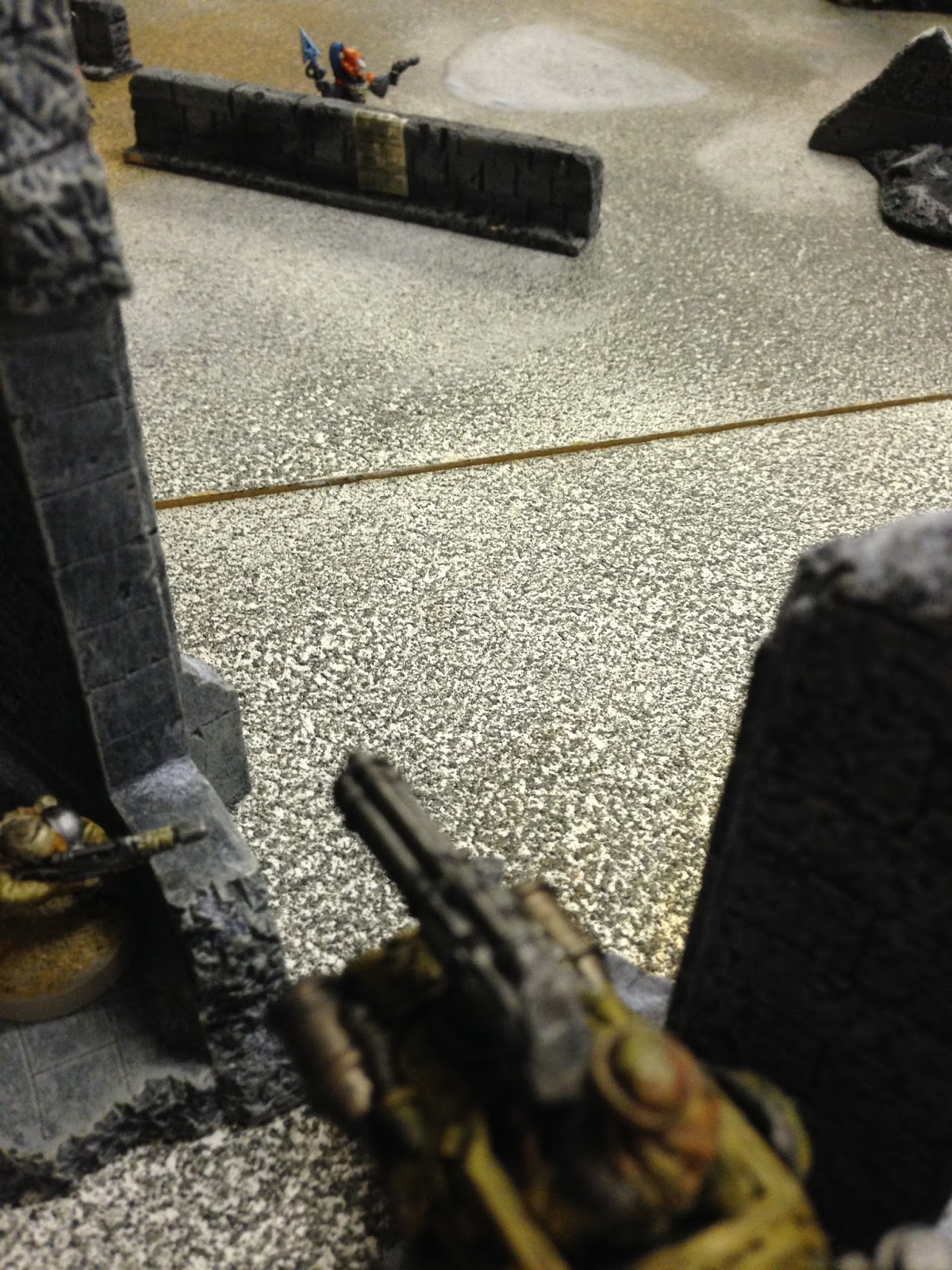 The Sentinel finished off the Eldar Psyker, after the Hellhound had taken out the Dire Avengers he'd been leading. 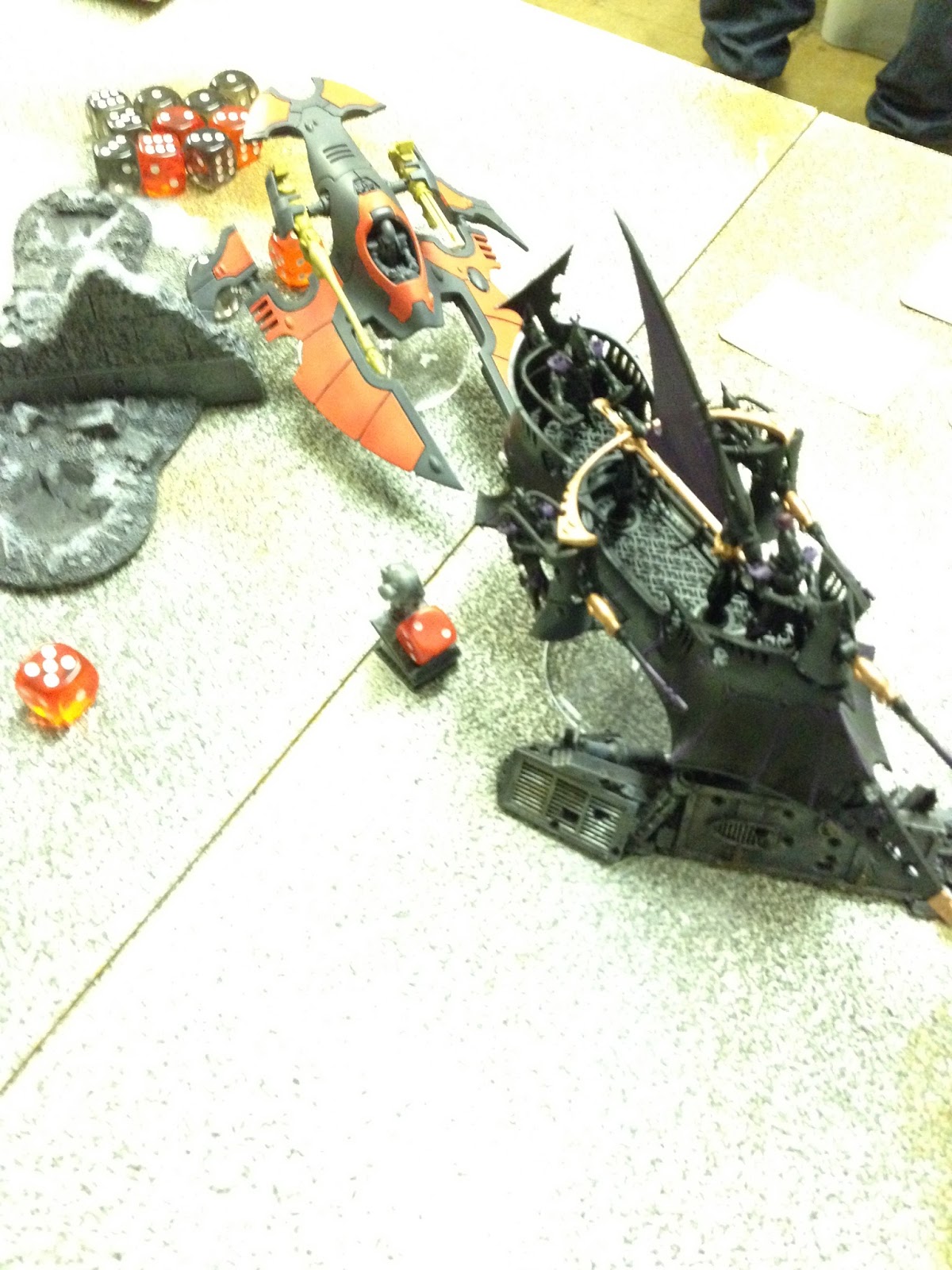 A second Eldar Hornet arrived and the Ravager suddenly had some problematic company. 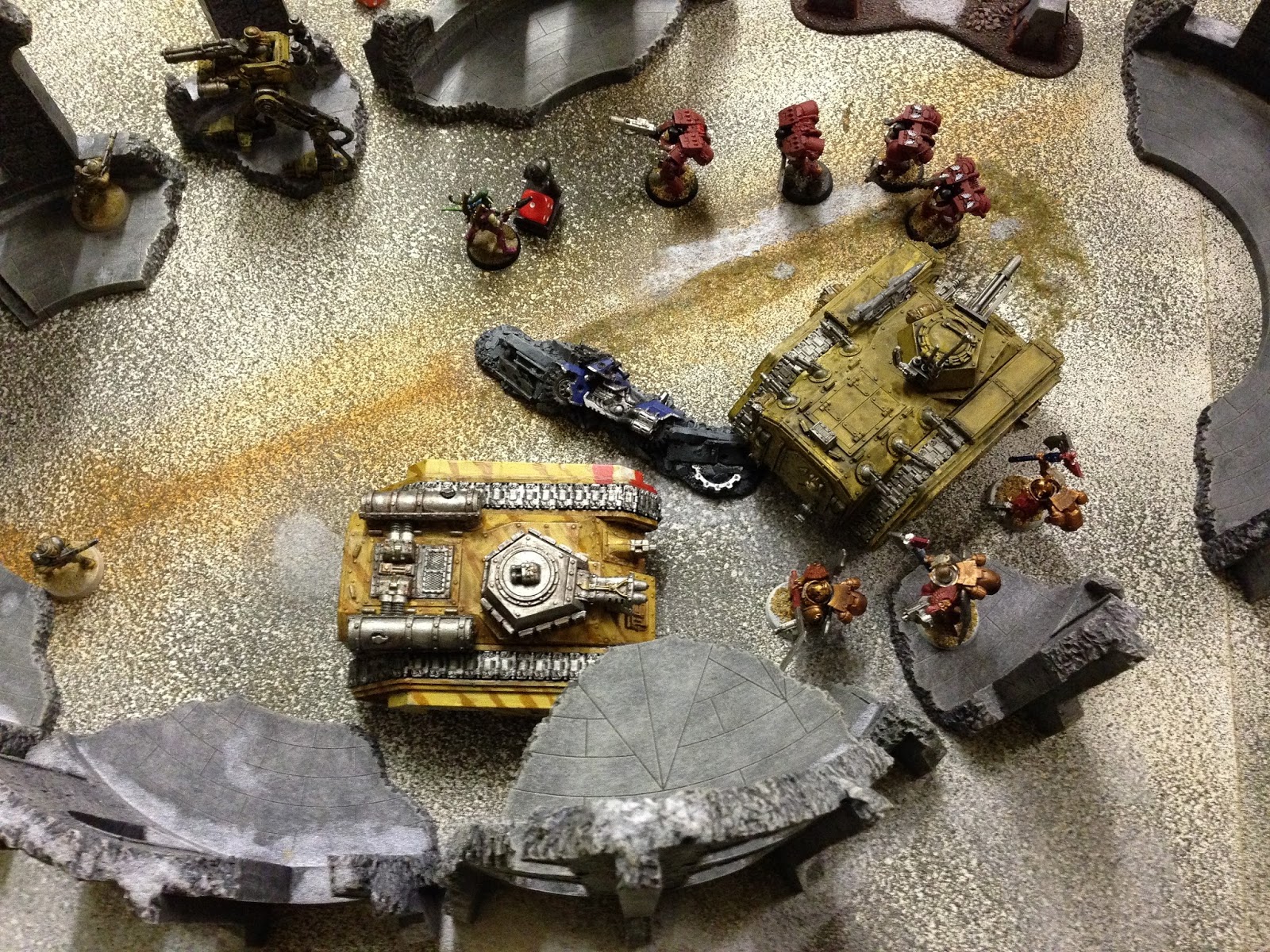 The Blood Angels were all over the Guard, and had reached the VIP. We were definitely in trouble! 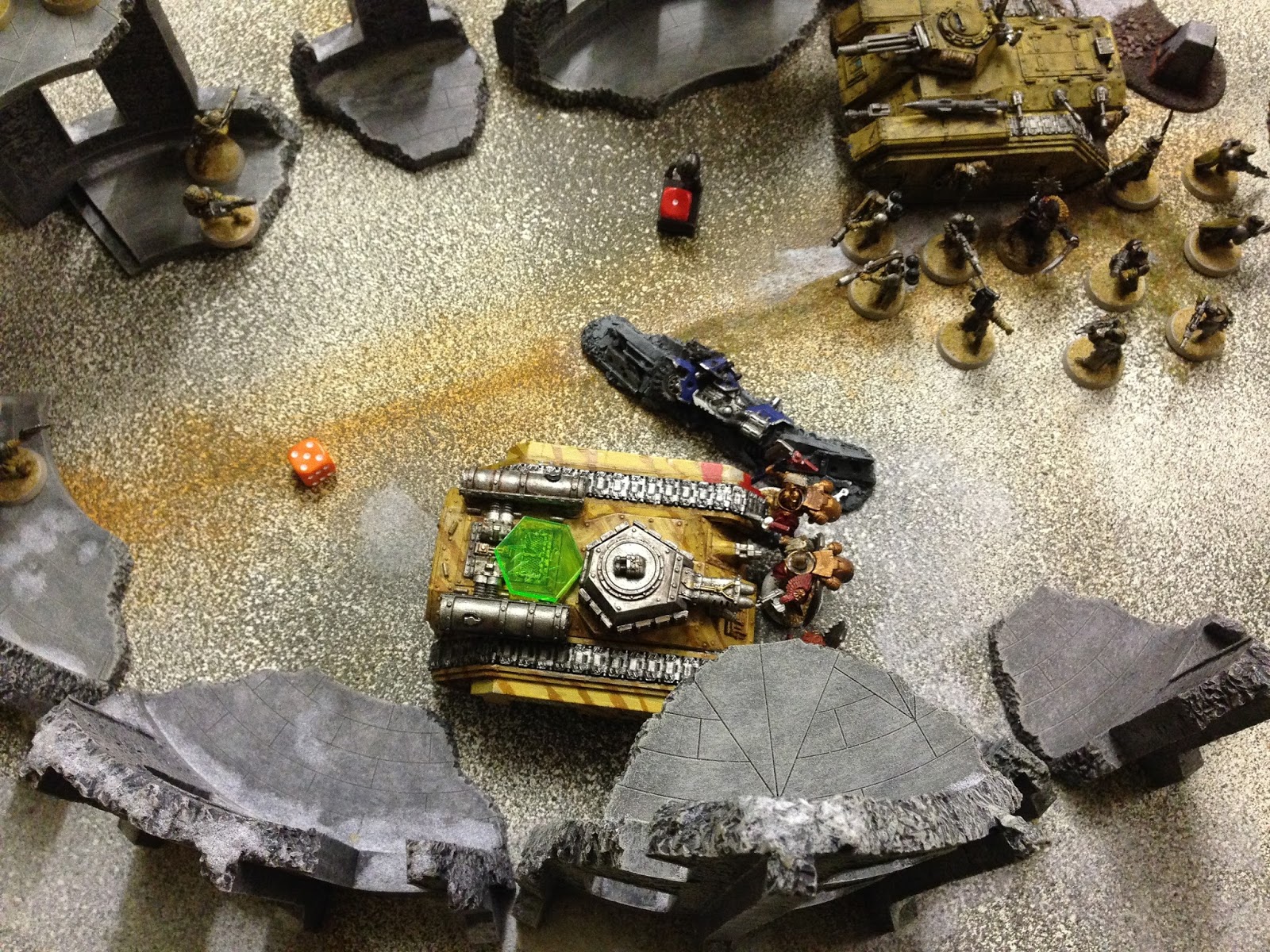 The Guard managed to gun down the Assault Marines and the VIP, but the Hellhound was done for. The demolition veterans bailed out of the Chimera before it got taken out, so they had a chance of getting into assault. 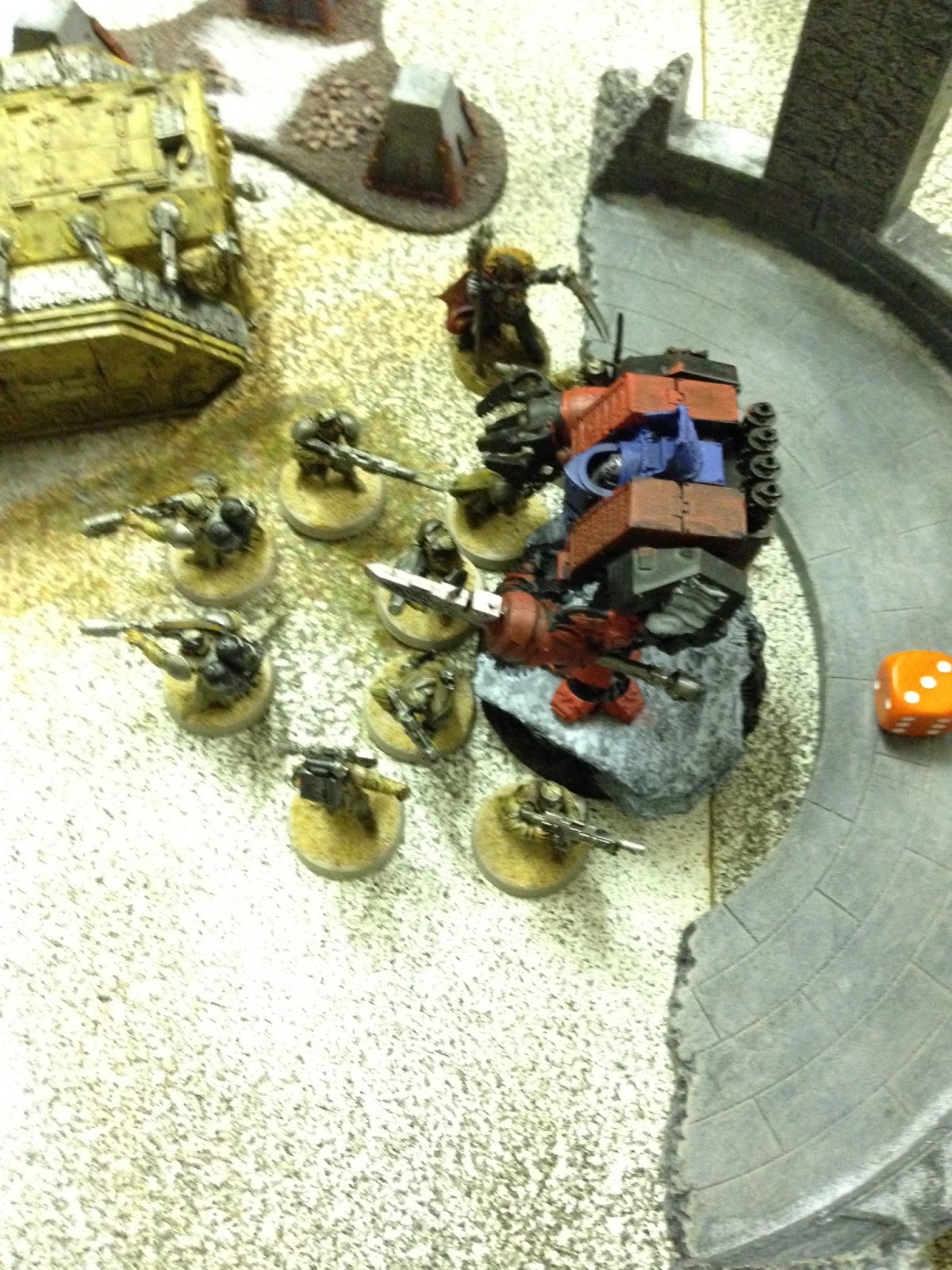 The Librarian Dreadnought charged the demolition vets, and paid for it, being brought down by Melta Bombs.

Overall, while the Guard had taken some casualties and the odd Dark Eldar skimmer had gone down, we had a clear lead in victory points. The "divide and conquer" plan had paid off, and Naughty was back in the game...
Posted by The Responsible One at 12:25