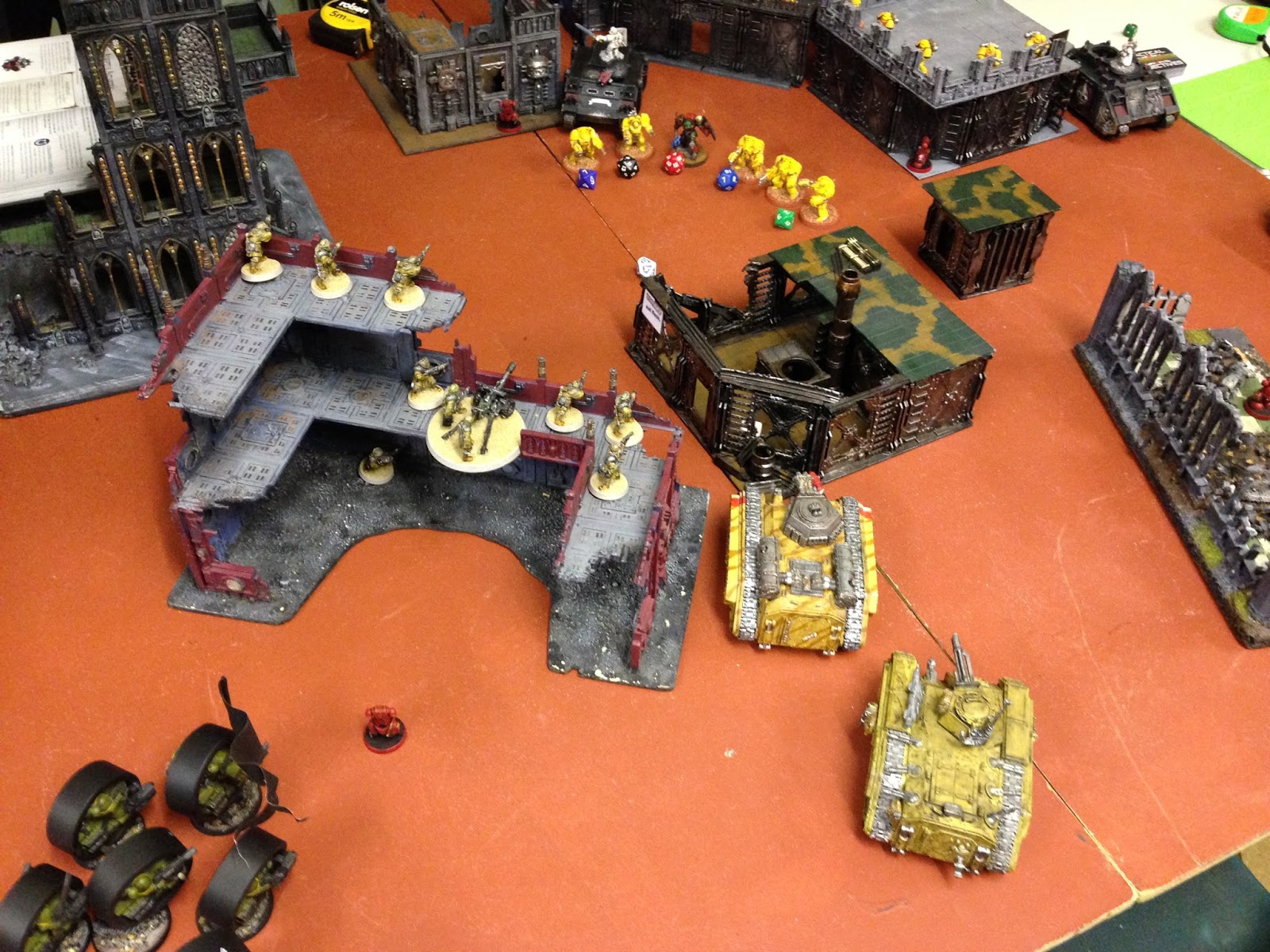 With everything at a dead tie, we went into the final round. This was a pretty standard mission with strategy cards, and deploying in table quarters. The only complication was that it was the one where you draw mission cards equal to the number of objectives you're controlling. I was paired with a Space Marine bike list run by one of the gentlemen from HATE. We were paired against the tactical genius of Jason and Inquisitor Steve from the Overlords. 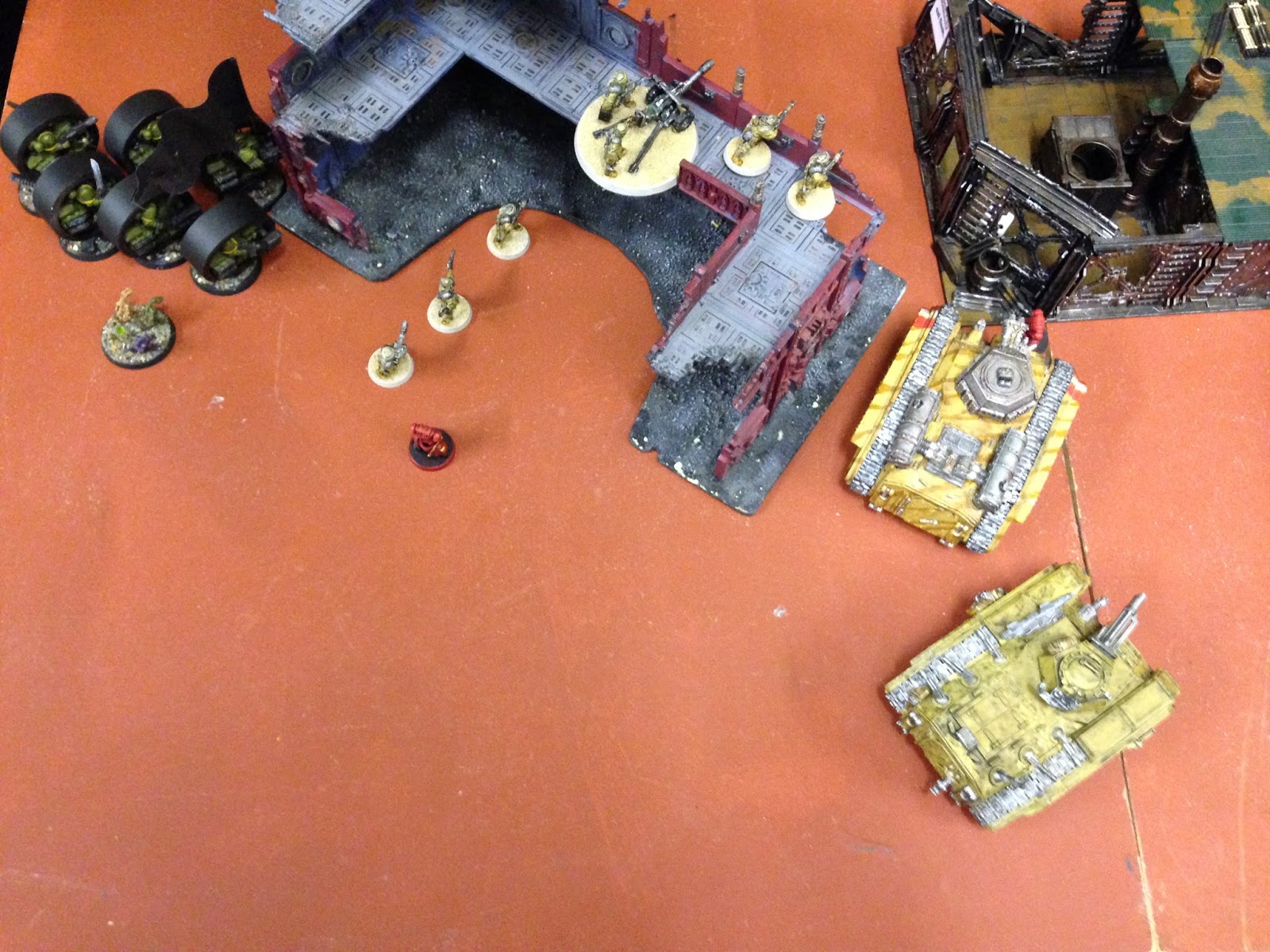 Due to some interestingly placed objectives, we ended up with the odd strange placement, like these Guardsmen holding a ruin while also running a line of guys back to claim the objective. 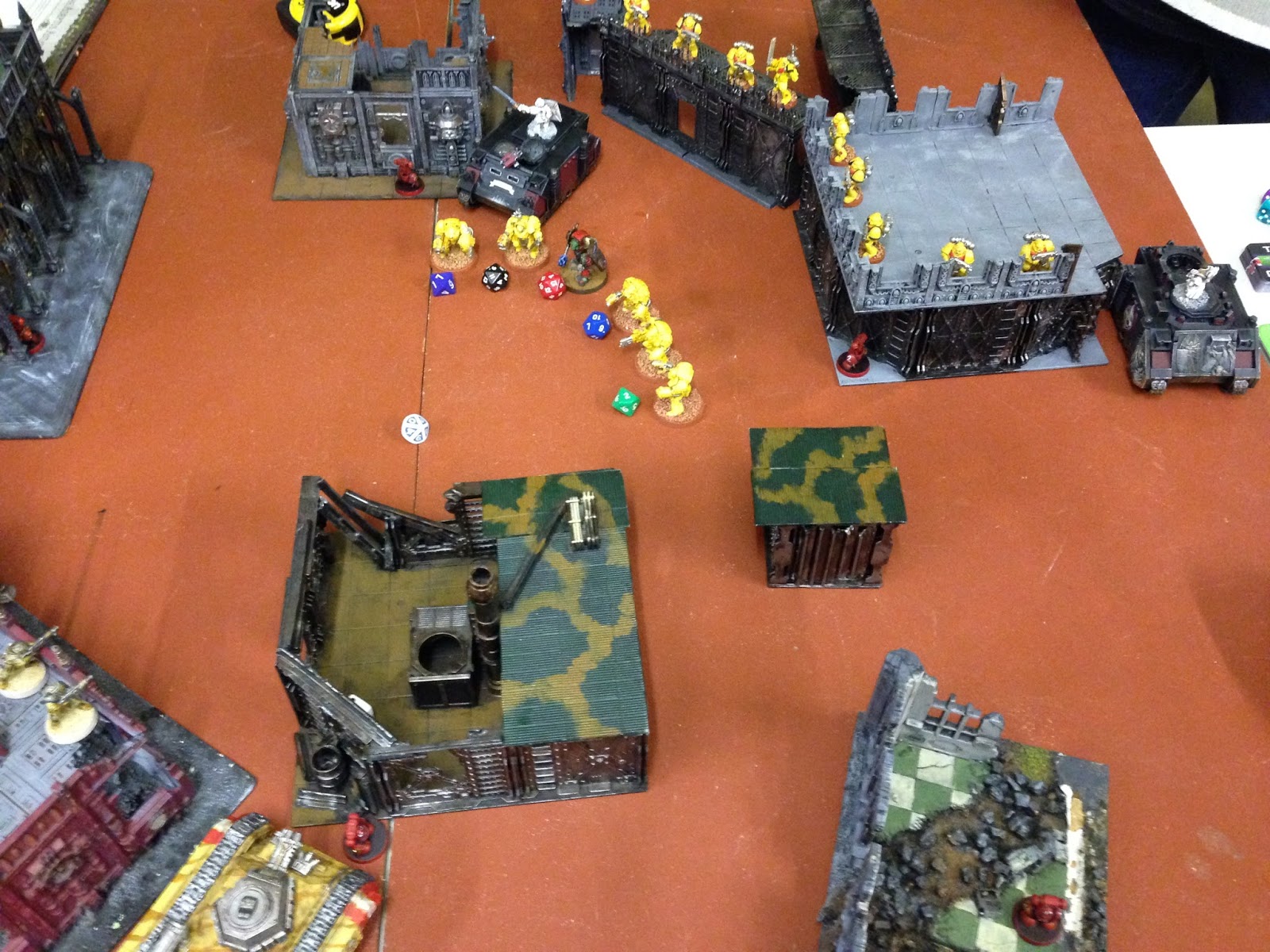 Jason hadn't been expecting to play, so borrowed some models from the club Imperial Fists army, and kept it super simple - Terminators, Tactical Marines and a Captain. Steve had a Battle Sister Squad in a Rhino, then a Canoness, an Inquisitor, and a bunch of henchmen in a second Rhino. 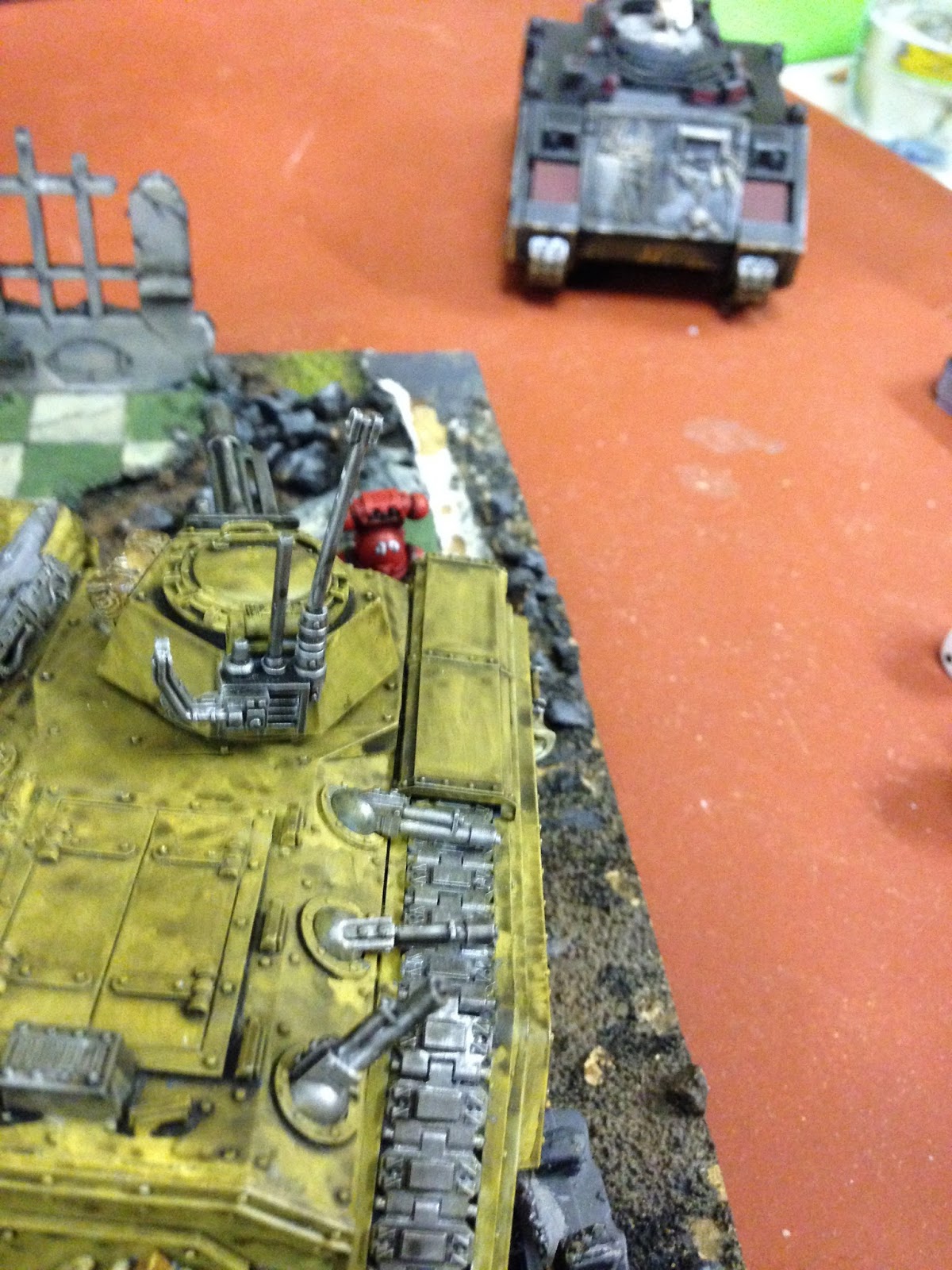 The Chimera full of Veterans raced out to the right flank to deal with the Rhino full of Sisters. It managed to get into the ruins without getting immobilised, which was a first for me! 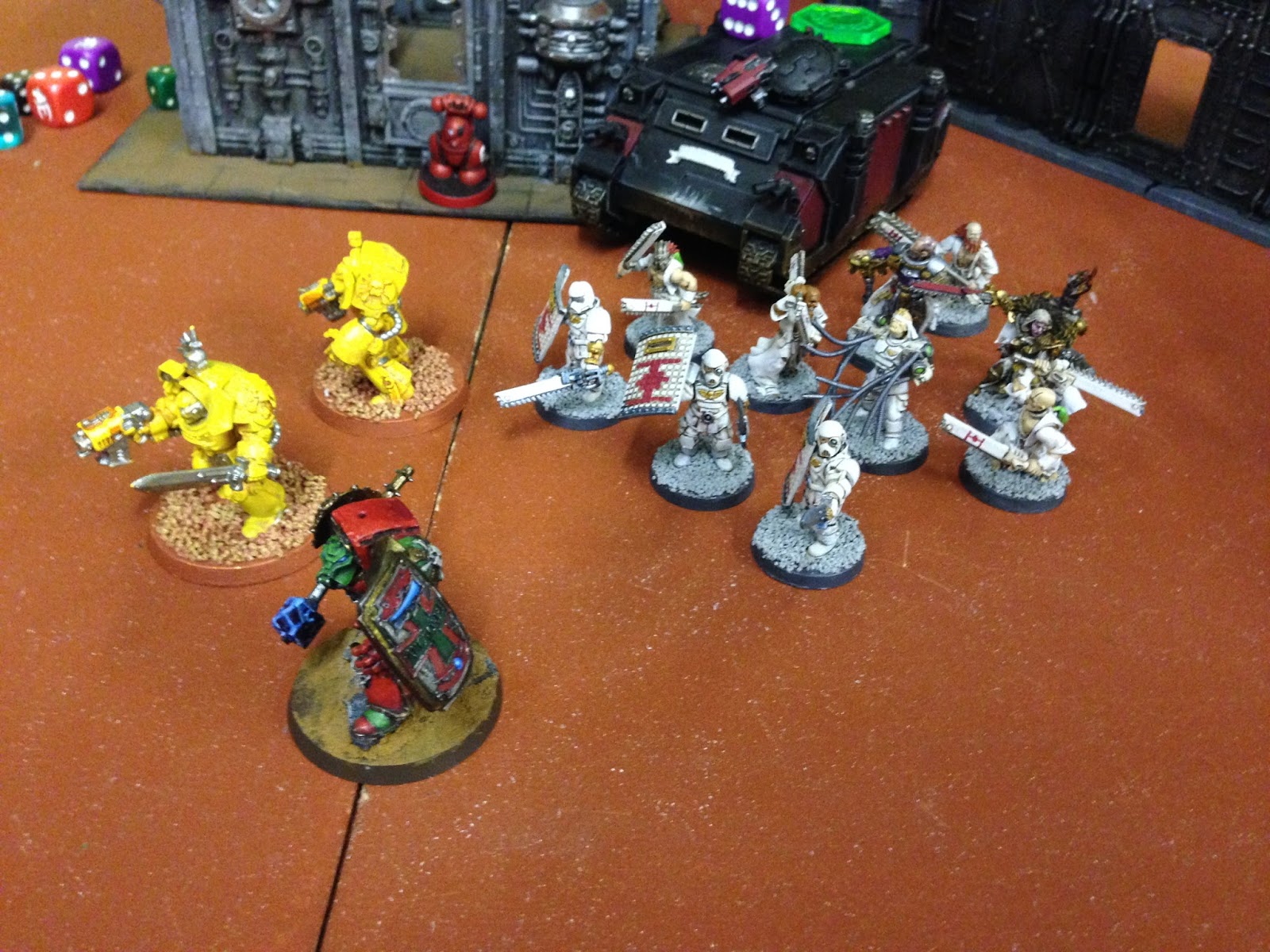 Meanwhile, we managed to luckily immobilise the other Rhino, forcing the Henchmen and characters to walk. 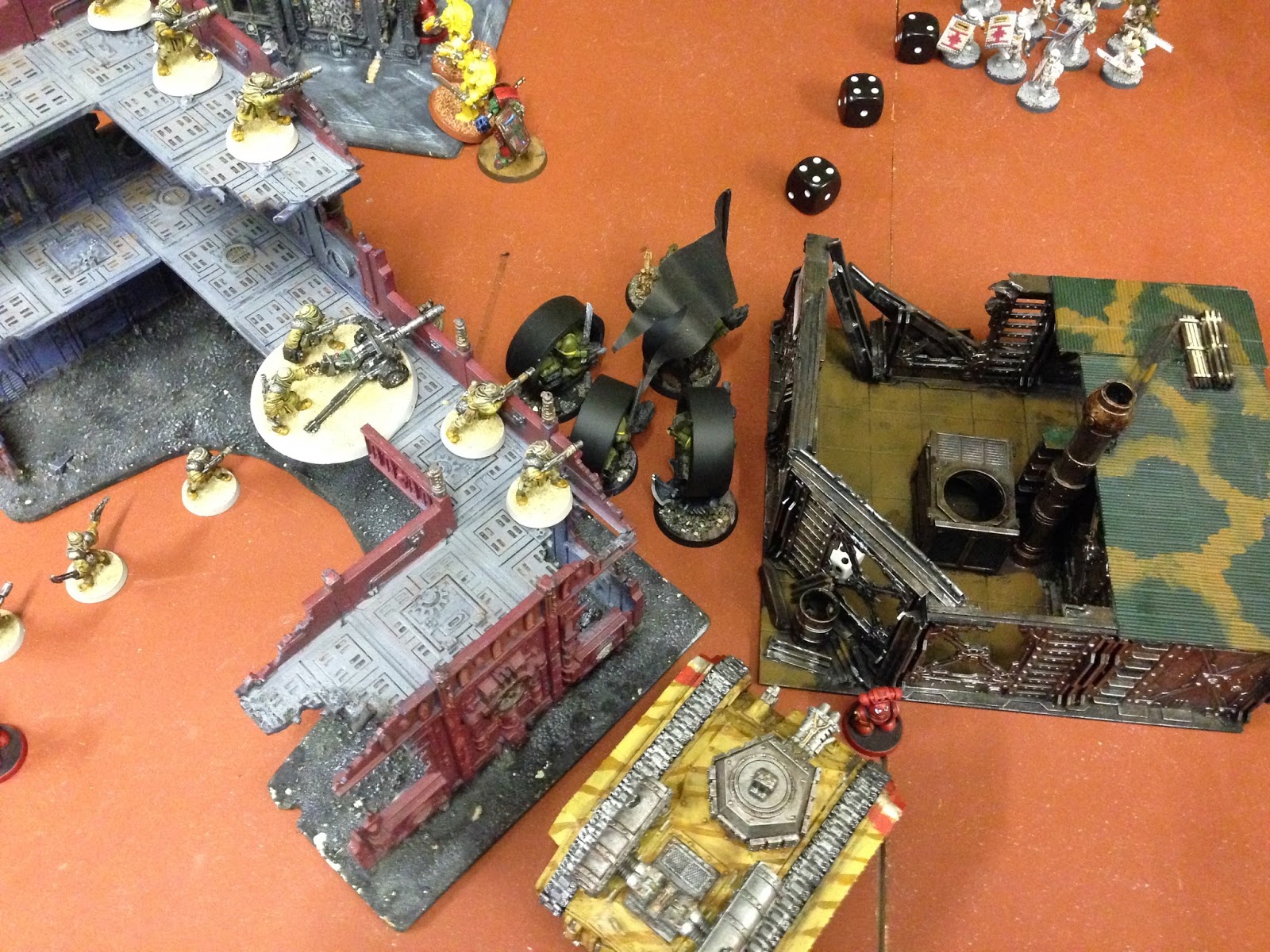 The monowheel bikes allied to me get into a scrap with the Terminators, then Hit and Run out to let them hit someone else next turn. 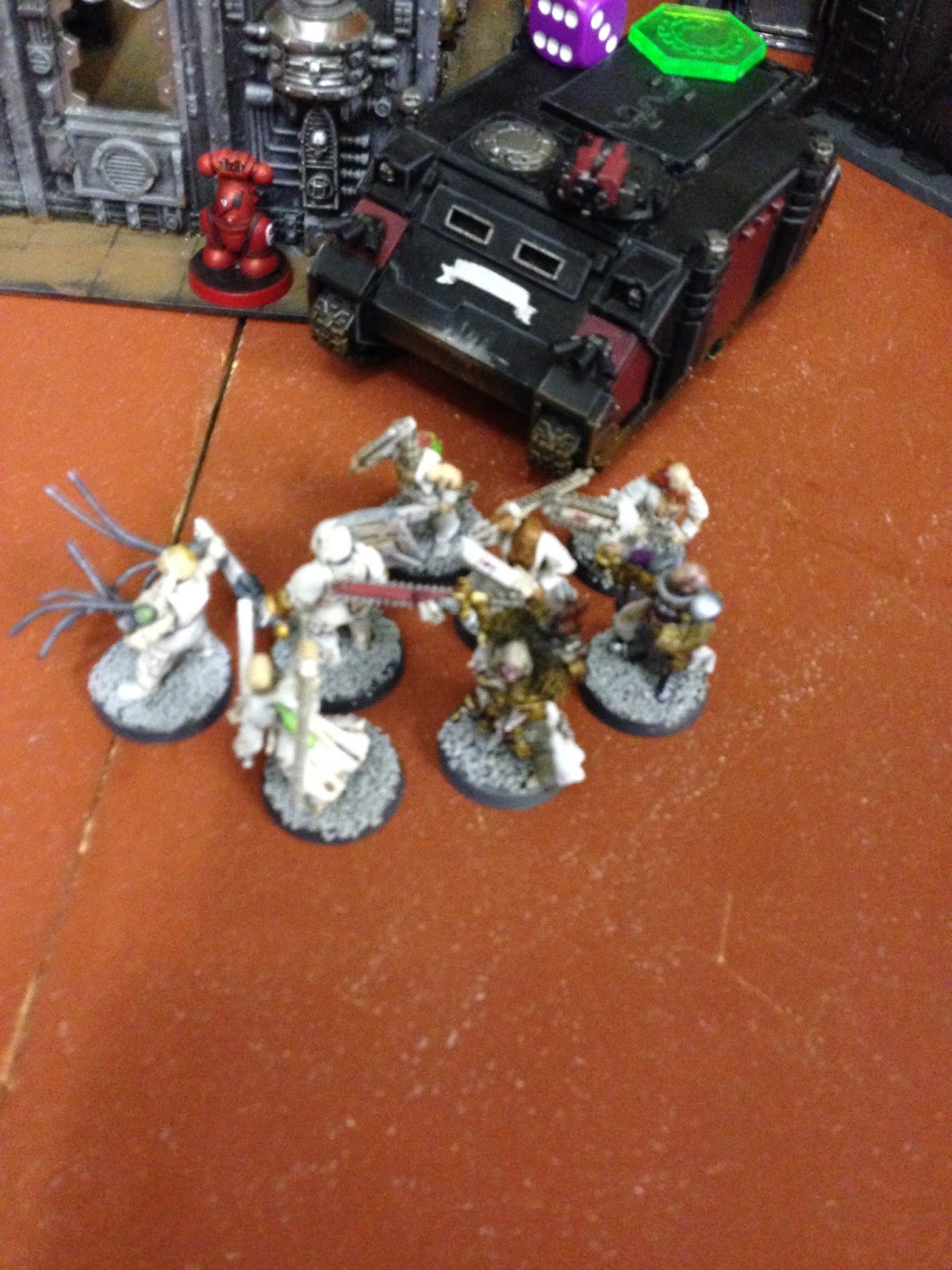 Unfortunately, we underestimate quite how tough henchmen squads are, and we take a bit of a kicking from them! 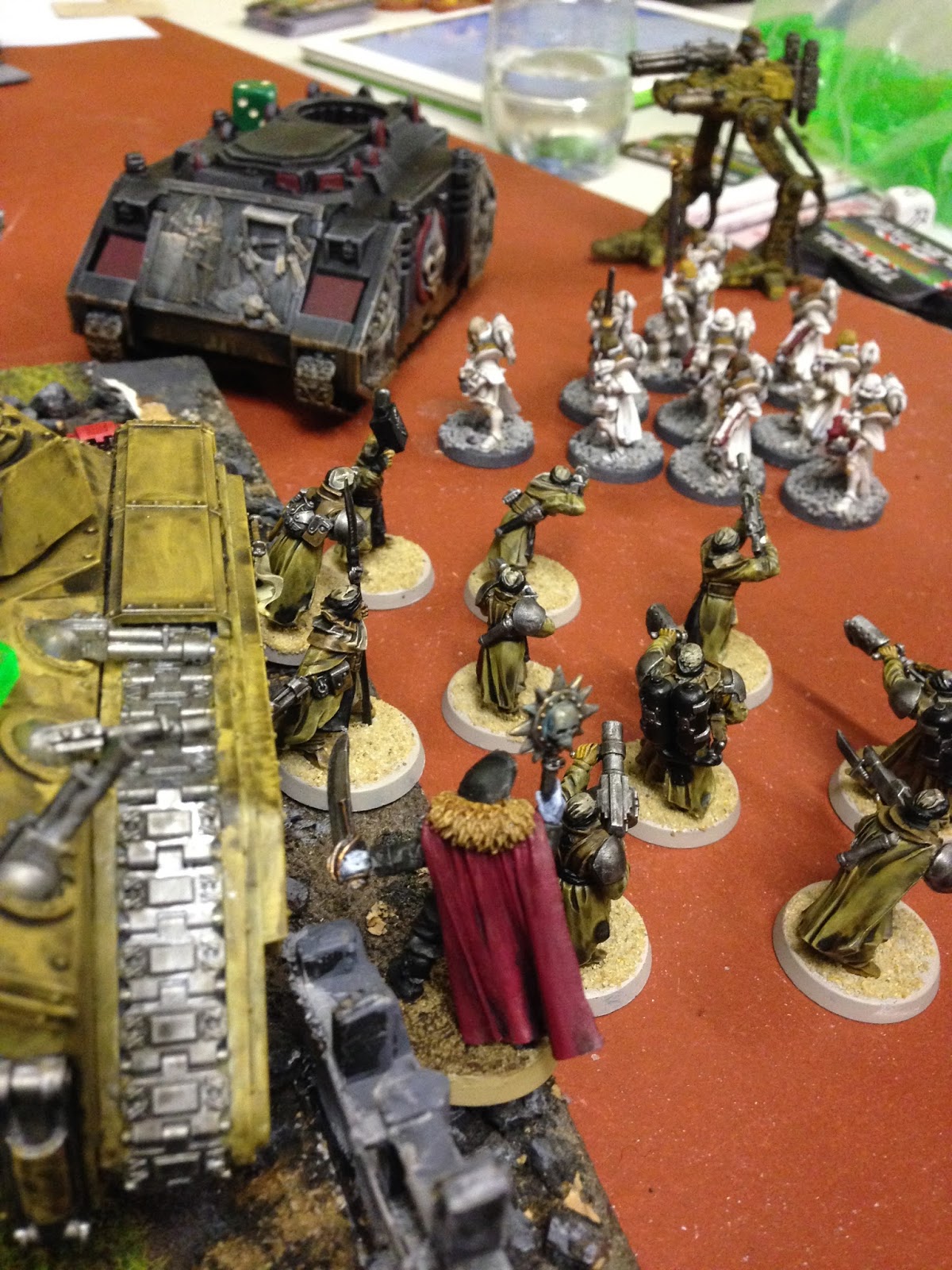 The Chimera gets immobilised trying to get out of the ruins. I should have known! Meanwhile, my Scout Sentinel turns up somewhere useful from Outflank to shoot some people in the back. 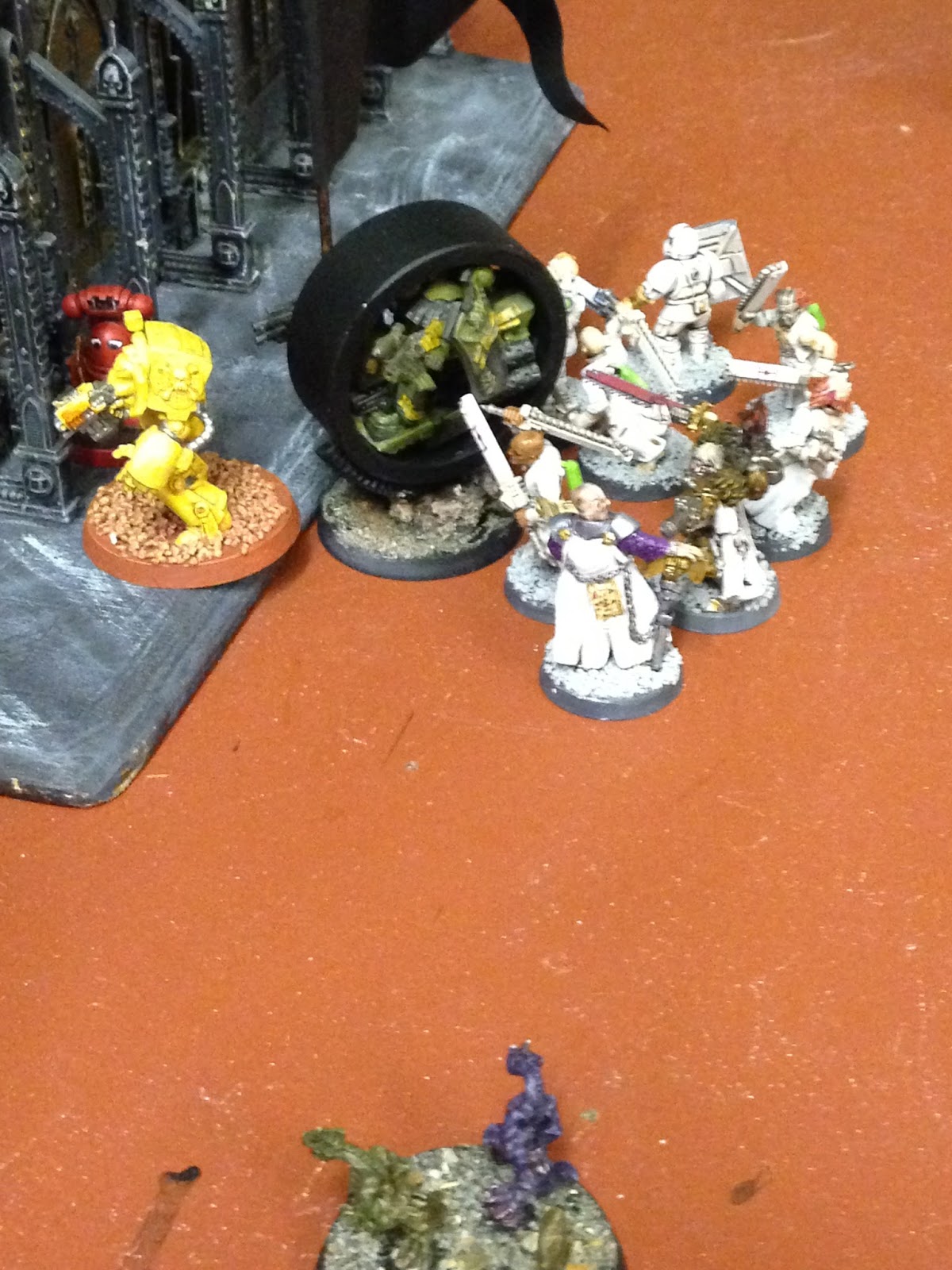 The henchmen are causing us real problems! 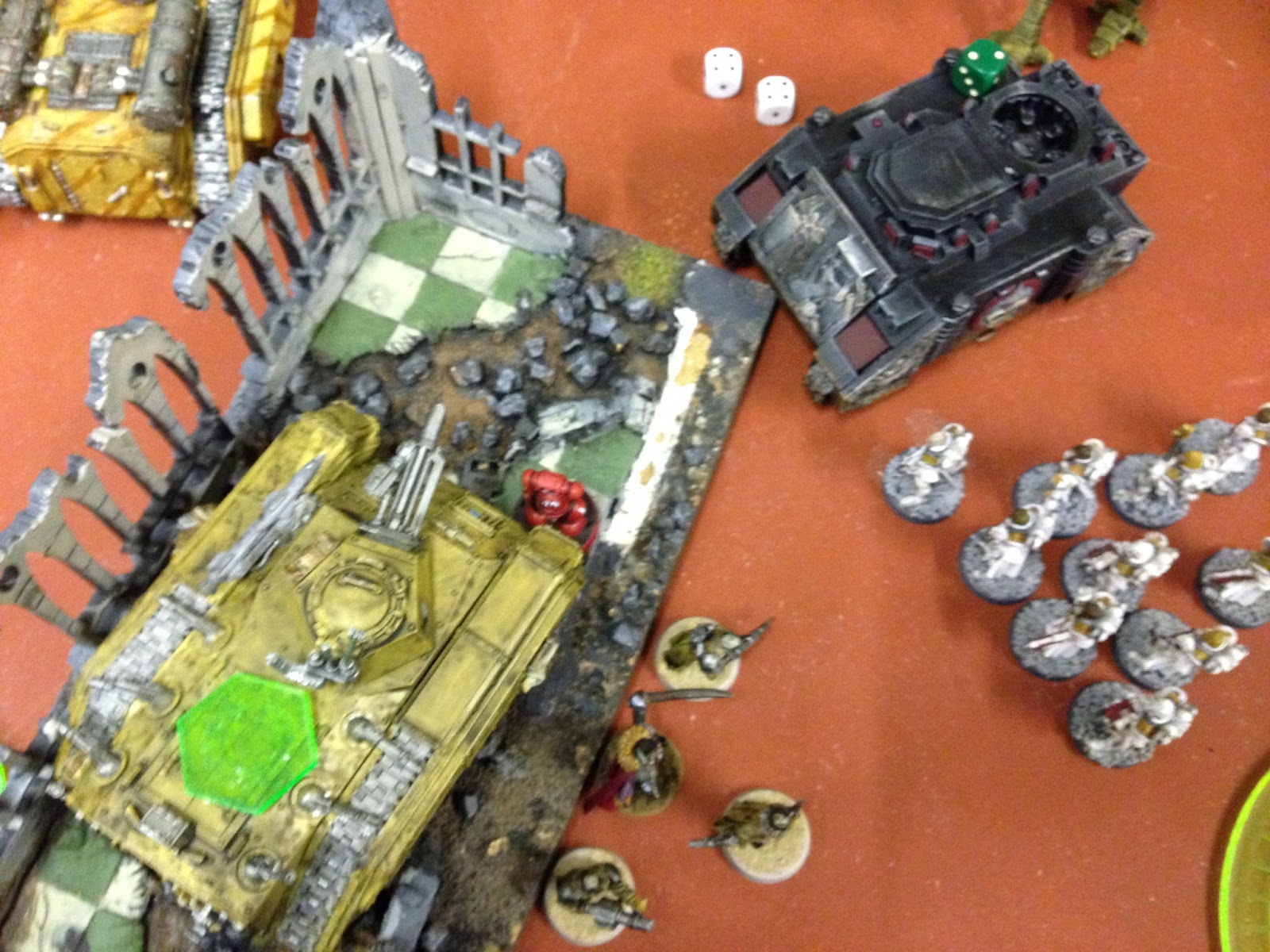 The demo charge fails me, and the revenge fire blasts many of the Veterans to death. 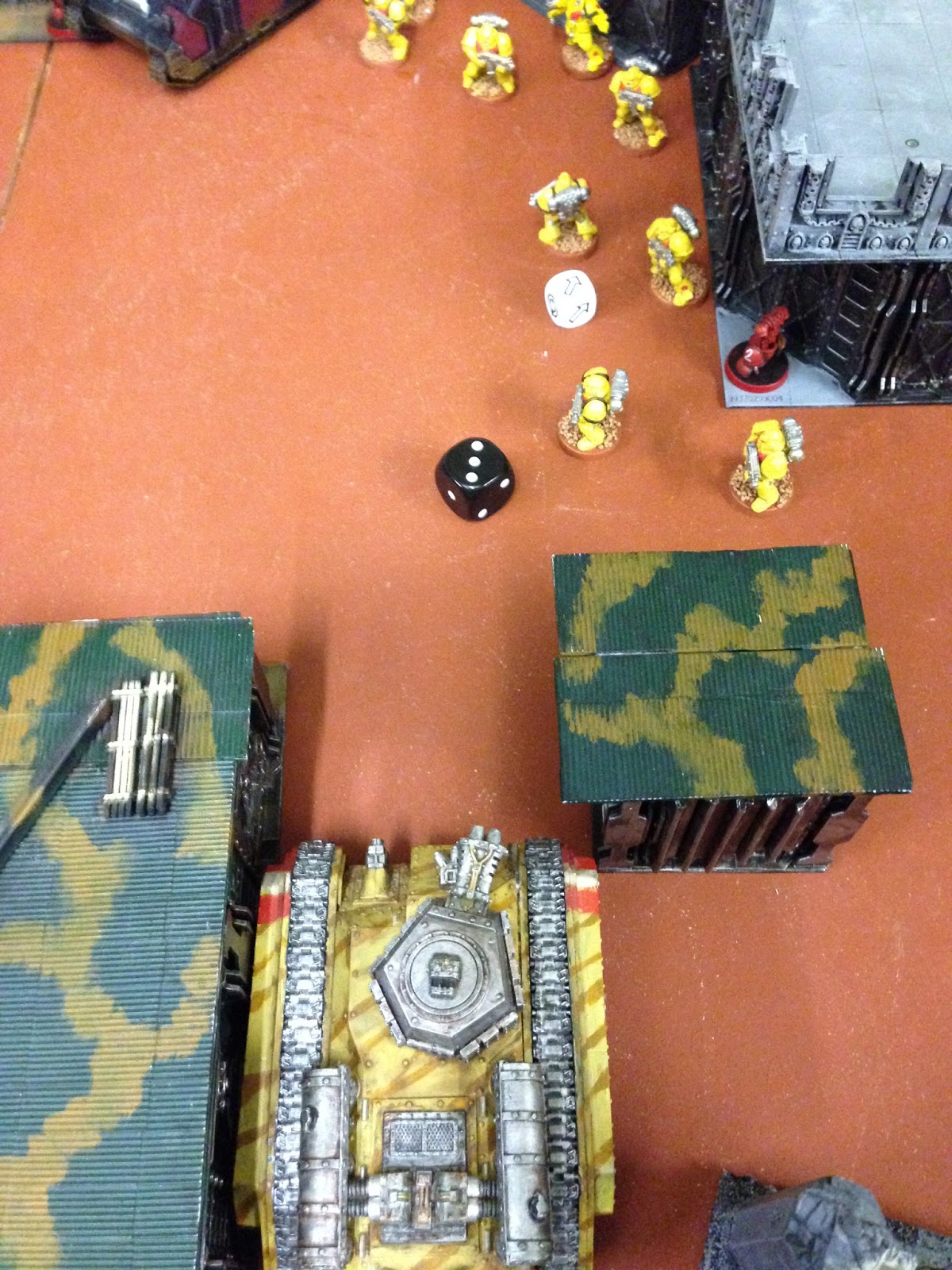 The Hellhound thanks the Imperial Fists for getting into such a convenient straight line for him. 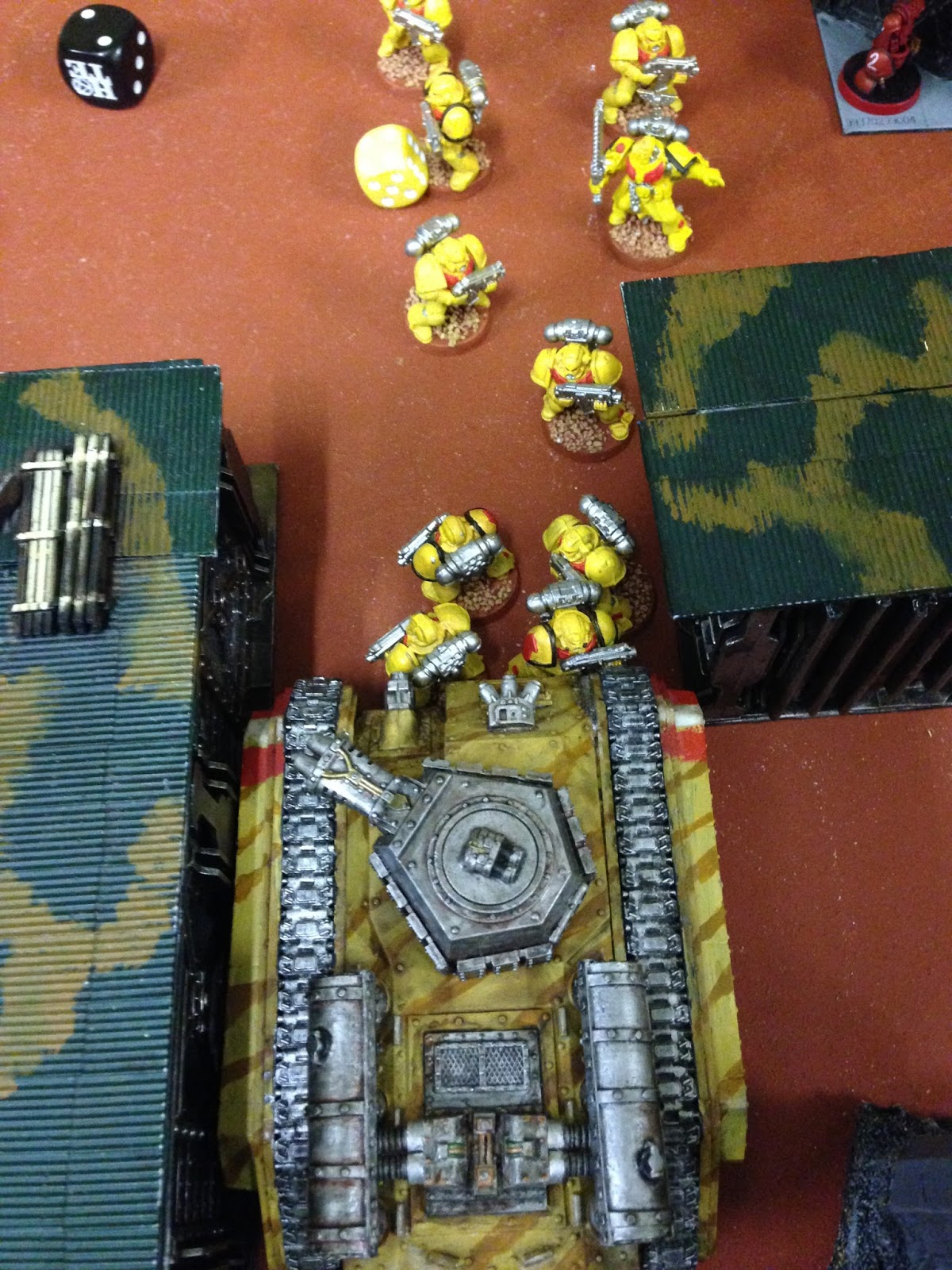 And the Imperial Fists kindly offer to return the generosity with as many krak grenades as they can manage. 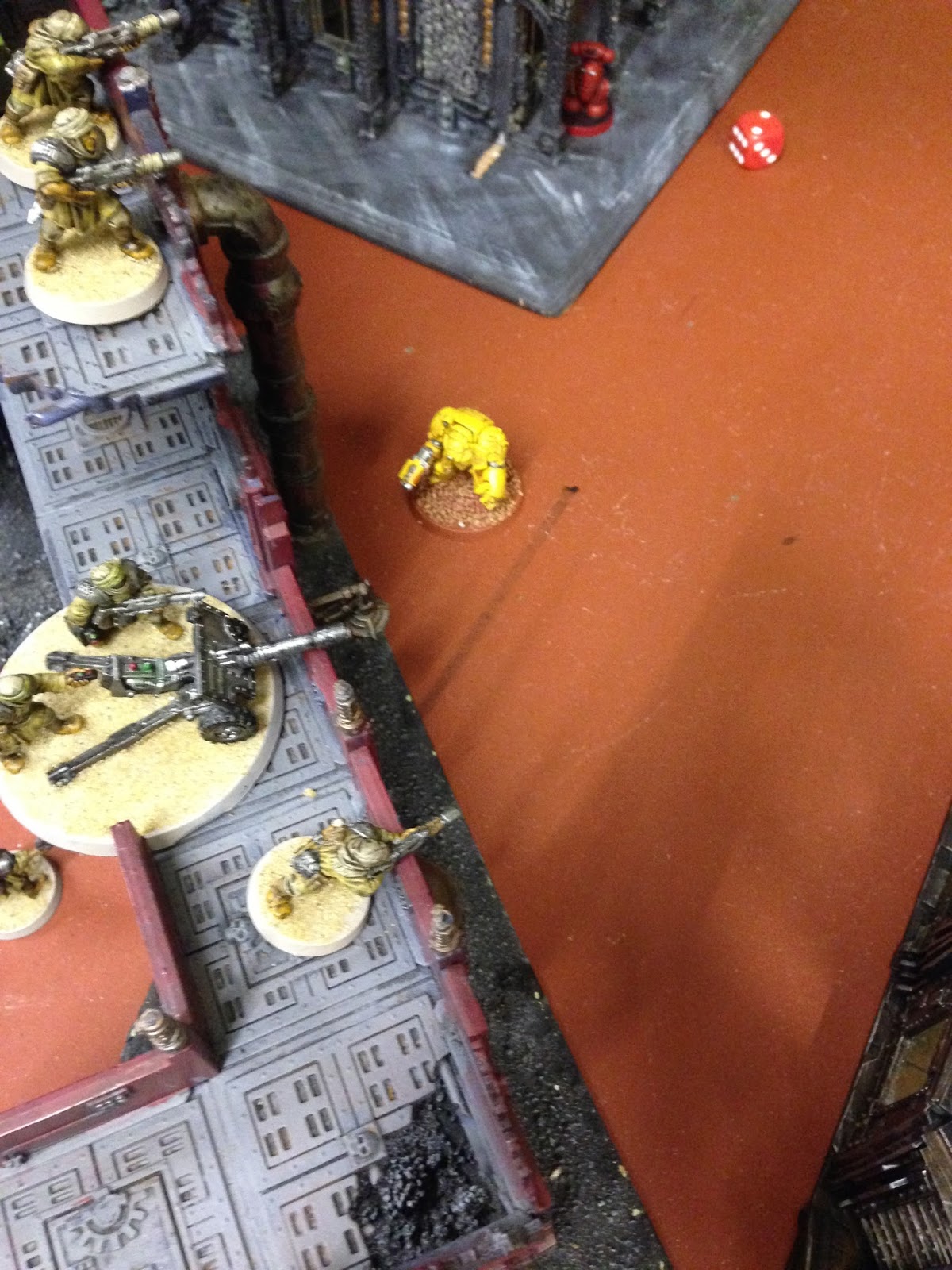 The sole survivor of the Terminators bears down on the guardsmen in the ruins, but it's not going to be enough... 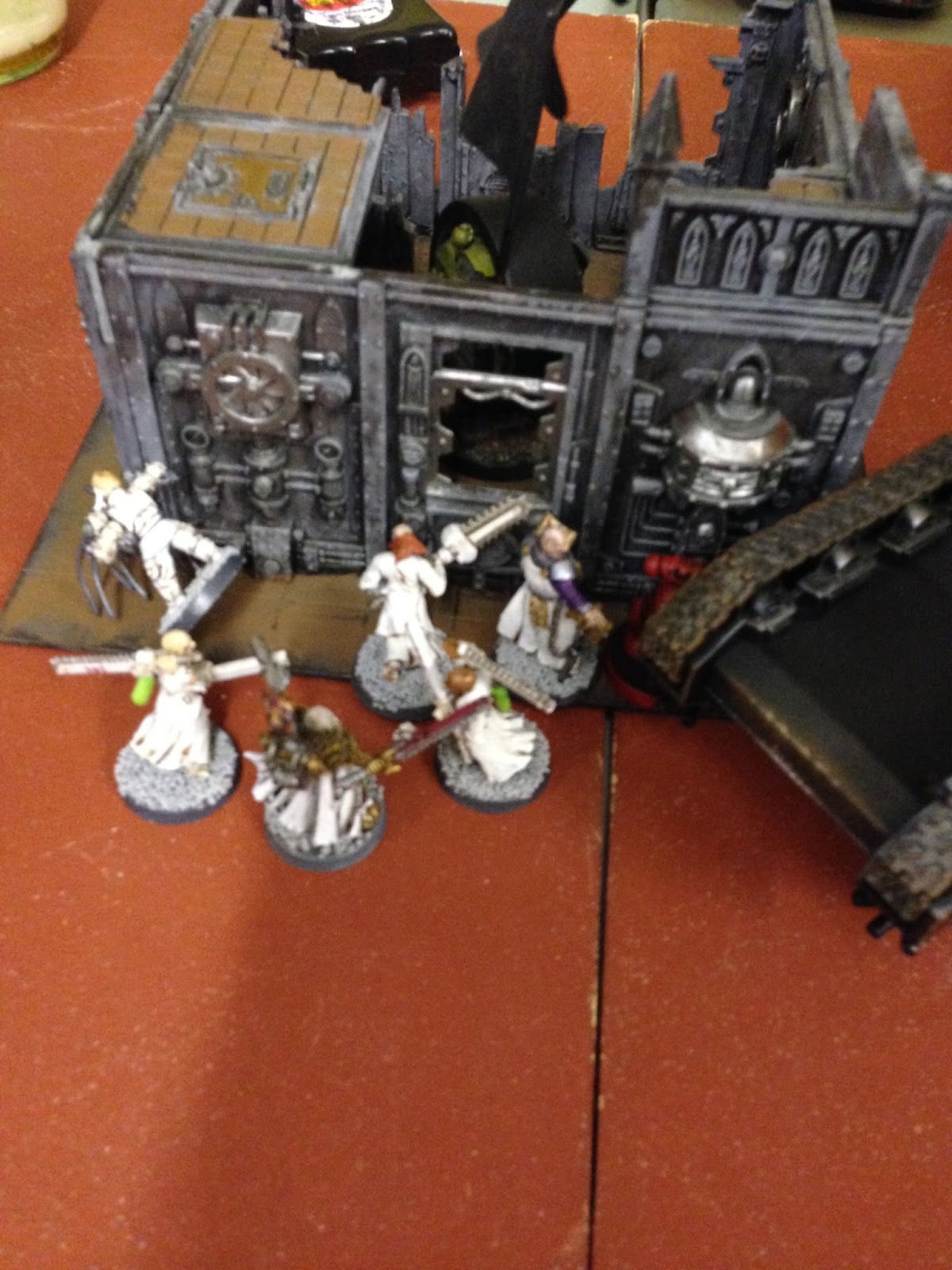 The Inquisitor and Canoness fall back to hold an objective. 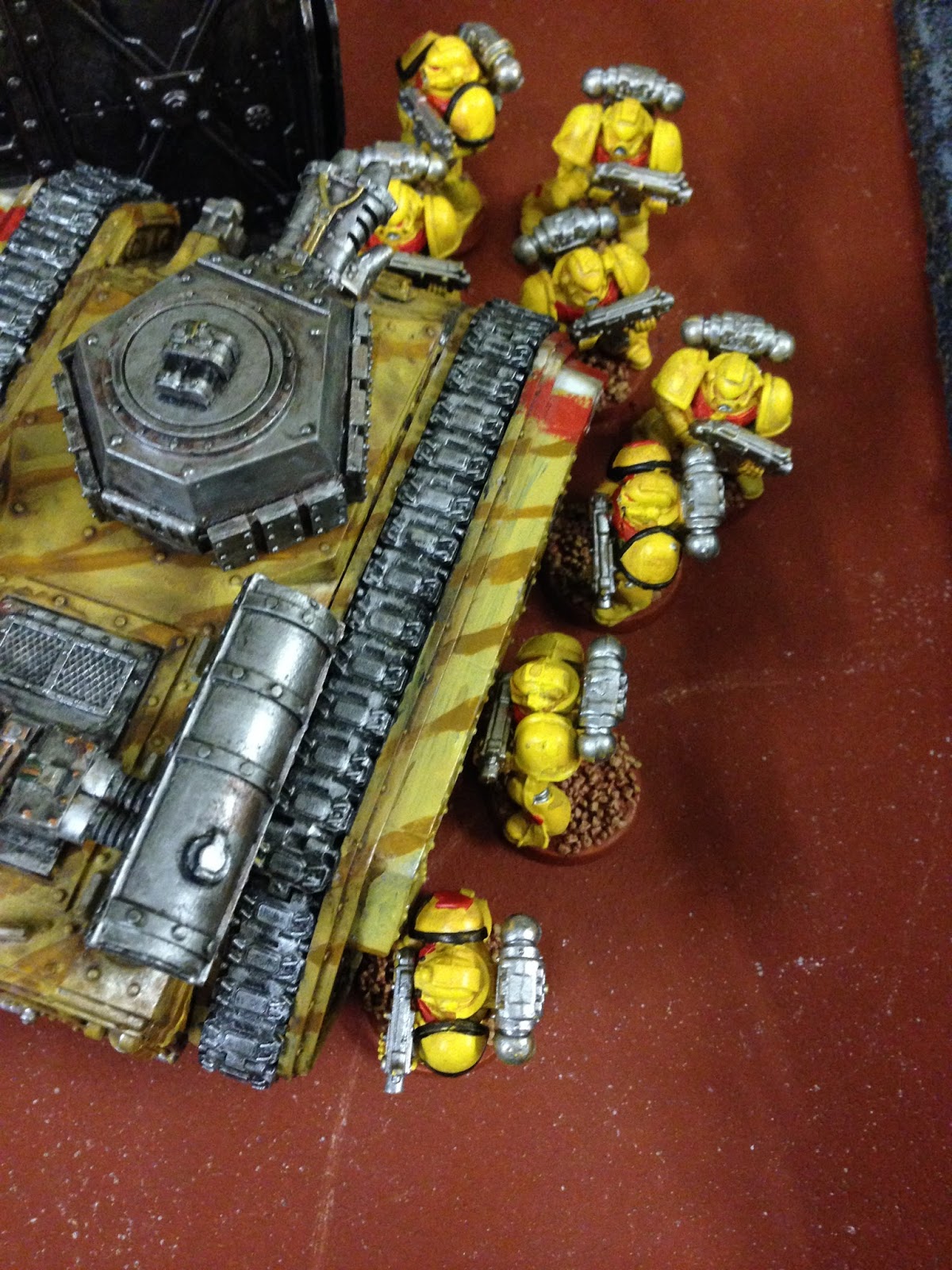 Argh! Get them off, get them off! The Hellhound has definitely attracted a lot of affection for its shenanigans with Torrent. 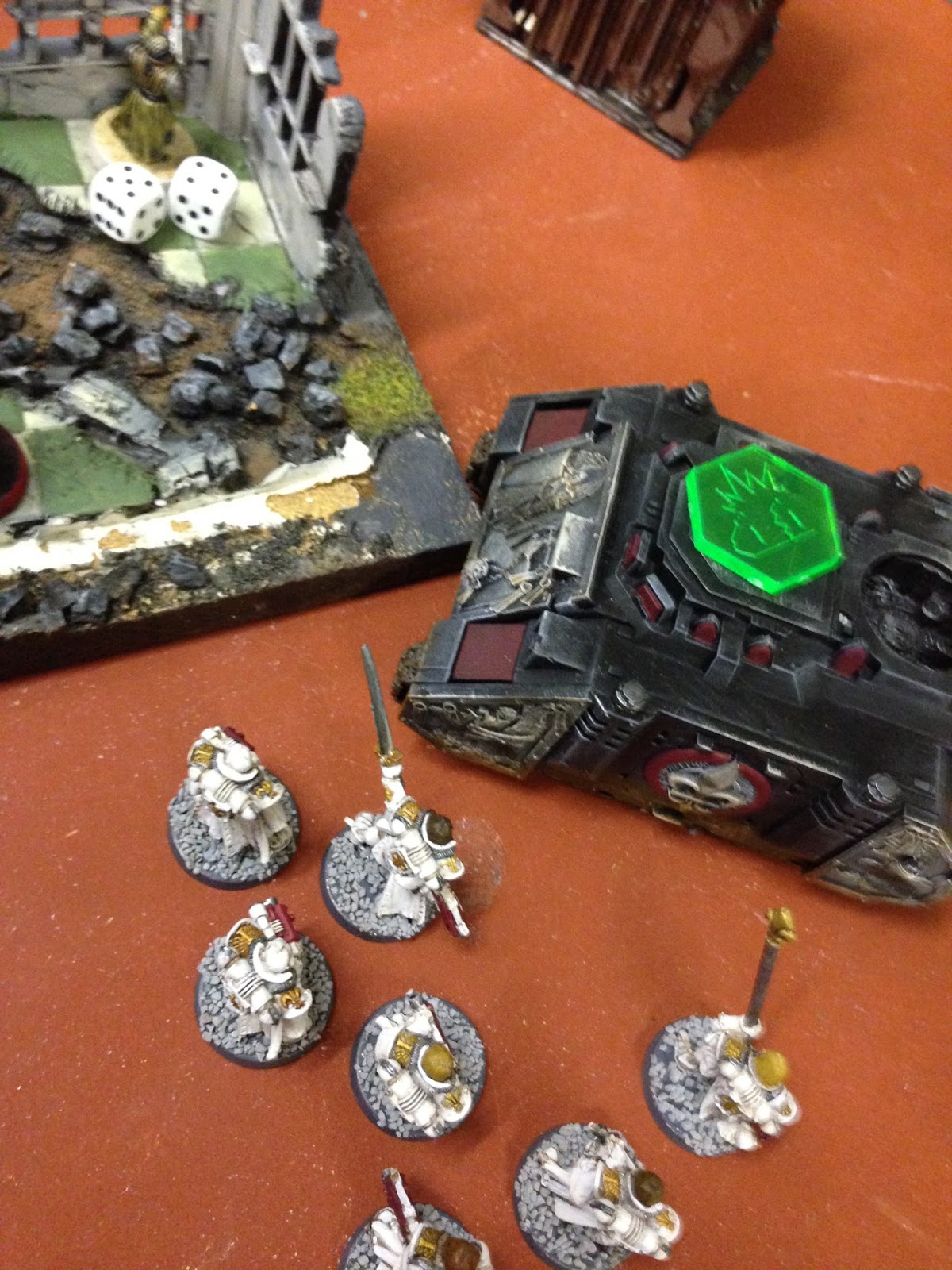 The Sisters take out the Veterans, but with their Rhino destroyed, it's too late for them to affect another part of the battlefield.

At this point, the battle ended, with a close game - we managed to hold onto victory with a single victory point, with a Linebreaker swaying it. It turned out that the Naughty forces had managed to be victorious in the day's campaign, making things even less comfortable for the surviving Imperial inhabitants of the Pakeshi sector...
Posted by The Responsible One at 15:37