Welcome to another episode of "The Responsible One tries to remember what happened months ago from photos and incomplete notes".  This week, we're looking at a game of Seize the Antennas in the HATE Infinity League against those delightful folks from the US Ariadna Sectorial. 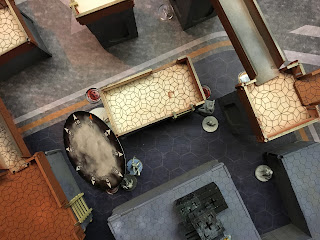 At the time, I only owned the models for a defensive moderator link, so decided to give a link-less Sectorial list a go. I took advantage of Bakunin's availability for Zeroes and Sin Eaters, creating a crowded camo midfield with some brutal reactive turn fire lanes.

I still hadn't quite gotten the hang of Morlocks at this point, so quite a few of them died due to poor placement and running out into gun lanes. 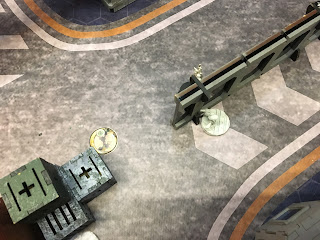 Pi-Well did OK at running up into the midfield and using Sensor to identify a whole bunch of the obligatory Foxtrots. For those who don't play Infinity - both armies took a whole bunch of infiltrating models who start the game represented as camouflage tokens, meaning the first part of this game was like a massive game of sub-hunt. Fortunately, I'd invested in a dinky little robot who is 90% scanning equipment and he proved a collossal PITA. 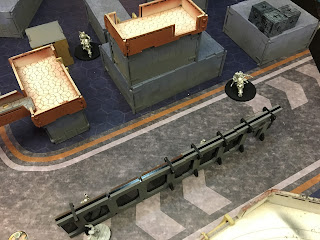 One of the banes of this game were the Mavericks. Bikes with light smoke grenade launchers are really rather good and smoke ended up all over the place. 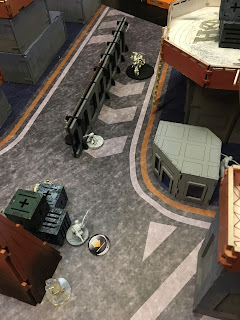 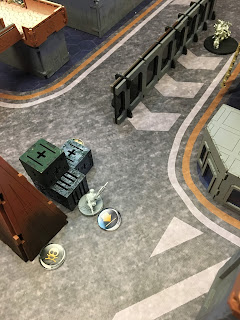 One of the edges I had I didn't quite manage to capitalise on is that I can take Minelayers - models who can have mines set up under camo tokens at the start of the game. At this point, Pi-Well has been shot in the back by a bike, and my opponent has discovered that the central objective is mine as well as crawling with infiltrating troops from both sides... 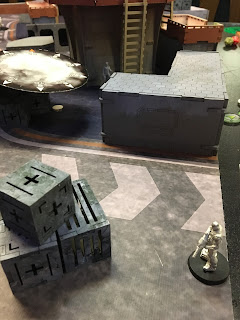 My other big worry for the game had been the special character "Van Zant" - a specialist drop troop who unlike any other drop trooper can walk on the table edge in your deployment zone. 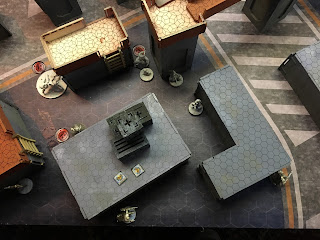 To counter this, I had two "Sin-Eater" - religious fanatics whose nervous systems are re-wired to be hair trigger - letting them use their guns to full effect in the reactive turn, rather than just getting a single shot. This was super effective and Van Zant was a fine red paste without causing any real damage.

You can also see my main problem here -  I was pinned down in this small set of buildings, with long ranged weapons covering my exits. With my smoke dead, I couldn't win a long ranged firefight with the snipers covering the exits. 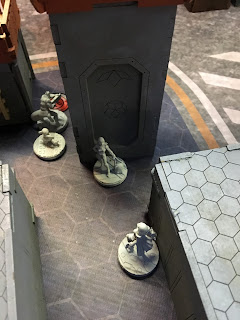 My lesson here was that the Sin Eaters are great in the reactive turn, but they can't proactively hunt down a target - and you need one or two good shots with long ranged weapons to have a chance in those long ranged firefights to avoid getting pinned down and stuck.

With nothing but medium and short ranged assault weapons, a lot of my points were stuck in my deployment zone, unable to help my lightly armed infiltrators in the midfield. 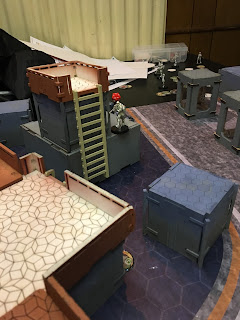 Here, an Ariadnan rifleman picks off Nomads trying to get close to the central antenna. 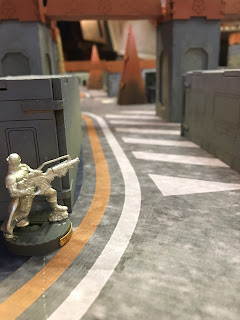 Meanwhile, the Sin Eater HMG is able to block off the best approach to the central Antenna, but is only able to delay them.


The end result of the game is a 3-6 loss for me. I still had my Antenna, but my opponent had their own and the central one. I didn't have enough long range units or alternative solutions to deal with snipers, and insufficient combat punch to push up the field and deal with the low tech, but tough and punchy Ariadna Rangers.