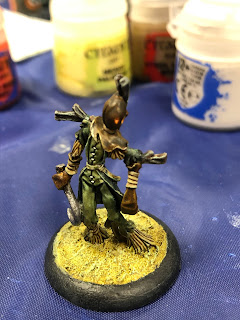 So, February is over and it's time to take stock of how my painting has gone.  This last weekend, I didn't get any hobby related stuff done on 29 February, as it ended up being a housework day. I did some assembly on the Sunday though, so I've included that at the bottom of this post as a bonus.


I got three figures painted this month, plus completing three other small "projects", two of which I'm counting as a figure painted given the effort and stress I went through to get them sorted out. That brings me up to six miniatures painted this year. February's painting was "on track" for the number of things I'm wanting to get done, though I'm still a little behind from January. 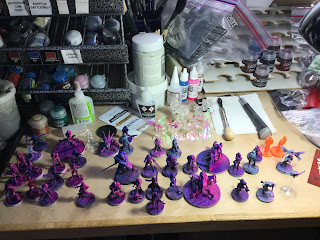 I managed to finish sorting all my Infinity figures for the EIC in time, which was a massive relief. Of course, a couple got chipped and one of the repairs got broken again in my last game of the tournament. Because that's how I roll. As this was fixing up already finished models, I've not counted this as any figures "painted". 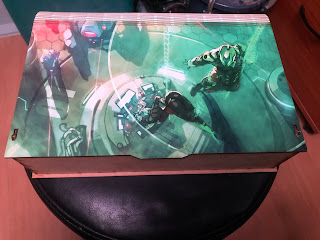 I am, however, counting assembling my Bandua Token Case and my order board by Antenocitis Workshop. Both have been mildly vexing me by resolutely Not Getting Done for ages. It's a massive weight off my shoulders that they're done and in use now, so each got counted as one figure painted. 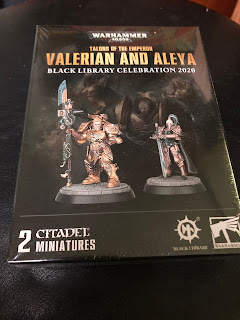 All good intentions were, however, shattered, by the arrival of these two. When I ordered them I expected to fall into an eight week backlogged order queue, which would have allowed me to get a couple of miniatures painted. I've also decided to paint the White Dwarf Tech Priest for gaming, so he'll be separate from his servitor, making them two models not one.

So, three models bought more than I've painted - I'd better get a bit more done soon! 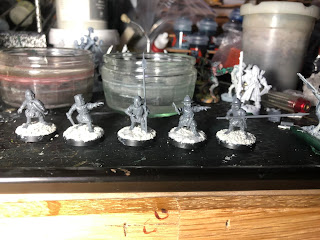 By the time I'd finished all the post holiday tidying and cleaning, I was a bit shattered to do any painting, but I sat down and got the Wargames Atlantic Halflings assembled. They're pretty good gaming quality miniatures, but there's a few spots where the detail is a bit flat, and some of the mould lines are a bit much.

I also think that while there's a good selection of weapons on the sprue, there's not enough to make a every model with the same equipment. For each set of five halflings you only get two of each weapon. There's still a ton of head options, though.

Still, they're fun little sculpts and I'm looking forward to getting some paint on them.
Posted by The Responsible One at 19:00