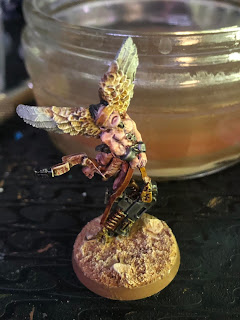 While March isn't quite over, I've got a blog post to write this evening and have signed up to a Warhammer Fantasy Roleplay game over the internet on Tuesday nights, so I may as well cover off my painting progress for the month now.

I've finished an Inquisitorial cherub I'd been planning on taking to Purge the Pit before I cancelled out that I'd decided was a shame not to get painted. It's a mix of contrast and more traditional paints, an I really like how it came out. I'm trying to experiment a bit with my side projects, and that's paid off here. 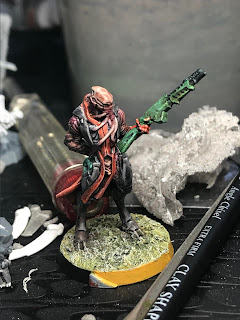 The Shasvastii mentor is nearly done. I didn't wipe off quite enough Typhus Corrosion on the legs, but he'll live. The base rim just needs finishing up and he'll be properly finished. I can then get onto the rest of Operation Wildfire. Once he's done I'm more than halfway through the Shasvastii! 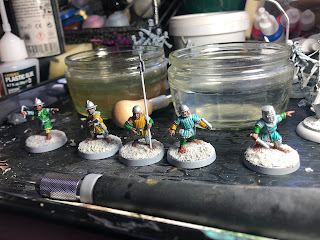 I've also started getting the base coats down on the Wargames Atlantic Halflings. I'm trying to paint in some lighter colours due to mis-hearing some advice from my wife about painting lighter. (She was actually trying to get me to put more light to dark contrast in, and thinks too much of what I do is close to the mid-tone.) 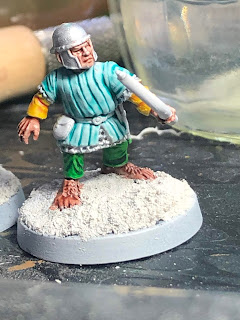 They're lovely, relatively simple sculpts who'll look fine in large numbers. I used Fyreslayer Flesh on the skin and I'm . . . not sure what it's supposed to do? I can't find a skin tutorial that uses it (ironically, the one on the Citadel Paint App for Fyreslayers suggests Guilliman Flesh). It behaves and looks very different when painted on thinly and thickly. 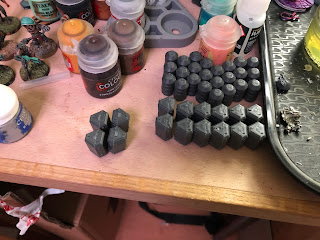 I've also nearly finished the mould line cleaning for the scatter terrain for HATE. There's only two left to go. So close!

My "light" breaking of the "don't buy more than you paint" rule last month was shattered by a combination of a "damaged box" Infinity sale and picking up the Skaven army box before it went out of stock. Now it's about to trying to catch back up.

Email ThisBlogThis!Share to TwitterShare to FacebookShare to Pinterest
Labels: Infinity, Inquisition, Painting, Shasvastii, This week, to do