Eyes on the prize 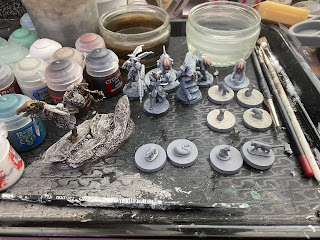 It's been a quiet weekend for hobby progress. I had an exam for a work qualification on Saturday, followed by one of my regular D&D games. Sunday was then mostly getting stuff done around the flat so it was tidier.
That said, I did manage to get a few bits done - some paint on the Shasvastii, getting more of the Diehard Miniatures skeletal centaur done, and the basing paste for a variety of models I got back from one of my assembly team the other week. 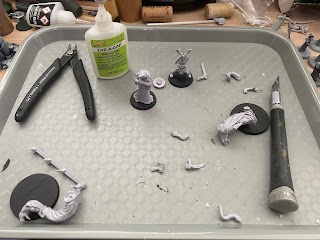 I've also got a few bits of assembly work ongoing. There's a lovely set of resin sculpts by Fenris Games on the work bench at the moment. I've been wanting one of the snakemen forever and he just got re-released in a set of three. I've also got a Forge of Ice warrior duke. The latter is a limited run, so if you want him, you should probably order now.
Now is also a good time to order from Fenris as Ian's beloved hound has needed an operation, which is not cheap. Have a bit of a browse and grab a few bits if you can. 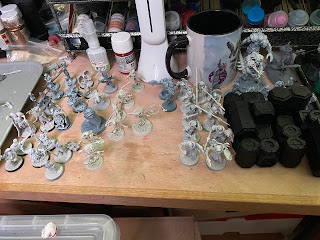 I'm weirdly kind of glad I didn't finish a model this week. I could have focussed all my available hobby time on a single model and got something ready in time for the blog, but then I wouldn't have got as much time in on the stuff I want to finish this month. I'm managing my time better and focussing on what I want to be doing.
The experiment I said I'd run until the end of March of assembling models within a month of getting them has had some partial success. It's made me slow my purchases a bit, but the amount of half assembled things cluttering the hobby area has reached silly proportions. I'll keep going for the rest of the month, but I'm considering then moving over to "no new purchases until all the half finished assembly stuff is finished"...
Posted by The Responsible One at 19:00