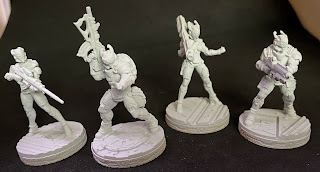 The last of last year's farmed out model assembly! Corvus Belli are now semi regularly discontinuing older ranges when they bring out new models to keep the number of models they produce under control. One of the recent lines to be affected by this were the Neoterra Bolts. 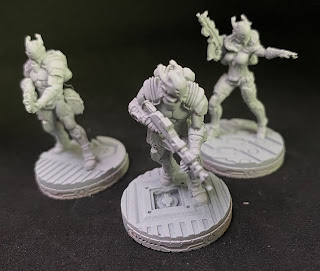 As a result, I ended up picking them up for when I do the Foreign Company mercenary force, which I'm planning on doing in the future. I don't have plans to paint them any time soon, but I had them assembled and undercoated so they'd fit more easily into a storage case. 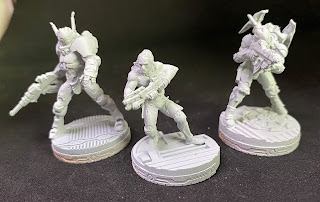 The ORC Trooper on the left and the Akali Commando on the right were from a now out of production starter that I also grabbed so they could do some work in the Foreign Company. In the middle is an out of production Croc Man I found lying around in Dark Sphere when you could just browse the shelves.
I wrote this in December 2020. Are we allowed on the streets again yet? Was there a before time when we went outside? 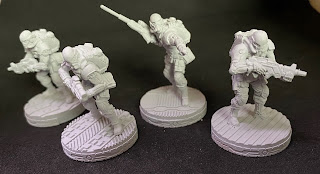 And finally, the Kaplan Tactical Services, of which I have several versions for different paint schemes - for Qapu Khalqi, for White Company and for Foreign Company. Each of which have different paint schemes, because I am not smart and don't think ahead.
It's December. I don't know what I'll be doing by March. I wonder what Infinity stuff I'll be painting by then? I'll have probably changed my mind three times between now and when this publishes.
Posted by The Responsible One at 19:00

Email ThisBlogThis!Share to TwitterShare to FacebookShare to Pinterest
Labels: Infinity, Painting, to do