Reviewing February, looking forward to March and thinking about life

Starting off on a high note - the Battlemasters Chaos Archers are finished. As a club project, I'm not the last one to finish - I have finished, and they've been returned to the person co-ordinating the project to get a unified basing with everyone else's projects. 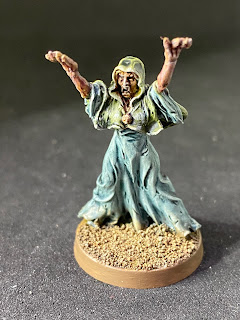 I also got a handful of individual models done this month. I'm a little unhappy with the quality on the Banshee and the Guards, but am very pleased with Hooty. A lot of this came down to a steadily growing disquiet with the amount of clutter in the hobby area. Too many "work in progress" projects sitting around has been deeply unhelpful.
I realised that having so much Stuff around takes time in and of itself. Tidying things, moving things around, trying to find things - its all time consuming. And it takes away from fun hobby time. Planning a project is definitely fun, but sorting out a never-ending pile of minis is not. I am wondering a little if the latest "sort" is causing a turning of the tide with regards my acceptance that more things need to get cleared out. 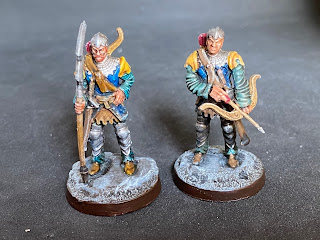 And another "are they worth it" problem are the Wizkids models. The quality just . . . isn't great, and while I can slap on some wash, a quick highlight and call them done, I am left a bit down about everything else. I mean, take these two. Pleased with: the contrast on the face of beardy guy. Unhappy with: everything else. I spent so much time cleaning up mould lines and problem areas that I could be spending, you know, painting a model? It's a similar problem to the Bones models, and Bones Black is such a step up in terms of quality, I'm already considering a bit of a purge. 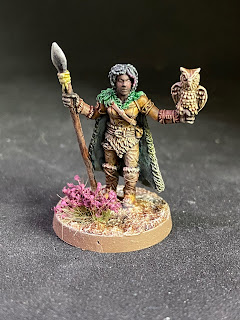 That said, there's clearly stuff I am loving. Bad Squiddo stuff continues to be an absolute joy to paint, and with the assembly out-sourced, I've got a system I'm happy with.
Assembly-wise, I managed to get of most of what I got in January assembled, except the two Malifaux figures and Blackstone Fortress. 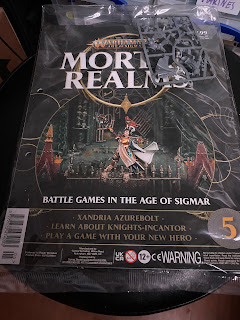 Looking forward, aside contemplating another clear out, I'm going to take another pass at assembling what I got this month. Starting off with this Mortal Realms magazine - it's a limited edition figure and I spotted that Forbidden Planet had a few left. 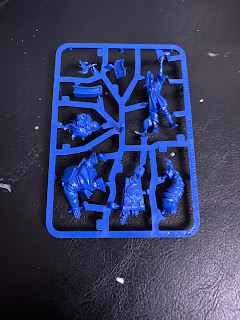 Ordered as a nice small project, I picked up the two referees from the new Blood Bowl box from eBay, as I don't need the whole box. I just noticed they didn't come with bases, so I need to work out what size they go on. 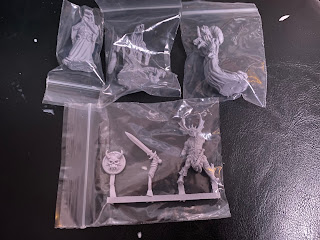 I also picked up these four models from Fenris. There's also a handful of metals from the same order that I'm not committing to, because I farm those out. The snake man on the left I have been meaning to get for years since I saw him at a Salute when he was already sold out. I spotted him available again with two friends, and snapped him up.
The other model is a limited edition Forge of Ice model I really liked the look of and decided to add to the order. 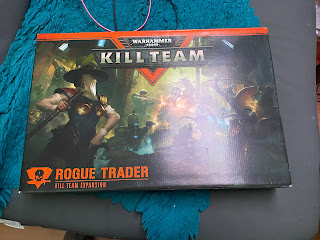 And finally, the big one. I got a tip off about Kill Team Rogue Trader, out of print for a good long while now, being available at list price from a retailer. The info was good and it turned up fine. Well, missing a couple of bases, but as those aren't out of print and I'm planning on using sculpted bases for the set, I don't even remember if I mailed GW Customer Service about it in the end.
Being sensible, I may not get to Rogue Trader this month. I washed a huge batch of resin in January and a ton of it is still sitting around unassembled. I'm also part way through the Mortal Realms magazine Stormcast.
So, the idea is to get the refs and the Fenris stuff done, along with the Mortal Realms magazines past and present and all this half started resin nonsense. There's an old Mortal Realms magazine I got ages ago with another order I might dig out and add as a stretch goal if that doesn't drive me up the wall.
Painting wise - it's Shasvastii time! The bugs have been patient, but it's been too long since I got one finished, and getting stuck in to one of my projects, rather than helping on a group one, is something I'm super keen to do.
Posted by The Responsible One at 19:00

Email ThisBlogThis!Share to TwitterShare to FacebookShare to Pinterest
Labels: Painting, Speculation, to do