Friday Fad: My Love of the Ranger Class in D&D

I promise this isn't just a long talk about my character.
I've been playing in a D&D campaign run by Rolldark after deciding to join it for an arc on a whim. I had an idea for a well meaning fairy tale protagonist, using the Fey Wanderer subclass of the Ranger, and as I developed the idea (as this arc was starting at 5th level) I ended up giving him two levels of Warlock due to a bargain with an Archfey, because riddle contests with ancient beings pretending to be a little old lady are fundamentally cool.
Anyway, while having a look at "what I could have won" if I'd just played a single class Ranger, I found myself thinking about how much I like the updated Ranger. This is a bit weird for me, because my two 'go to' takes in D&D are usually either very social, very academic / investigative or a mix of the two. The Ranger is usually a fighting type who is more at home in the wilds rather than populated areas, and rarely has strong academic skills. I had some thoughts about why I liked it so much, and they were interesting enough to me that I wanted to write them down.
You may find them very boring. If so, I'm sorry.
The Ranger in the 5th Edition Player's Handbook suffered from two big problems. Firstly, there was a general balance issue that it just wasn't quite as good as the other classes. Secondly, the core class features were situational. For those of you who don't play D&D, the two core abilities of a first level ranger are the ability to be better against certain "common" types of enemy, and to be really good at travelling in a nominated type of terrain.
But what if you don't meet those monsters, or travel through that terrain? More than half of the "really good at travelling" things are removing penalties and difficulties that your DM is likely to gloss over in a heroic campaign that doesn't have much interest in book keeping. If no-one in the party is interested in playing one, will the DM really penalise the party for not having a Ranger? 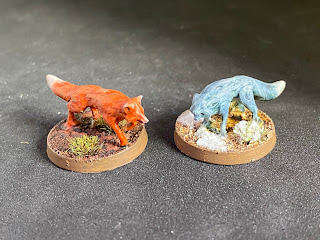 For the original Ranger to work, character creation needs to be a collaborative exercise between the DM and the player. The DM needs to guide the player to which choices of favoured enemy will have an effect on the game world, and which would be an interesting background point that is unlikely to come up mechanically in play.
Wizards of the Coast addressed this in their recent book Tasha's Cauldron of Everything, which was in many ways a patch to the core book to add new options and rebalance some things. Rangers got the option to swap out the two abilities for an ability to increase their damage against a single monster, and an ability to be extra good at one of their skills.
In both cases, though, a DM should realise that when their players build a character, they're signalling what they want to look cool doing. It's easy enough if you're dealing with a fire wizard, or a heavily armoured tough fighter - they want to blow up baddies, or be super tough holding off a scary monster. Those signals are met by default by the core mechanics of the game.
When a party faces a trap, they turn to the Rogue and look to them to work on disarming and solving it. That's the Rogue's non combat "cool moment". In a similar way, the Rangers get their cool moment when the party are stuck on an inhospitable mountain and the Ranger has avoided a rockfall, found them a sheltered spot to camp and managed to find some game so they have something to eat other than trail rations. If you gloss over the opportunity for the cool moment, then when does the ranger get to have the cool moment?
So, Rangers are cool too. When travelling and exploring, they can make a party's life easier, sometimes in ways the other players might not have even thought of until it happens. Sure, in a city campaign, you're going to be playing them as a fish out of water, but if you generate a noble wizard with no practical skills, you'll be doing the exact same thing in a campaign set in the wilderness.
As a total city boy with minimal practical skills, I have a lot of respect for those who know what they're doing in rural environments. And playing a Ranger, I can have cool moments where things that a Ranger is good at come up and they get to be awesome in little helpful ways. And, perhaps, I can show some other players that Rangers get to be cool too, and maybe they'll play a Ranger one day.

Posted by The Responsible One at 17:00

Email ThisBlogThis!Share to TwitterShare to FacebookShare to Pinterest
Labels: D&D