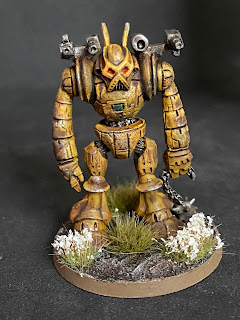 I picked this robot up in a Facebook trade ages back. I believe the sculpt is by Drew Williams. It was available for a short time on the "Troll Soup" shop, although sadly no longer. 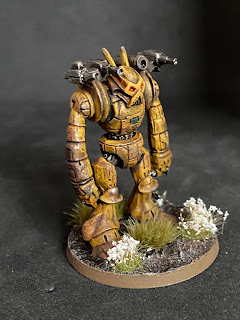 I painted it up using yellow contrast paint, then dry brushed a lighter yellow over the top, before using sponge weathering and Typhus Corrosion to grime it up. I think I overdid the sponge weathering a little, but after a bit of tidying up, I'm OK with how it turned out. 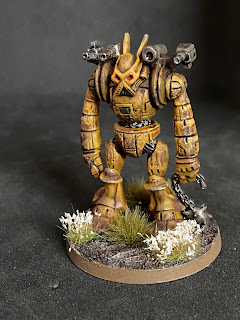 He'll end up seeing service in Stargrave games when I get around to those. But for now, it's the 50th miniature I've finished painting this year. Not quite as many as I wanted to be done by this point of the year, but still plenty. It's going to be a challenge to get more done than last year now, as last year's total was 78.
Posted by The Responsible One at 19:00