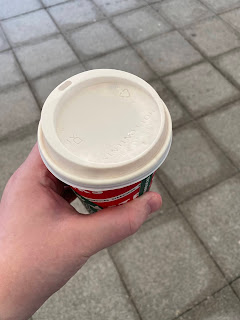 After all the problems of the past couple of years, I was a little apprehensive going into Salute this past weekend. We met up with some friends the night before for the first time since the pandemic, and it felt remarkably close to normal. After some ill considered life choices regarding staying up to late and nearly missing the last DLR home, the joy of finally meeting people again after so long was drowning out the anxiety.
My beloved wife had been volunteered to help with some stand set up so vanished off at some ungodly hour. I crawled out of bed, had my cereal and a huge mug of tea, and headed over to the show a bit later than planned, doubly so when I went via Starbucks to ensure my dearly beloved was at a safe caffeination level.
I didn't take any general photos of the show itself. It was, unsurprisingly, rather quieter than usual - both with fewer exhibitors in attendance and fewer attendees. Apparently there wasn't as much of a rush at the start as usual, and it seemed like a lot of people were dropping in throughout the day. I think it was pretty variable for the traders, too - some seemed to do pretty well, others didn't. 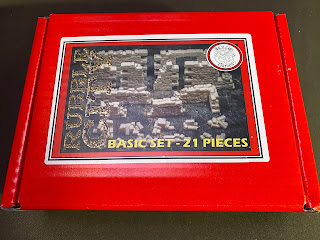 I picked up a Rubble City set from Fenris Games. These are some very generic stone walls that could be used for anything from the Bronze Age all the way through to modern day. With limited space at home I thought they'd be super good as terrain options for all sorts of games. I also might look at using them for photo backgrounds once they're painted up. 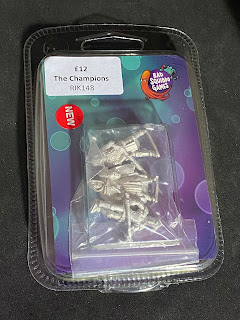 I also grabbed some new models that Bad Squiddo had as a pre-release at the show. They don't have painted pictures on the packaging just yet, so this is the best photo I could manage for now. 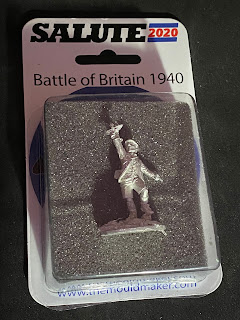 As always, there was a show miniature (still packaged as the 2020 show mini, calling back to original, cancelled plans). I often sell on show models I'm not interested in, but I really rather like this boy playing with a toy plane and am tempted to paint him up. 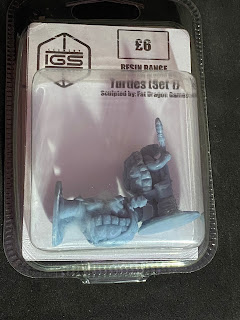 I ended up focusing a lot of my buying onto people who were new to Salute, or at least to me. First up was Iron Gate Scenery, who print a wide range of 3D models, both of their own designs and other, licensed properties. I was really tempted by their scenery ranges, but in the end went for a couple of turtle adventurer types who will work well as Tortles in Dungeons and Dragons. 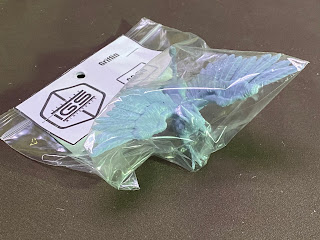 I also picked up this lovely Griffin model, again for future D&D purposes. I'm not sure who the digital sculpt is by, as there's nothing on the packaging and it's not on Iron Gate's website yet. 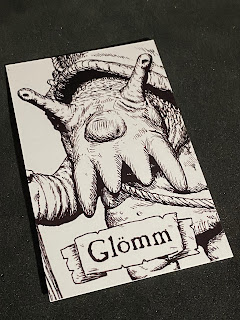 I've been meaning to get Glomm from Monkstone Miniatures since he came out. He's a snail man merchant who makes a guest appearance in Forbidden Psalm, the Mork Borg skirmish game. 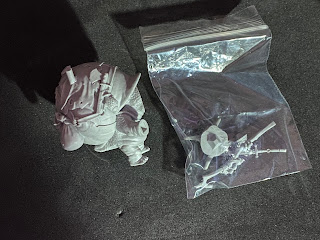 There's a bit of assembly that will need doing on him, but he's a gorgeous sculpt I'm really looking forward to getting to paint. I was also really tempted to get one of Monkstone's pig warriors, but I was trying to stay on budget and decided to spread the funds around a little wider instead. Once Glomm is done, I'll definitely be back to get one! 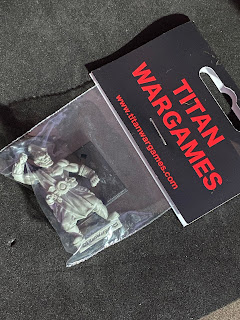 Next up was Titan Wargames, where I picked up a couple of orc miniatures. Their orc monk is apparently based on a previous character of the owner / sculptor. For me, though, I feel like an orc monk is something I'd very much expect to see in Eberron, so I had to pick him up. 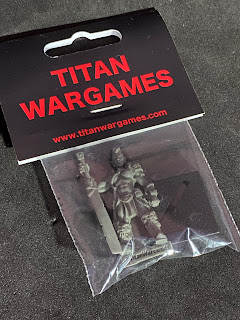 Titan also produce this lovely orc champion, who could work well as a D&D barbarian or Frostgrave fighter of some kind. As they were a bit smaller than Glomm, I decided I could get away with getting both! 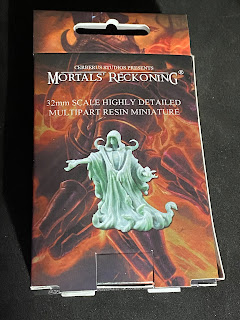 The Cerberus Studios stall had a range of deeply pretty resin miniatures, ranging from character models to some larger models. They have ranges linked by a narrative - I'm not sure if they're intending to make a game in future or not. I picked up this "Emissary" to use as a villain in things like Frostgrave and D&D. I think there's some fun concepts to be had in home brewing villains based on a cool miniature you found. 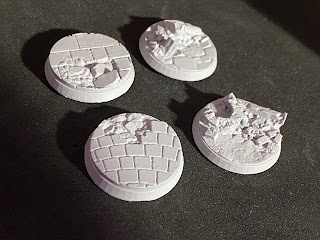 Cerberus also produce some beautifully crisp resin bases, and I grabbed a blister of them to throw some of my fancier character models onto. 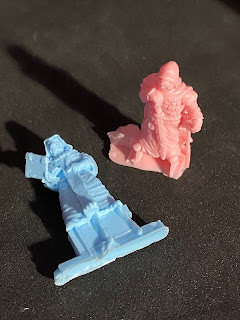 Two of the many grim-dark skirmish games that have sprung up recently are Brutal Quest and Planet 28. Their creator, Mammoth Miniatures, also 3D prints an assortment of interesting sculpts to go with that kind of aesthetic. I picked up a couple of interesting looking models to try out. I also really like their Mercenary Ogre, but he was out of stock by the time I made it around to the stall. These will have to do for now . . . 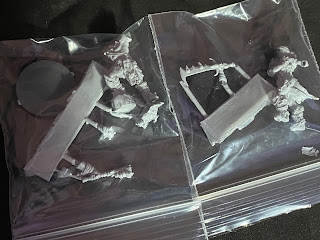 Goya Games are planning on launching a game in the future, but for now had a small stand selling a handful of models. I picked up an orc and human barbarian, and am interested to see what they come up with in the future. 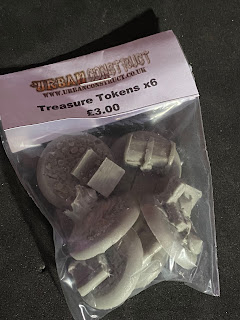 Urban Construct have been Salute regulars for years and I've never quite worked out what to get from them. While I was waiting for a man from the Star Trek convention next door to finish his digital marketing pitch to the slightly bemused stall holders next to them, I spotted some lovely treasure tokens at a bargain price. 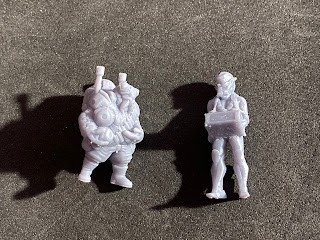 I then got to the stall I'd been aiming for, which was Tangent Miniatures. Another one of the new crop for this year, and again, focussing on the 3D printing. They had a lot of models based on old TV shows, which isn't really my thing, but had a license to print Novus Landing models, who I hadn't seen before and really quite liked. I picked up these two alien traders as I felt they were quite fun. 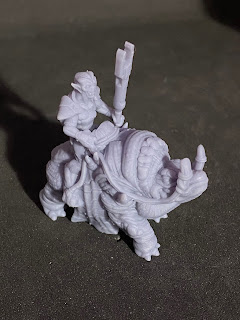 I also picked out this fellow riding a grumpy looking beastie, who I just adore. I sort of want to wuzz it and ask it who's the grumpiest little alien riding beastie. 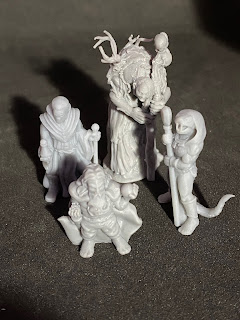 I also grabbed a handful of prints from Encounter Terrain. They're all sculpted by other people but Encounter prints them out. The hag at the back was a little more than the others, and then the other three were super cheap. The detail on those three is much less crisp, but I'll just give them a basic table quality job and that's it. 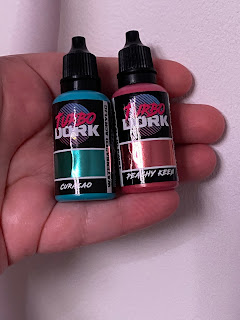 I realised as I was writing this that I'd forgotten to mention Exit 23 Games and Turbo Dork paints. I'd spotted them while doing my first circuit of the show hall, then took my beloved wife over there as I knew they were her kind of thing. She got very excited and bought a lot of paints, and I kind of ended up paying for them . . .
I also grabbed a handful myself to try out. They're all metallics, and some have colour shift effects on them. I have no idea what I'm going to use them on, but it's not like I have a shortage of models . . .
Posted by The Responsible One at 22:07