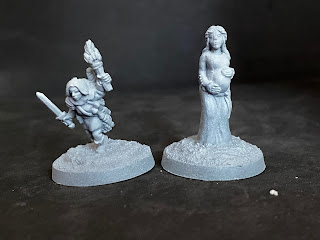 Ages back, I got a bunch of models from Oathsworn Miniatures through their Kickstarter. The concept was to do a bunch of old school style female adventurers, and they really knocked it out of the park.
On the left is a Halfling Rogue. On the right is a pregnant lady who was a freebie with the Kickstarter. 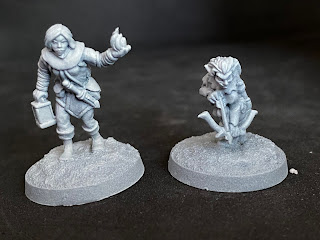 Here's a human magic user and a gnome ranger. The models are relatively "low fantasy" - I can just see them scrabbling to fight kobolds and goblins, with death a real possibility. 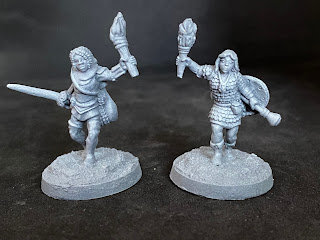 The human bard on the left here is a good example of the low fantasy. She's not got super flashy clothes - she's got practical armour and slightly nicer clothes. Her lute is stowed, her sword is out and she's holding up her torch to see in the dungeon.
She's joined by a human cleric with solid scale armour and a holy symbol visible. She's not very visibly different to a fighter, but you can make out some visual cues to the equipment concepts of early D&D. 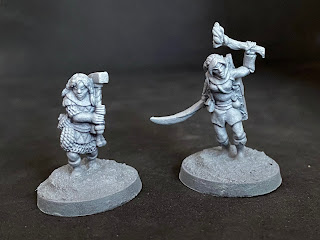 The dwarf fighter looks like she will absolutely mess you up with her warhammer, held two handed - with practical, simple clothes and chain, not ornate warhammer style plate. The elf ranger peers into the dark, scimitar out, but has a short bow ready in case of an emergency . . . 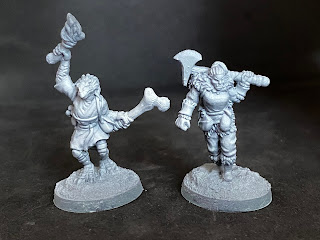 Dragonborn are a much more modern concept, and I'm not sold on the giant bone. She's intended to be a sorcerer, the bone being her sorcerous focus rather than a weapon. Her ragged clothes indicate that maybe her magical talents haven't rewarded her.
Meanwhile, the Half Orc barbarian is wrapped up against the cold and will absolutely mess you up. She doesn't fall into the trap of a barbarian showing all their skin like a lot of classic fantasy illustration. 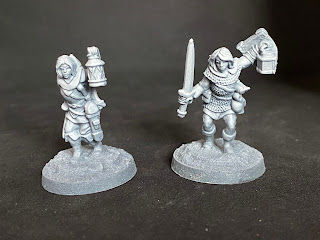 Finally, with have the rogue and the fighter - both holding up lanterns, with the rogue having lighter armour and a shorter sword, while the fighter carries a shield and wears chainmail.
I'm super keen to get a bunch of these painted. They really make me excited to try something in the old school RP style at some point. 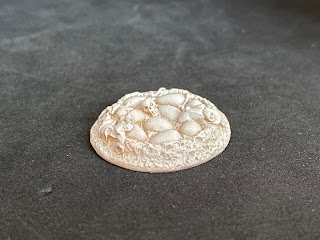 Finally, here's an nest with some eggs that was another Kickstarter add on. I love these smaller Kickstarters where you don't get a ton of models extra, but a couple of little bits as a thank you.
It was advertised as a dragon nest, but I'm not sure if the eggs are a bit too small for a dragon, maybe? Either way, it will get painted up for use as an objective or something to investigate in a dungeon.
Posted by The Responsible One at 19:00

Email ThisBlogThis!Share to TwitterShare to FacebookShare to Pinterest
Labels: Painting, to do