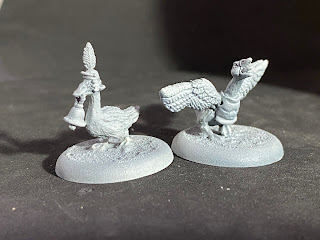 These are the last assortment of models from this batch of metal assembly, and are things I couldn't really fit into any other category. Also, I'd finished assembling a couple of plastic models myself, so included those, too!
First up are these adorable geese by Northumbrian Tin Soldier. They produce a pretty eclectic range of quirky miniatures, and I'm a big fan. These Watch-Geese were something I just had to get and paint, I don't have a particular plan for them. 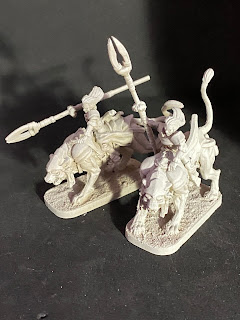 Next up are a couple of Leonx riders from the defunct Runewars game. I picked them up from the Bad Squiddo discount bin. They'll see a use in D&D or similar as big cat mounted elves is a nice unusual look that I don't think many people have done. 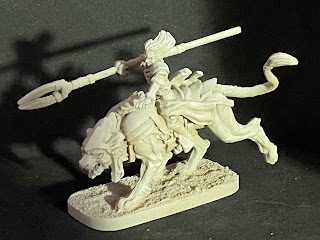 The plastic quality is closer to board game pieces than wargaming models, but they're fine. Particularly for D&D, and being heavily discounted, they should be a fun couple of miniatures. 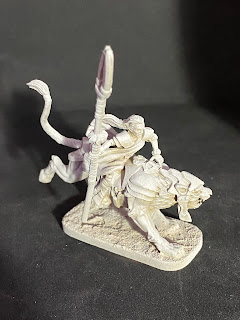 The box they came in had four riders in two different poses. I've assembled two and am going to sell off the other two as I'm not a fan of duplicate poses. They were cheap enough that I don't really mind what I get for their compatriots... 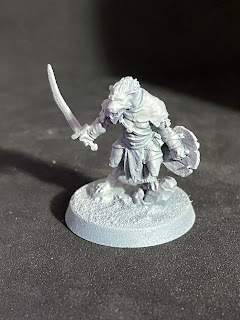 Returning to metal, I'd picked up this Gnoll Chieftan from North Star Miniatures along with some other bits and bobs. I've grown to really like gnolls, both from an aesthetic stand point, and their D&D lore. In most settings, they're horrible fiend worshipping cannibals, which makes them excellent villains.
Meanwhile, in Eberron, a faction of Gnolls called the Znir Pact decided they'd had enough of the violence that being fiend worshippers brought them and swore a pact to accept no more masters, be they fiend or mortal. They work out their fiendish urges through mercenary work, and Keith Baker's Exploring Eberron has a suggestion for them as a PC species. I am really keen on playing one if I can find the right game...
Posted by The Responsible One at 19:00

Email ThisBlogThis!Share to TwitterShare to FacebookShare to Pinterest
Labels: Northumbrian Tin Soldier, Painting, to do