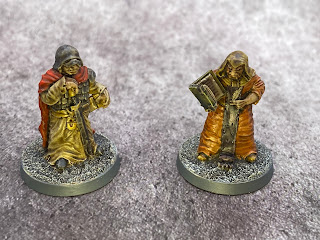 During the evenings, I managed to finish up a couple of models by Mammoth Miniatures. I picked these up at Salute last year. I'm pretty sure this is the first time I've finished painting something I got at Salute within a year of getting it, so I'm definitely taking that as a sign of growth and improvement...
I'd kind of not been counting the treasure tokens I got done in February as I sold those, and I'm intending on keeping these two. I'm feeling really positive about the pace of painting. 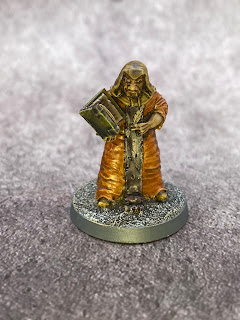 This weird little fellow is described as a Scribe. His face was a little weird, but took contrast paint really well, and I was easily able to dot in some eyes and draw out a few highlights on the skin. The rest of him is a Zandri Dust undercoat, with an Agrax Wash and a heavy drybrush (maybe Typhon Ash)? Then contrast and a light drybrush of Karak Stone.
He's not the most detailed of sculpts, but he has some quirky charm I quite like. 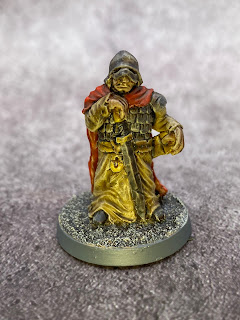 The other model I grabbed was this "Half Dwarf Fighter". His helmet isn't quite in the right place for his eye holes so I thought he was wearing a blindfold at first! I'm classifying that as "quirky charm" too. I think he best suits into a grubby homebrew type system. He feels very much like a grimy 'old school' RPG NPC to me, and Mammoth do produce Brutal Quest. I'm not sure if he's edgy enough for Forbidden Psalm - though I think he'd work if he has some more "out there" companions.
Posted by The Responsible One at 19:00

Email ThisBlogThis!Share to TwitterShare to FacebookShare to Pinterest
Labels: Painting, Salute, This week, to do