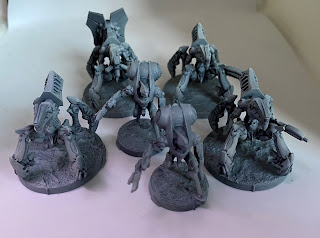 Every faction in Infinity has a number of support "remotes" - small, remotely piloted robots that fulfil a number of different support roles in the force. The Combined Army are no exception. I've got most of the remote options assembled now, although I don't yet have a "T-Drone" - the Combined Army's option for a missile launcher support bot. 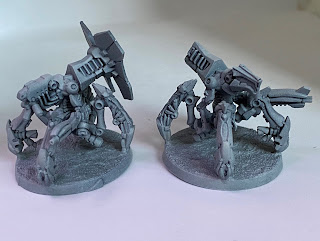 On the left, we have the E-Drone. This remote is packed with support programming and is manned by a hacker. It's able to use programmes that enhance other units in the army. On the right, the feared Q-Drone. This is a defensive robot programmed to lay down a hail of defensive fire as the enemy advance. 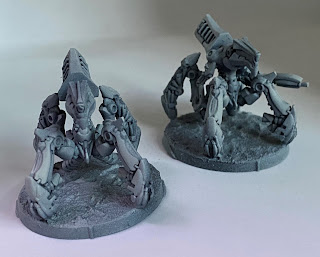 The R-Drone on the left is a simple support bot. It has a small flash-pulse for defence. It's sometimes used for a cheap order, sometimes a cheap area defence piece, and sometimes it utilises it's on board repeater to extend the range of the force's hackers. Meanwhile, the M-Drone on the right is the technical support piece. As well as a Repeater, it carries a Sensor, allowing it to better sweep for hidden enemy troopers. It's also got a suite of features that allow it to act as a Forward Observer - both targeting enemy models to allow easier targeting by other models, and allowing it to act as a Specialist in missions that require them. 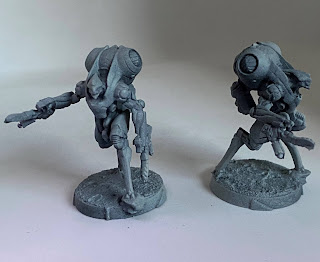 Finally, we have the Ikadrons. These are primarily intended to act as baggage carriers, allowing troops who have run out of limited weapons, such as Mines or Disposable anti armour weapons, to replenish their ammunition. But they're also equipped with Flash Pulses and light flamethrowers, for some terrifying defensive options if needed.
Posted by The Responsible One at 19:00

Email ThisBlogThis!Share to TwitterShare to FacebookShare to Pinterest
Labels: Combined Army, Infinity, Painting, Shasvastii, to do