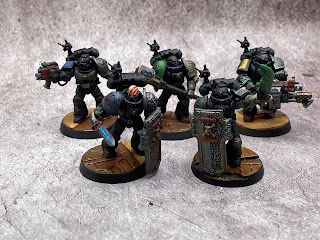 Continuing the Deathwatch I had painted by Squiggle's Studio, here's all the models I have that can go into a Proteus Kill Team - in other words, not Primaris Marines. First up are a squad of Deathwatch Veterans that I got in the Death Masque box. I asked for them to have a variety of models so I could learn how they worked a bit - I'll probably get some more weapons options bought and painted up once I've had some games. 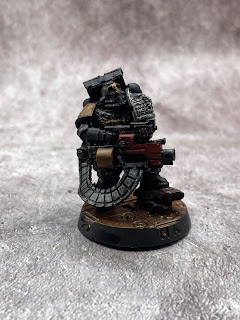 I also had an old Forge World limited edition Minotaur with a Heavy Bolter I'd not been sure what to do with that I realised could be a Deathwatch Veteran with a change of shoulder pad, so he's joined the army. 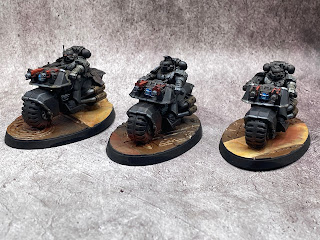 I got three bikes in the "Supply Drop" box that I got as a bit of a gamble. On reflection, it wasn't a great gamble and I probably wouldn't do it again. The bikes and the Arcoflagellants were about all I ended up using from it, and while I could have got a bunch of Chapter specific characters turned into Deathwatch characters, I actually already had a bit of a surplus of Deathwatch characters so they're heading for the eBay pile instead. 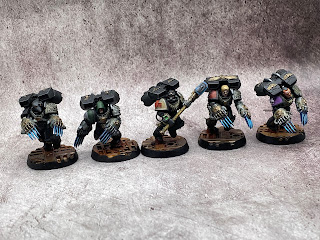 I also got the Vanguard Veterans from Death Masque painted up. I've since learned from Goonhammer that the optimal load out for Vanguard Veterans is widely held to be Lightning Claw and Storm Shield, but for now, they'll have to live with a more aggressive build, and I'll see how they go.
I'm not planning to go Out just yet - infection numbers remain way too high for me to merit it. I'd say "maybe on blah date", but one of my ways of trying to stay together in all this is to plan absolutely nothing that could be impacted by changes in the wider situation. We'll see how it goes.
Posted by The Responsible One at 19:00