Realising you've already achieved a life goal (and not noticed) 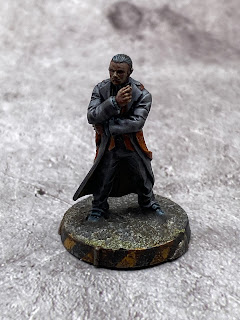 The painting for St Albans Smackdown continues, with some models starting to get finished. Not quite as quick as I'd like, but still getting there. I haven't quite got my photography quite right yet - the models are still ending up a bit darker than I'd want. I might try a darker background and see if that helps the iPhone work it all out.
I was having a little trouble getting going, completely irrationally, so I picked some of the easier models I need to get done to get an early win. First up is this HVT model - he's sold as an "O-12 delegate", but for my Combined Army, he's clearly a Speculo Agent, or maybe a traitor human. 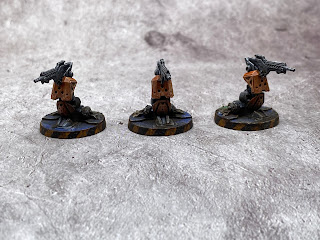 I also got the Defiance Turrets sorted to work as the free defensive turret you get in Countermeasures. They didn't need too many colours to get a perfectly serviceable paint job on.
I had a small revelation this evening while chatting on a Facebook Messenger chat with a bunch of other hobbyists. They were showing the squads they were working on for their 40K armies, and I was reminded one of my "hobby life goals" was working away at an army I was painting all myself for events, picking a few models at a time to paint.
For a moment, I regretted how long it would be until I could get around to that. Then I remembered that while I'd always thought of that in terms of Games Workshop armies, I was actually achieving it, right now, this weekend, with my Shasvastii Infinity army. It was a bit weird to go from wistful looking forward to the future to realising that you're already in the future. 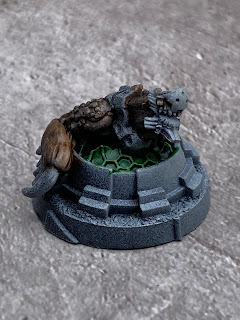 I could have really done with more models being finished by now. The Taigha are about a third done now. Still, if I can get a bit of painting done in the evenings this week and have a slightly more productive weekend next weekend, it's all still totally achievable.
I've got a final practice game for Countermeasures this week. Hopefully, it won't throw up anything I need to change for the list as I really don't have time to paint any additional models! 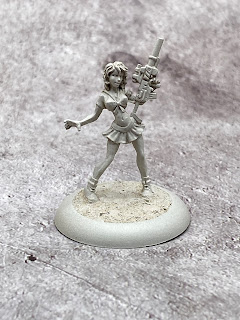 While I was waiting for some contrast to dry I cleaned, assembled and undercoated this Candy figure from the Reaper Chronoscope range. I am exercising a lot of willpower not to paint her while there's still so many Shasvastii needing painting. She should be a fun Contrast paint job once the Shasvastii are done, though. 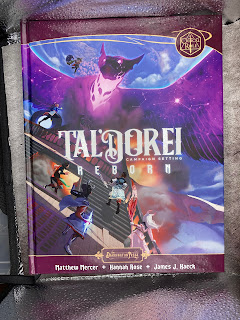 This weeks arrival in the post fortunately doesn't need painting. The Tal'Dorei Reborn book is a Critical Role D&D book, covering the continent the first campaign was set in. It's not an official D&D book, like the Explorer's Guide to Wildemount (the continent of the second campaign), but there is an official Critical Role adventure coming later this year.
I'm reading it as a break when I'm too tired to concentrate on painting, and I'm having a few thoughts about it. I might try and form them into a cohesive blog post once I've finished reading it all, if I can find the time. It might end up being a February article if I do write it. Tournament painting definitely needs to come first!
Posted by The Responsible One at 19:00