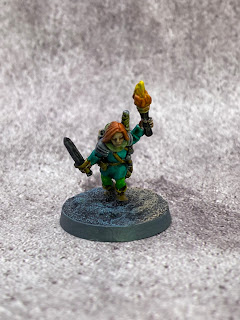 I've got a bit of a deadline at the moment to getthe hobby room tidied so some relatives can use it as a guest room. For a while, this meant that I ended up feeling guilty about painting when I wasn't up for doing tidying, which was a daft thing for my brain to do, because doing something fun with a break means my brain ends up happier.
So I took a deliberate short break to do a little bit of painting, and I had some productive results! First up is this Heroines in Sensible Shoes Halfling Rogue by Oathsworn Miniatures. (You may have trouble reaching their website as it was shut for maintenance for a few days, so I've linked to their Facebook Page.)
I'd ended up with a particularly strong spray zenithal on the model from the side the torch was on, so I decided to play with that a little. Most of the model was painted with contrast paints over the zenithal. I added a little detailing with Kislev Flesh on the face because it was too dark and looked a little weird. As a pure experiment, I drybrushed some light blue and light orange on the sides of the grey base to match the torch, and I think it's ended up turning out really nice. It's a very very lazy "Object Source Lighting" but I think it works and looks nice from a tabletop standard point of view. 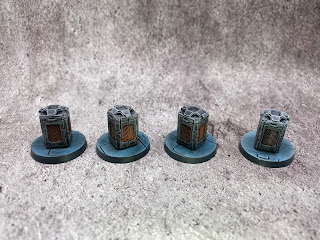 I also threw some quick contrast over the crates for Defiance that I'll likely also use for crates in Infinity for a while until I get something a that's not limited edition that I'm terrified of losing. I feel like I should have drybrushed up the orange panels a little more with white before adding the orange as they're a little dark, but also, life is too short so I'm not going back to them. 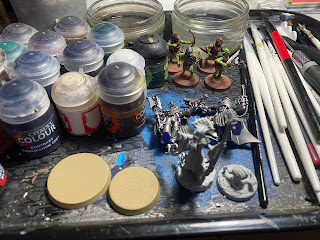 With the things that have been on my desk for ages all finished, what's on my desk now? I'm finishing up some Warlord Games Orcs, which are getting a pretty basic paint job due to them winning the award for Worst Models I've Dealt With All Year. Next up for painting are a couple of Horus Heresy characters to decide if I hate painting Alpha Legion or not, and a Frameworks Mind Flayer and Intellect Devourer, which once painted will get a bit of a review that's been a few months in the making. 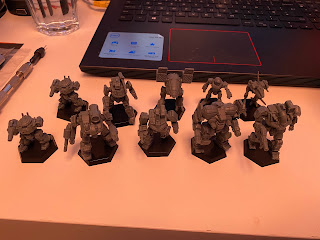 I've taken advantage of a couple of online D&D games I'm playing in to start "assembling" the Battletech Game of Armored Combat boxed set and my Urbanmechs. By which I mean "removing the mould lines". Once that's done and I've added basing paste, their getting undercoated will be a bit weather dependent now, but having them ready to go will be great.
The pace over the next couple of weeks may get a little slower as I hit the crunch for making the hobby room an inhabitable not-death-trap, but hopefully a few bits and bobs will make it onto the blog. I am definitely looking forward to it being done, because then I'll be in a much better place with my hobby space from that point onwards...
Posted by The Responsible One at 19:00