An alien and a real world hero 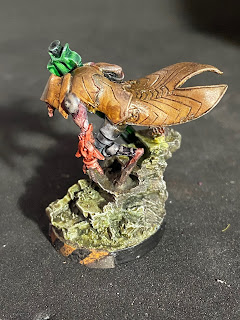 Managed to get a couple of models finished over the past two weeks, as I try and clear the decks to make space to paint the models I need to take to the Malifaux Nationals tournament. Which is . . . not very far away now. And I haven't started painting any Malifaux figures. Oh dear. 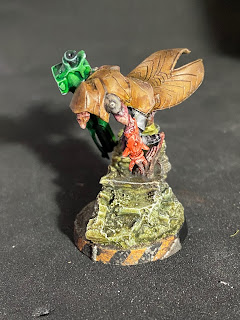 First up is this Shasvastii Noctifer, who I started painting ages ago - before the Corvus Belli "Organised Play at Home" painting competition, which is what I put him to one side to do. He's an older sculpt, and starting to show his age a little bit. 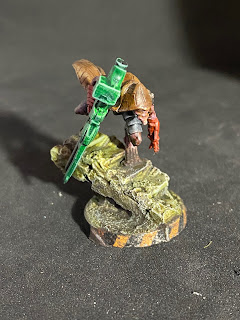 In the game he doesn't deploy on the table, but you make a note of where he's hidden. Because his missile launcher is both long ranged and can put down a template, it can be absolutely devastating in game. Being able to take a reaction order in your opponent's turn and kill several models in a shot can change the course of an entire game. Your opponent can often spend a lot of time second guessing whether or not you've brought one, meaning they end up playing more cautiously than they otherwise would. 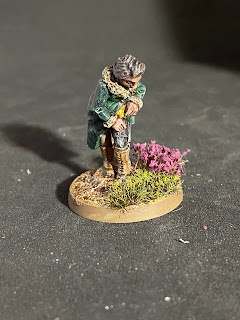 The other painted model is a rare one for this blog - a historical figure. She's made by Bad Squiddo Games, which is incredibly common for this blog . . . 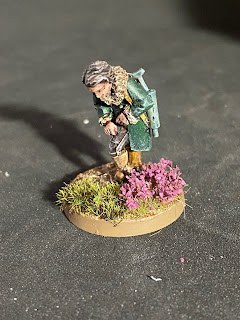 The model portrays Virginia Hall, an American who worked with both SOE and OSS during World War II. She's shown adjusting her wooden prosthetic leg "Cuthbert". I don't have a particular plan for the model, but I'm glad she's painted. I picked her up to support one of Annie's Kickstarters. 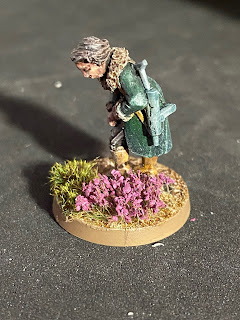 That's all the painting I've got done over the past couple of weeks, although I'm hoping to finish a few more bits and bobs soon. I've got another half finished Shasvastii model (a Gwailo), a bunch of those Aenor goblins I had committed to getting finished in 2019, and another Bad Squiddo figure all on the table.
None of those are Malifaux. I should really fix that. The plan is once the other overdue Shasvastii is done, I'll be getting onto the Malifaux figures . . .
Posted by The Responsible One at 19:00

Email ThisBlogThis!Share to TwitterShare to FacebookShare to Pinterest
Labels: Bad Squiddo Games, Infinity, Painting, Shasvastii, This week, to do