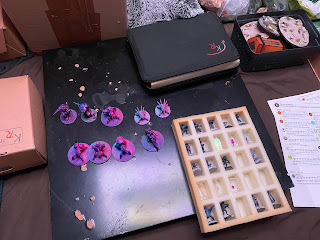 Last weekend I Went To A Tournament. More specifically, I went to the Inaugural Fast Panda Throwdown in Heywood, north of Manchester. I've been watching the Fast Panda YouTube Channel and wanted to show my support of their first tournament. It turned out I was their furthest flung player, coming from London.
While I've been playing getting my Shasvastii on Tabletop Simulator and have been getting quite a few of them painted up, I decided to take my Dahshat Company. Broadly, this was because I've found Taigha Creatures are pretty vital to playing a strong game with Shasvastii, and I currently don't have any assembled. 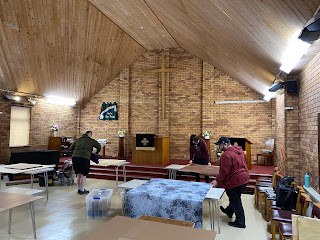 I travelled up the night before and stayed in a hotel before getting a lift to the venue on the day. The venue was a Methodist church. As soon as Slimming World were finished, the tables were brought in and set up.
Organisation was good, with match ups being easily sorted out and a reminder coming around each game to make sure people were aware of time. There were apparently shops pretty close, but it was raining and I'd brought cereal bars to power through, so I didn't explore. 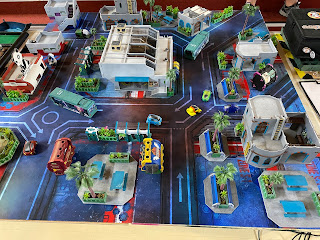 I don't want to write a massive essay covering all three games I had in one post. I'll be posting short reports of each game in future days, but suffice to say I had three really fun games with good opponents.
All in all, it went really well and another event is planned next year. If you're in easy travel distance of the Manchester, UK area, I'd definitely recommend keeping an eye out for future Fast Panda Throwdowns.
Posted by The Responsible One at 19:00