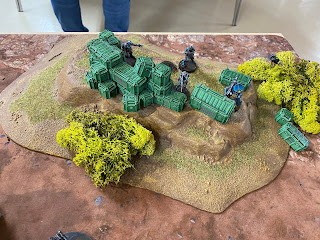 After lunch, opponents were announced and I got to meet Forgedinfury. He was running a beautifully painted Ikari Company force. I was excited to face another mercenary company, but a bit nervous of how much damage was likely coming my way as Ikari Company is a highly aggressive force with some really tough pieces. 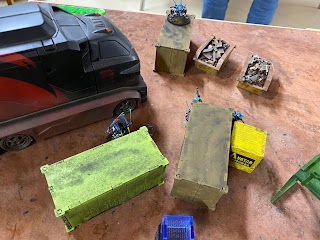 I think I lost the Lieutenant roll, but in any event, Forgedinfury had the first turn, while I picked a deployment side and made him deploy first. I was facing a Keisotsu link on his left flank with a Brawler MULTI Sniper and Tanko Missile Launcher, while a Daiyokai and two Tankos in a Haris on his right.  A Karakuri was well placed to move around the roof of a tall building and move between zones, and Yojimbo also lurked back ready to zoom up the field. 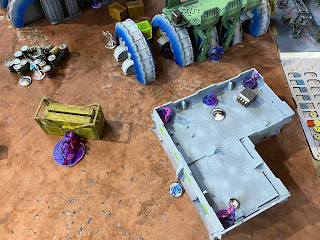 I deployed a Ghulam Sniper link on the right, with a Hulang tucked well back behind some scenery. Libertos got scattered around the mid-field, and a Zhencha joined the Karakuri on the roof. 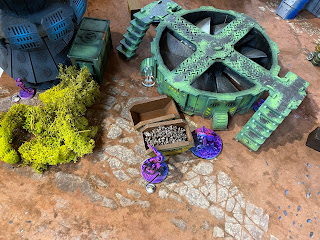 The left hand flank consisted of the Al Fasid and Rui Shi, as I was starting to run out of cover to deploy in and still be able to get out and affect the game! 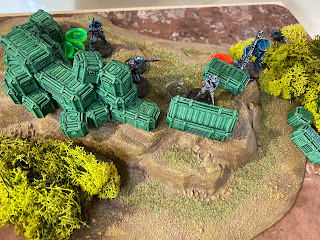 The Ikari defensive link made an effort to take out my sniper link, but I started rolling critical hits and didn't stop. By the time the game ended, I'd rolled about nine, including five from the snipers alone - and mostly in ARO. The Tanko went down to shooting twice. Broadly, they were lacking long ranged high burst weapons, and I'd deployed to it hard for those that did exist to get into a good spot to get into a fight with the snipers. 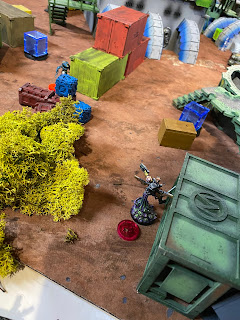 He tried to help his Daiyokai advance with a couple of Yuan Yuan walking in from the side, but they ended up being unlucky and not managing to take out much in the way of targets. 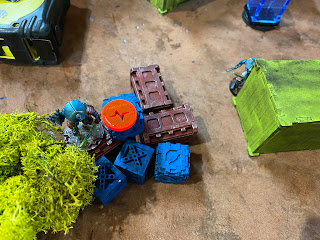 Eventually, the Daiyokai and then a Tanko got unlucky from the Rui Shi and Al Fasid shooting, at which point there just weren't enough attack pieces left to make a break into my table half. I also ruthlessly took advantage of having second turn to score zone control as best I could. 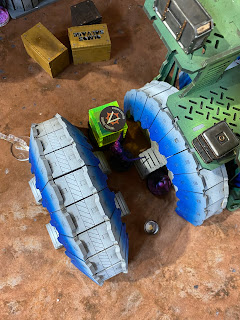 In the end, my relentless criticals were too much, and the game ended in a Dahshat victory. I couldn't quite bring enough to bear to get zone control on the final turn, but picked up two consoles and a classified for a solid 7-0 win, with 259 points left alive to Ikari's surviving 73.
All in all, I was pretty pleased with how this went. I mostly made sure to engage on favourable terms, but was very lucky for the sniper link to survive most of the game when mathematically they should have gone down much earlier.
My initial deployment wasn't great and I think I need to work on it a little bit. I feel I needed a better ARO piece on my left flank, but that might be a problem with the list design that I need to look at for future games. Plenty to think about . . .
Posted by The Responsible One at 19:00